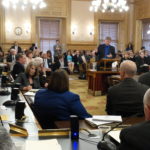 Topeka ? Gov. Sam Brownback offered his long-awaited plan Wednesday for digging the state out of its budget hole, suggesting the state should borrow from its idle funds and use other one-time sources of money to get through the final two years of his administration — a plan that critics blasted as ‘delusional’ and irresponsible.

The plan also calls for raising some taxes, particularly “sin taxes” on cigarettes, tobacco and alcohol, but does not include repealing the so-called LLC loophole that exempts more than 330,000 farmers and business owners from state income taxes altogether.

Republican leaders in the Legislature said it might form a “baseline” for the final budget that lawmakers pass, but Democrats called it “delusional” because they say it does not address the state’s long-term financial problems.

“There are some avenues that we’re probably going to be able to use as a groundwork for the budget that we’re going to craft,” said Rep. Troy Waymaster, R-Bunker Hill, who chairs the House budget committee. “There are some pieces that I just don’t think this body would be willing to entertain.”

“The governor is delusional if he thinks somehow we’re going to raise all these taxes again on working people and not touch those 330,000 business owners,” Sawyer said.

Lawmakers opened the 2017 session facing an immediate $340 million revenue shortfall for the remaining six months of the current fiscal year.

That means, in order to finish the year with any amount of ending balance in the general fund, they must cut $340 million in spending, or find that much in new revenue, or do a combination of both.

Brownback’s plan depends largely on using a one-time source of money that has rarely, if ever, been used in Kansas, borrowing out of state idle funds accounts and paying it back over seven years.

Brownback is asking to borrow $317 million in idle funds, typically fee-generated money held by various agencies and managed by the Pooled Money Investment Board.

He also proposes cashing in about $45 million in interest the state has earned on investments from the unclaimed property fund and collecting another $27 million in accrued interest on other PMIB investments and sale of the Kansas Bioscience Authority.

Additionally, he proposes freezing state payments into the Kansas Public Employees Retirement System at their 2016 levels, saving $86 million for the general fund.

That adds up to $475 million in additional revenue and reduced costs. But that would be offset by some additional expenditures, mainly related to formula-driven costs in Medicaid and K-12 school funding.

If the Legislature accepts that plan, it would leave the state with an ending balance of $99.6 million on June 30.

Brownback’s plan for the next two years, the final two years of his administration, calls for gradually rebuilding the state’s ending balances, but that plan also relies heavily on one-time sources of funding, coupled with some modest tax increases.

Chief among the one-time funding sources would be to sell off the state’s future tobacco settlement payments in exchange for a lump-sum payment of about $530 million, which would be spread out over both years.

It also calls for continuing to siphon money out of the state highway fund: $288 million next year and $293 million the year after that.

In addition, Brownback’s plan would extend the freeze on KPERS payments for both years.

Brownback also is proposing to save money in future K-12 education costs by putting all public school teachers and staff into a single, state-run health insurance plan. Currently, those benefit packages are negotiated separately by each school district and its teachers union.

Meanwhile, there would be no increase in base K-12 education funding, and for higher education there is no provision to restore the 4 percent cut in base funding the governor ordered last year, which resulted in a $10 million funding cut for the University of Kansas’ Lawrence and Medical Center campuses.

The plan does, however, call for restoring the 4 perent cut in Medicaid provider reimbursement rates that were also part of the allotment cuts that Brownback ordered last year.

The plan would also continue to freeze state KPERS payments at the 2016 level, and the $92.6 million payment that was delayed at the end of the last fiscal year would not be repaid as originally planned. Instead, it would be added to the pension system’s unfunded liability.

Brownback also is proposing what he called “modest, targeted” revenue increases, although he remained adamant in defending the business tax cuts he championed in 2012, which is estimated to cost the state about $250 million a year.

One proposal would reimpose taxes on one form of nonwage business income, known as “passive” income, derived from rents and royalties received by people who are not directly involved in a business operation. That would generate an estimated $40 million a year.

Other tax proposals include:

• Freezing the bottom income tax rate at 2.7 percent, instead of allowing it to drop as scheduled a tenth of a point next year.

• Increasing the annual report filing fees on for-profit entities from $40 to $200.

• Raising cigarette taxes by $1 a pack.

• Doubling the tax on other tobacco products to 20 percent.

• And doubling the liquor enforcement tax to 16 percent.

All told, those taxes would raise an estimated $179 million next year and $199 million the year after.

As lawmakers were being briefed on the budget plan, hundreds of people from a diverse set of liberal and progressive interest groups were rallying in the Statehouse rotunda, with many of them focusing on the state’s conservative budget policies of the last several years.

“Our state’s disastrous deficit is not first and foremost evidence of failed fiscal policies. It is evidence of something far more perilous, evidence of a moral deficit,” said the Rev. Tobias Schlingensiepen, head of the Topeka Center for Peace and Justice and an unsuccessful Democratic candidate for Congress in 2012.

The rally brought together a wide range of interest groups that included advocates for education, health care and children’s programs — along with those interested in environmental issues, racial equality and LGBT rights, among others — uniting behind what they called a “Kansas People’s Agenda” that would be starkly different from the socially and fiscally conservative agenda that has dominated the Legislature during the Brownback administration.

Other groups also responded directly to Brownback’s budget plan, including Duane Goossen, a former budget director under Govs. Bill Graves and Kathleen Sebelius, and who is now a senior fellow at the Kansas Center for Economic Growth.

“Borrowing a lot of money, selling important assets, further de-funding roads and bridges, and canceling payments to our state retirement system are all temporary stopgaps that we’ve tried and failed before,” he said in a news release. “This is the 10th budget crisis Kansas has faced since the Governor’s tax plan took effect, and the budget offered today will all but ensure an 11th.”

Meanwhile, within the House and Senate, where Democrats and moderate Republicans made big gains in the 2016 elections, reaction to Brownback’s budget plan ranged from a “wait-and-see attitude” to open hostility.

“It is shocking how disconnected this governor is to reality,” said House Democratic Leader Jim Ward, of Wichita. “He raises taxes by almost $400 million and still continues to allow 330,000 people to pay nothing. It’s just totally disconnected from reality. “

Senate Minority Leader Anthony Hensley, of Topeka, said the plan is designed only to get the state through the end of Brownback’s term in January 2019, and that it would leave the state with huge bills to pay after he is gone.

“This guy is the most irresponsible governor and leader I’ve ever seen, in terms of leading our state, and I have served with eight different governors, Democrats and Republicans,” Hensley said. “I had my problems with (former Gov.) Mike Hayden (1987-1991), but right now Mike Hayden’s looking pretty good to me.”

Waymaster said there are parts of the governor’s plan that might pass the Legislature, including the idea of borrowing $317 million from idle funds this year. But he said it is unlikely that lawmakers will go along with the plan to cash out the state’s future tobacco settlement payments.

In addition, he said that he believes lawmakers will not go along with Brownback’s proposed tax increases without at least considering repeal of the so-called LLC exemption.

“A lot of members were probably elected mainly on that point, and they would like to have a vote to see if we can reinstate the income tax on LLCs and other businesses that currently aren’t paying income taxes,” he said.

Senate Vice President Jeff Longbine, R-Emporia, was skeptical that Brownback’s plan did not appear to offer a long-term solution to the state’s financial problems.

“At first blush, it looks like there’s some of it that’s kicking the can down the road,” he said. “I’d much rather face the music and structurally fix the problem.”

Longbine was less optimistic than Waymaster that borrowing from idle funds would pass the Legislature, but he said most senators, like most House members, will insist on voting to repeal the LLC exemption.

“I think that’s a vote that a majority of our caucus wants,” Longbine said.