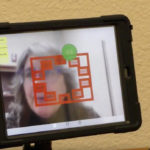 This screengrab from a University of Kansas video shows the Adaptive Use Musical Instrument in use on an iPad. The AUMI is a computerized instrument that allows people — including those who are physically disabled with little or no voluntary movement — to make music.

A group of University of Kansas professors has received a $35,000 grant to put on a symposium all about AUMI, the Adaptive Use Musical Instrument.

KU announced the grant, from the National Endowment for the Arts, on Thursday.

The AUMI is a computerized instrument that allows people — including those who are physically disabled with little or no voluntary movement — to make music. According to KU, AUMI software can be installed on any computer equipped with a camera. The camera captures body movement and triggers sounds ranging from bells to drums to synthesizer tones, with as little movement as a small tilt of the chin.

Sherrie Tucker, KU professor of American studies, has written extensively about musical performance and worked with the AUMI for nine years, almost as long as it has been created.

“I’m interested in the ways people create new forms of community by playing music together, and this project really grabbed me,” Tucker said in a KU news release.

The new grant follows a series of performances enabled by a $10,000 Starter Grant, awarded earlier this year by KU’s The Commons. The planned symposium is set for August and will tentatively include a weeklong workshop for people with limited mobility, a community performance with a guest artist and a meeting of an international research consortium dedicated to further developing the AUMI.