School board votes unanimously to purchase 4,000 MacBooks for district 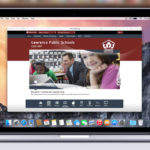 The Lawrence school board on Monday voted unanimously to approve the district’s purchase of 4,000 MacBook laptops.

The $2.8 million investment will go toward the implementation of a 1-to-1 device program at Lawrence High School and Free State High School, where each student will be issued a MacBook starting next fall. The purchase will also provide about 30 spares per high school, plus a handful to be distributed to blended-learning classrooms across Lawrence’s elementary schools.

Jerri Kemble, assistant superintendent of innovation and technology, stressed once again before the board took its vote that the district has already put in place a “foundation” to ensure a successful rollout of the MacBooks. Three years ago, each teacher was issued a laptop by the district, and since then, Kemble said, the district has provided professional development for teachers looking to integrate technology into their lesson plans.

“Currently we have over 300 blended-learning classrooms in the district with teachers that have had this training and support. We’re not simply handing out technology and expecting teachers to teach differently,” Kemble said, later adding, “This isn’t just a step that we haven’t thought about. You guys have put a lot of time and effort into this, and it’s been very much appreciated. I feel that we have a staff that’s ready for it, and we’re ready to move forward.”

It’s also time, Kemble said, to catch up to other districts in the state, which she said have been rolling out their own 1-to-1 programs for “well over a decade” now. But the decision to purchase the MacBooks, she said, wasn’t a hasty one.

Shannon Kimball, the school board’s vice president, expressed similar sentiments Monday night. Addressing comments she had seen online about the 1-to-1 initiative, Kimball said district staff had considered several devices — among them, Google Chromebooks and other non-Apple products — before ultimately narrowing the options to the MacBooks and iPads chosen for last fall’s pilot program at Free State and LHS.

Part of that decision, she said, was comparing product liability, durability, price and the tech support offered by each company. In the end, after the semester-long pilot program at both high schools, more than 70 percent of the teachers and administrators serving on the district’s Digital Learning Task Force found the MacBook to be the more effective learning tool of the two Apple devices.

“So, I don’t have any concerns that we haven’t thoroughly vetted this decision in terms of picking a particular device,” Kimball said.

The $2.8 million MacBook purchase will also include heavy-duty cases for each device, and, like last year’s rollout of 5,000 iPads in Lawrence’s middle schools, will be acquired through a lease-purchase agreement with Apple. As part of the agreement, the district will pay an interest rate of about 1 percent over a four-year period.

The arrival of the MacBooks in high schools next fall will also, tentatively, come with digital citizenship training (how to use the internet safely and responsibly, essentially) for students and families.

“I think you’re going to have some happy high school students tomorrow,” Kemble told the board after its final vote. “Thank you.”

• Heard a summary report from Anna Stubblefield, assistant superintendent of educational support and equity, on January’s Community Conversation on racial equity. Among the goals to emerge from those discussions were better publicizing where and how to report incidents of bullying or microaggressions, a teachers’ professional development day focused on culturally relevant curricula slated for next month, and introducing a system that would track patterns of harassment — i.e., which students are being targeted frequently, and which students are frequently targeting others.

• Heard a report from Kathy Johnson, the district’s director of finance, on bills circulating in the Kansas Legislature and how those bills might affect K-12 schools in the state. The report also provided an update on the district’s budget. Planning can begin on the 2017-2018 budget, Johnson said, once the Legislature determines funding for that period.