Lawmakers question KanCare officials ahead of federal review; critics blast system while some officials deem it a success 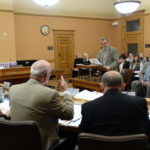 Topeka ? State Medicaid officials told lawmakers Friday that the privatized health care system known as KanCare is improving services for patients while saving the state an estimated $1.4 billion a year.

But a number of people involved in the program, including beneficiaries, told a very different story, saying the system is plagued with problems, and some lawmakers suggested that the savings are the result of denying claims and reducing services in order to boost profits for the three private insurance companies that now manage the program.

All that came just weeks before federal officials are scheduled to be in Kansas to review the system again and determine whether Kansas should be given another year to operate its Medicaid program as a privatized system.

In January, the federal Centers for Medicare and Medicaid Services, or CMS, declined to renew a waiver the state has been operating under since 2012, saying the program was “substantively out of compliance” with federal laws and regulations and that the noncompliance “places the health, welfare, and safety of KanCare beneficiaries at risk.”

“I don’t agree with the language,” Randol said. “They really did not point to any documentation, any analysis that provided that conclusion for them.”

Earlier in the hearing, Department of Health and Environment Secretary Susan Mosier read off a list of statistics that she said were signs that KanCare is producing better results than the Medicaid program did before it was privatized.

Among those figures were increases in the number of members seeing their primary care physicians, fewer inpatient hospital stays and a slight decrease in the use of emergency rooms.

All that has occurred, she said, while the number of people enrolled in the program has grown substantially.

According to figures from KDHE, there are nearly 40,000 more people enrolled today in Medicaid, the Children’s Health Insurance Program and other related health care programs than there were in January 2012.

Had that growth occurred under the old Medicaid system, where costs had been climbing at a rate of about 7 percent a year, Mosier said the Medicaid program would cost about $1.4 billion a year more than it does today, including both state and federal funding.

Before Mosier spoke, however, the committee heard testimony from people who work in the KanCare system as well as beneficiaries, and they painted a very different picture of the program.

Kimberly Westhusing-Kass, a Leawood attorney who practices in Kansas and Missouri, said the insurance companies managing KanCare — known as Managed Care Organizations, or MCOs — have found creative ways to cut costs for elderly and disabled people receiving home- and community-based services by shifting the burden of care onto family members or other “capable” people in the household.

One way, she said, is by coercing family members or other people in the household to provide personal services at no cost that would otherwise be reimbursed by Medicaid.

Federal law does allow for such “natural supports,” she said, but only if they are done voluntarily. But when state budgets are tight, she said, Medicaid officials will often institute what she called a “crackdown” by expanding the definition of natural supports and coercing family members to provide them at no charge.

“Unfortunately, such a crackdown is currently underway by the MCOs in Kansas,” she said. “In reviewing plans of care under the HCBS waiver, they are systematically making determinations in every case that even though an individual received a specific number of hours for certain services, and nothing about their need for such services has changed, because there is a ‘capable person’ living in the household, they are no longer going to pay for such services for the individual.”

In the early 2000s, she said, she filed a federal lawsuit against the state of Missouri for such practices on behalf of several individuals and eventually prevailed.

“In addition to being illegal under federal law, this practice is utterly appalling,” Westhusing-Kass said.

John Esslinger, chief medical officer for United Healthcare, one of the three MCOs, denied that his company was coercing family members into providing nonreimbursed care, and he said United follows guidelines from KDHE about what services qualify as “natural supports.”

“It sounds like there is some discrepancy between what CMS is saying and what the state felt that they could do, and of course our obligation is to be in line with whatever the state’s telling us to do. Now, if CMS says ‘no, that’s not right,’ clearly CMS is going to trump the state’s existing policy and it would need to change.”

“To my knowledge, we have never, ever coerced anyone to do anything,” he said.

Officials from the other MCOs, Sunflower Health Plan and Amerigroup, both testified that customer surveys show the Medicaid beneficiaries enrolled with them are highly satisfied with their services.

Others testified that home care providers are often paid as little as $10 an hour, with no fringe benefits, and they are limited in the number of hours they can work because the state will not pay overtime rates.

Referring to the report about $1.4 billion in cost savings, she asked, “If we’ve had that much cost savings, why are we paying people $10 an hour, and why do we have waiting lists? Where is this money?”

Randol, however, explained that the $1.4 billion only represented the difference between what the state is spending now and what the agency says it would be spending if it had not switched to a privatized, managed care system.

He also denied that the savings being produced by KanCare were coming from any of those types of measures. He said it was because the MCOs manage and coordinate patient care more effectively than would happen under a traditional fee-for-service system.

The waiver that allows Kansas to operate its Medicaid system in that form expires Dec. 31. Officials from CMS are scheduled to conduct another on-site review in March that will include public meetings on March 20 and 21.

KDHE officials submitted a “corrective action plan” on Feb. 17, explaining how they intend to address the deficiencies that CMS reported in January. They said will submit another application to extend the waiver in April.