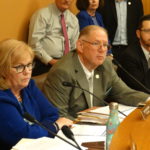 Topeka ? A Kansas House committee voted Monday to table a bill that would have extended Medicaid coverage to an estimated 181,000 people, a move that may effectively kill any hopes of expanding Medicaid during the 2017 session.

Rep. John Barker, R-Abilene, offered that motion in the House Health and Human Services Committee, arguing that he didn’t think the state should make any major new financial commitments until it hears from the Kansas Supreme Court on the pending school finance lawsuit, which could force the state to spend hundreds of millions in additional money on K-12 education.

State Medicaid officials estimated the expansion would have cost the state about $52 million a year once fully implemented, and that it would bring in nearly $1 billion in federal health care money.

Supporters of the expansion said that money could help save many small hospitals in the state that are struggling financially because the state hasn’t expanded Medicaid.

Rep. Jim Kelly, R-Independence, said he represents a city where a community hospital did close last year, and he has seen firsthand the impact that had on the community.

But opponents argued that government cannot afford to pay the cost of extending health care coverage.

“I look at where we’re going to be five years from now when it comes to paying the piper. It’s going to cost more,” said Rep. Willie Dove, R-Bonner Springs. “And right now, we’re in a situation with our government where we don’t have more, and yet individuals are asking for more. You can’t get blood from a turnip.”

Monday’s vote leaves the bill’s fate in the hands of House Speaker Ron Ryckman Jr., R-Olathe, who has authority to use a procedural move that would exempt the bill from the ordinary deadline, but there was no immediate word from Ryckman’s office about whether he intends to do that.

“I’m disappointed by today’s vote,” said Rep. John Wilson, D-Lawrence, who is the ranking Democrat on the health committee. He said he had been given assurances that the bill would go through a fair process in the committee.

“I hope the chair and Speaker will allow us to come back and vote on the bill on April 3,” Wilson said.

Rep. Susan Concannon, R-Beloit, who is vice-chair of the committee and a major supporter of the bill, said she would urge Speaker Ryckman to exempt the bill from Thursday’s deadline.

“I don’t think this is the way to handle something, if we’re going to have a real and honest debate,” she said. “That was a sign of desperation.”

Currently, Kansas only offers Medicaid to working-age adults if they have children and earn less than about 38 percent of the federal poverty level, or $7,644 a year for a single parent with two children.

Under the Affordable Care Act, however, states can expand eligibility to cover all working-age individuals or families with incomes up to 138 percent of the poverty level, or $27,821 a year for a family of three, and the federal government would pay about 93 percent of the cost of covering that expansion group.

But that didn’t reassure lawmakers like Rep. Randy Powell, R-Olathe.

“I would say even if the federal government could pay 100 percent of this and continue on, it’s not money falling from heaven, people. This is money that’s being printed,” Powell said. “That, in essence, is theft because we don’t have the value backing that currency.”

If Ryckman chooses not to exempt the bill, lawmakers still have one other avenue to resurrect it, but it would require a supermajority of 70 members to vote to bring the bill out of committee. Under House rules, the bill then would have to be debated on the floor the following day.