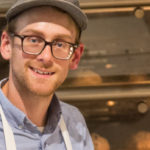 Taylor Petrehn, who co-owns Lawrence’s 1900 Barker with his brother Reagan, has been named one of 20 semifinalists in the “Outstanding Baker” category. The eastern Lawrence bakery and cafe, at 1900 Barker Ave., specializes in naturally leavened breads, seasonal pastries and handcrafted coffee. Petrehn, a graduate of Johnson County Community College’s culinary program, opened 1900 Barker with his younger brother in 2015.

As a James Beard semifinalist, Petrehn joins a “prestigious” group of chefs and food-industry professionals from across the country in the honor, selected from a list of more than 24,000 online entries, according to a press release.

The James Beard Foundation Awards, for those not in the know, have long been considered the “Oscars of the food world.” Final nominees, to be determined by a nationwide panel of 600 judges, will be announced March 15. The same panel of judges will then name the winners in each category on April 25. For more information on this year’s awards, including a full list of semifinalists, visit www.jamesbeard.org/awards.