City attorneys to review issue of skydiving at airport 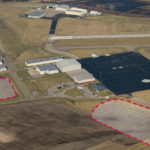 This aerial photograph from March 17, 2009, shows the Lawrence Municipal Airport. This view is from the southeast looking to the northwest. The three areas framed with a red dashed line have been determined by an off-site Federal Aviation Administration study to be potentially safe to accommodate parachute landings, as long as certain provisions are met. However, the Lawrence City Commission will still have to determine whether skydiving should be allowed at the airport, and that decision likely will not come as early as this week.

No action will be taken on skydiving drop zones at the Lawrence Municipal Airport until city attorneys complete a legal review of the issue, the Lawrence City Commission decided at its Tuesday meeting.

An off-site safety assessment by the Federal Aviation Administration indicated that three areas at the airport could safely accommodate parachute landing areas for skydiving, but city leaders want to know if that means they have to allow the activity.

“My big deal is, I just want to know what the rules are, and if we’re being told that absolutely we have to do this,” City Commissioner Mike Amyx said.

City Attorney Toni Wheeler told the commission that the city has not directly asked the FAA what would happen if the city decides to disallow the activity, but that people could potentially petition the FAA as a result. At issue would be federal grant money from the FAA, which provides 90 percent of the funding for improvements at the airport.

Several people expressed concerns about allowing skydiving at the airport and how it could negatively impact the other operations that use the facility, particularly the air ambulance service LifeStar.

Greg Hildenbrand, executive director of LifeStar of Kansas, told commissioners that the company has previously operated alongside skydiving drop zones, and that safety is not the only factor. Instead, he was concerned about the possibility of delays, which he said could be up to 15 minutes should a skydiver miss the drop zone. For that reason, Hildenbrand said skydiving and EMS are “incompatible uses” of the same airspace.

“Time is very critical in determining whether that person is going to survive,” Hildenbrand said. “…Time is critical, and we count that time in minutes.”

Concerns were also voiced about the effect on other operations at the airport.

Lloyd Hetrick, a pilot who operates out of the Lawrence airport, said he has talked to some pilots who said they would make other arrangements if the airport were to allow skydiving.

“I do think there’s a lot of loss,” Hetrick said. “The operation at the airport will be affected.”

But not all those who spoke expressed reservations.

Skydiving operator and Lawrence resident William McCauley criticized the city for what he said was an unfriendly attitude toward skydiving. McCauley, who has previously submitted a proposal to operate a skydiving business at the airport, said the procedures were already in place to ensure safety of the existing operations and skydiving. He also said that concerns about LifeStar delays were overblown.

“There is plenty of opportunity for us to coexist,” McCauley said.

The FAA looked at eight proposed parachute landing areas and determined that three were safe as long as 13 provisions were met. The FAA also determined it would be safe for skydiving to operate alongside LifeStar by placing approximately four-tenths of a mile between the parachute landing area and the helicopter operation. The memo regarding the assessment that was provided to the city did not specifically address the concern of delays.

Since 1929, the city has owned and operated the airport, which is located on U.S. Highway 24 and covers nearly 500 acres. The airport averages more than 100 daily flight operations of single-engine, twin-engine and business jets, according to the city’s website.

City Manager Tom Markus told the commissioners that before they could decide, they needed to know how much authority they had on the issue.

“I’m not taking a plus-minus position on this issue, I’m saying you should be clear about what the FAA is telling you and whether you have any discretion in the end,” Markus said.

The legal and AAB reviews are expected to come back before the commission in 90 days.

• Voted to take ownership and initiate the restoration of the Santa Fe train depot in East Lawrence. The $1.5 million restoration of the mid-century depot will be funded largely by a $1.2 million federal transportation grant. The restoration will begin in late summer or early fall and should be completed sometime in 2018.

• Voted to extend an agreement for Greyhound bus service to use the city’s right-of-way at East Sixth and New Hampshire streets as a bus stop. Greyhound has been using the right-of-way free of charge for the last 14 months while the company attempted to pursue other arrangements. The commission extended Greyhound’s deadline to March 14 and directed staff to continue negotiations with Greyhound regarding a proposal to use a location near the Lawrence Public Library as its stop.

• Authorized $11.3 million in energy-efficient improvements to lighting, heating and cooling systems, and other city equipment. Lawrence-based 360 Energy Engineers will be the general contractor for the project. 360 Energy Engineers completed an energy audit of the city’s facilities, and a performance contract guarantees that the energy savings will cover the costs of the bonds that will be issued to fund to the improvements.

• Voted to authorize the demolition of a vacated home at 1305 New Jersey St.