KU chancellor search: Where do university CEOs come from?

University presidents hired after searches involving Bill Funk’s consulting firm are overwhelmingly academics, to the tune of about 90 percent, he said. Within that group, at least at top research universities, they’re overwhelmingly provosts.

The firm casts “a wide net” when recruiting and tries to pull in candidates who come from business, philanthropy and other positions in academia, too. Occasionally, Funk said, one of those gets hired.

Funk is president of R. William Funk & Associates, the search firm hired by the Kansas Board of Regents to assist with the search for KU’s next chancellor. Funk & Associates consulted in the search that led to the 2009 hiring of KU Chancellor Bernadette Gray-Little — herself a former provost, at University of North Carolina-Chapel Hill — who announced in September she’ll step down at the end of this school year. 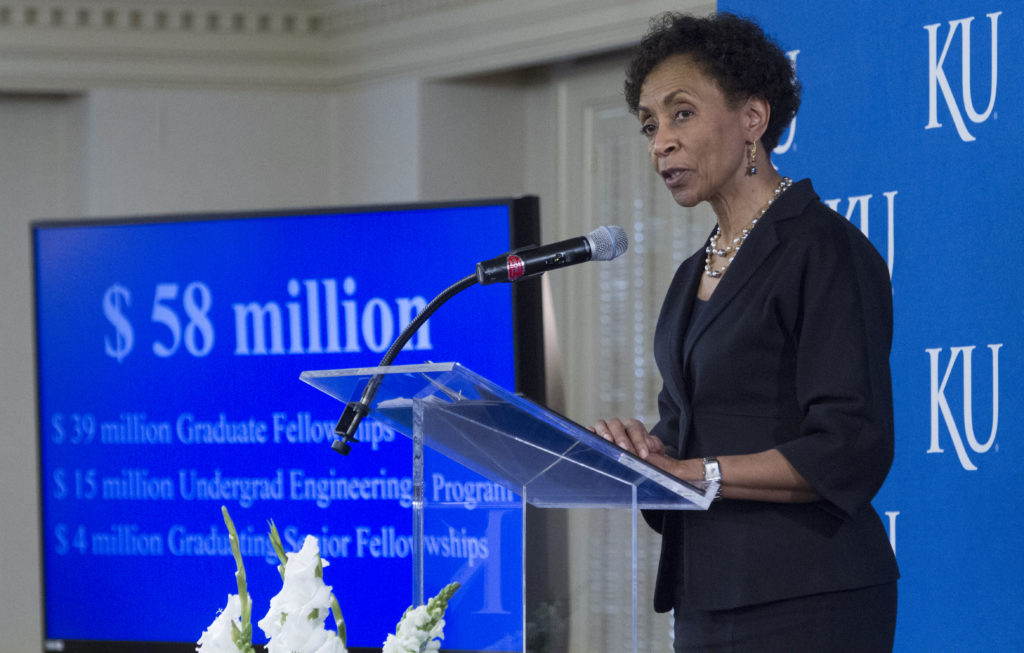 Kansas University chancellor Bernadette Gray-Little announces a 8 million gift from the estate of two late KU alumni, Madison 'Al' and Lila Self. The gift will go toward scholarships and fellowships for students in science, technology, engineering, mathematics, business and economics. The donation brings the Selfs' donations to a total of 06 million, the most in university history.

Who KU’s next chancellor will be is still anyone’s guess. The application process has not yet been formally opened, though it will be soon.

Funk informally discussed past searches at a recent open forum to gather feedback from KU community members on what they’d like to see in their next chancellor. He said his firm has conducted more than 400 searches, including searches at about two-thirds of schools in the prestigious ranks of the research-focused Association of American Universities, of which KU is a member.

National data about university presidents reveal some characteristics, as well.

At doctorate-granting public universities, according to that study, the greatest percentages of presidents are white, male and in their early 60s.

The most common previous position is as a university provost or chief academic officer, or other senior academic affairs administrator.

Their most common academic discipline is the social sciences, followed by education or higher education.

Changes in those demographics won’t be known until the new study comes out later this year. But past changes could shed some light on what’s to come for doctorate-granting institutions, private and public.

In 2011, 59.5 percent of presidents were previously provosts or other senior academic affairs executives, compared with 54.5 percent in 2006, according to the study.

Washington, D.C., based reporter Rick Seltzer covers higher education business management and leadership for Inside Higher Ed, including stories about some university CEO choices that are either very controversial or “fail spectacularly.”

He said an institution’s current leadership, challenges and political climate tend to bear on what kind of person is picked as its new president — and should.

“It’s a very political role,” Seltzer said. “You bring in someone who isn’t ready for that, or misjudges the constituencies, or doesn’t have the backing of the board… there’s just land mines.”

An example could be a campus with faculty unrest, where the hiring board might want to strongly consider a provost or internal candidate, Seltzer said. For a campus with complex challenges, the board might favor a candidate who’s been a university CEO before and steered that campus through similar problems. Major campus players, like sports, should be considered, too.

“Has this person ever interacted with big-time athletics?” Seltzer said. “The academic side doesn’t like to talk about the fact that that matters, but it does at institutions like the University of Kansas.”

When it comes to choosing candidates without a background in academia, Seltzer said the risk can be high.

Last year, the president of Mount St. Mary’s University resigned following national furor over a leaked statement that he compared (in the context of retention) struggling freshmen to bunnies that should be drowned and suggested an aggressive program that would allow those at risk of failing to drop out early. Seltzer said Simon Newman, a former businessman, had come into the position with a “shakeup attitude” and also fired two professors, though they later were reinstated.

Upon Newman’s departure, the board chair did note that he’d developed a strategic plan and helped strengthen the university’s finances.

“Search committees and boards are looking more at candidates who are from alternative backgrounds,” Seltzer said. “When you bring in someone from the private sector who’s not familiar with the way higher ed works, there is a steep learning curve.”

Kansas State University’s new president is from a nonacademic background: the military.

Hired in November after serving as interim president, K-State president Richard Myers is a retired four-star general and the former Joint Chiefs of Staff chairman.

At KU, the chancellor search committee is crafting a candidate profile statement that will be used in the job posting once it’s approved by the Kansas Board of Regents, which could occur at this month’s regular meeting.

Applicants’ names won’t be publicly released because the Regents chose a closed search process, meaning that the only person planned to be publicly announced will be the person the board ultimately hires. 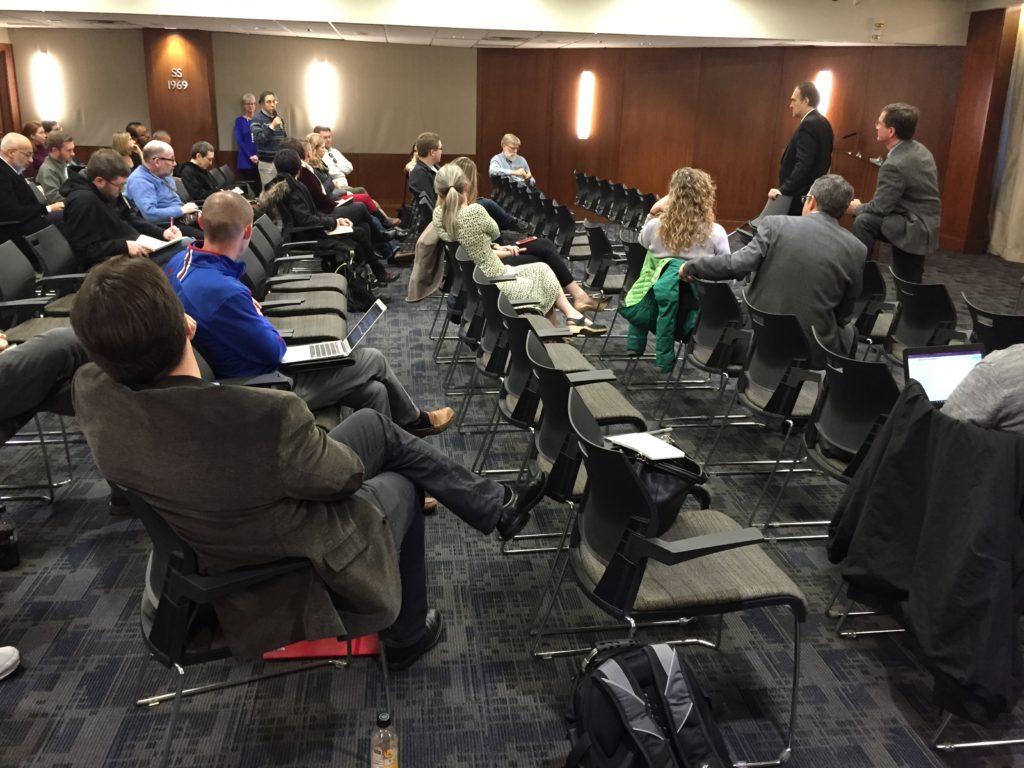 University of Kansas students, faculty and staff offer thoughts on traits they'd like to see in KU's next chancellor Tuesday, Jan. 10, 2017, at the Kansas Union. David Dillon, chairman of the KU chancellor search committee, and Bill Funk, president of the search firm R. William Funk and Associates, led the open forum.

At the recent open forum, Funk and KU chancellor search committee chairman David Dillon indicated open-mindedness for candidates outside academia — as long as they are familiar with higher education.

Dillon said, speaking personally, he wouldn’t restrict the search to academics only but also wouldn’t “throw it wide open.”

“In my view, someone who doesn’t have a really, really deep appreciation for higher education would not make a great chancellor,” Dillon said. “But at the same time, I don’t necessarily think they need to have spent their entire career in higher education.”

Funk said candidates’ responses to questions about things like tenure or shared governance can be telling.

Funk and Dillon agreed with forum speakers that considering diversity also is important.

Funk noted that his firm has “broken the color line and the gender line” in some 30 institutions across the country.

KU is one of them. Gray-Little is KU’s first female and first black chancellor.

Dillon said that a candidate doesn’t necessarily need to be a minority but whoever it is should be able to champion diversity at the university.

“It’s clear to me it’s important to this campus,” Dillon said. “I am of the opinion that diversity and cultural appreciation is a very high topic, and needs to be.”

(Ever worked outside higher education — 30 percent)