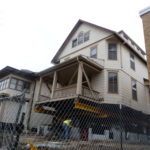 St. John Catholic School’s much-anticipated $3.3 million renovation is finally off the ground, both figuratively and literally.

Crews on Wednesday morning entered the project’s first phase by picking up and moving “The Convent,” as it’s lovingly known in the St. John community, from its original location near 12th and Kentucky streets to 1229 Vermont St. The former Sisters of Charity Convent (in recent years, it’s been used as additional meeting space for the parish) now sits snugly between the school and St. John’s existing parish center.

“This is the first big piece,” said Samantha Romero, director of stewardship and development at St. John. Moving “The Convent,” which will receive minor upgrades (new carpet, paint and such) as part of the $3.3 renovations, allows the school to move ahead with building a new full-sized gymnasium where the old house once stood.

Other improvements include the conversion of St. John’s current gym into an arts center that Romero says will better serve the school’s expanded visual and performing arts programs. The new center, slated for completion by winter 2017, will include a stage and seating, lighting and sound systems, a catering kitchen and a permanent display area for student artwork.

So far, St. John has raised about $2.6 million of its $3.3 million total budget. It’s enough for crews to get started while the fundraising campaign continues, Romero said.

Originally, it was suggested that “The Convent” be torn down to make way for the school’s new gym. But one St. John parishioner, an architect, saw the value in the old house. And after conducting a feasibility study and sharing its results with the St. John congregation, fellow parishioners “resoundingly” agreed, Romero said.

Measurements were taken and, sure enough, the building fit nicely between the school and St. John’s parish center.

“We’re preserving it, which is true to this particular parish,” Romero said. “We’re very big on preserving our history and where we come from, and this will allow us to do that and get the project done.”