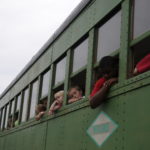 In this file photo from Sept. 13, 2008, riders peek out the window of a Midland Railway train in Baldwin City.

As it concludes its 30th anniversary, the nonprofit Midland Railway is no longer an all-volunteer organization.

The Baldwin City tourist railroad’s board of directors announced this month that it has hired A.J. Stevens as Midland’s first executive director. Stevens is also the first and only employee of the operation that depends on its volunteers to maintain its tracks and equipment, operate its locomotives, market rides and special events, and handle day-to-day business needs.

Allen Kinsley, Midland’s treasurer and general manager, said the hiring was a recognition that times have changed.

“We need someone who can apply for grants and work on the financial side of the organization,” he said. “With all of us being volunteers and many having full-time jobs, it was definitely a needed position.”

Stevens, who moved to Baldwin City three years ago and was appointed in July to the Baldwin City Council, comes to the job with a background in nonprofits, having served as president of the NAIA-Men’s Collegiate Lacrosse Association. After graduating from Thomas Edison State University in Trenton, N.J., Stevens held positions with Planet Fitness, the YMCA, Walt Disney World and several colleges.

Stevens will start at the railway as it looks to find the $345,000 needed to repair the damage from Aug. 22, when more than eight inches of rain swept away a quarter-mile of Midland’s tracks in northern Franklin County. Since that time, the railway’s tourist excursion rides have traveled only five miles south to Norwood Station, a Midland-owned campsite about halfway between Baldwin City and Ottawa. Fortunately for Midland, many of its fall special events, including the just concluded Santa Claus rides, have always been limited to that section, Kinsley said. The railway is now taking its annual winter break and won’t offer train rides until its Easter egg hunt rides in the spring.

The Kansas Belle Dinner Train, however, continues to operate on the Midland line throughout the winter and is much more dependent on the longer rides, Kinsley said. Four years ago, the dinner train relocated to Baldwin City from Nebraska. It uses the Midland tracks, and the railway has a contractual agreement to provide the locomotives that pull the dinner train’s reconditioned 1940s-era passenger and dining cars.

Stevens said his No. 1 priority would be to find the money to repair the tracks by the summer season.

“One way or another, that has to be our priority,” he said. “I don’t want to speak for the board of directors, but that is what I heard when I interviewed for this position.”

One avenue being explored was working with the Baldwin City Economic Development Corp. to secure grant money to purchase an easement from Midland for a biking and walking trail, Stevens said.

Kinsley said the benefit for Midland would be money to repair the damaged tracks, but it also would be a way for the railway to provide another amenity to the community. If such a trail opened, it would link Baldwin City and Douglas County to the Prairie Spirit Trail State Park, established on 51 miles of former railroad from Ottawa to Iola.

“There’s a tremendous amount of support and demand for that trail, so it’s not something we are opposed to,” he said.

Stevens said he would also look for grants to help repaint Midland’s passenger cars and to do other maintenance. He is also working with the Midland board to develop a strategic plan for the railway.

The flood put a damper on what was otherwise a good year, Kinsley said. The railway brought about 25,000 visitors to Baldwin City again this year. Of those, 5,100 bought tickets for the Santa train rides, an increase of 300 from 2016, he said. Midland brought back a steam engine for the first time in four years for a two-week event in August and sold out of the tickets that offered train enthusiasts a chance to work the levers of the engine, he said.