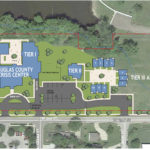 Conceptual plans for a behavioral health campus on West Second Street between Alabama and Maine streets were shared Wednesday, Dec. 13, 2017, with the Douglas County Commission. The plans show a 20,000-square-foot behavioral health crisis intervention center on the left, a transitional home in the center and 10 long-term housing units on the right.

There are many people who will offer up their couch to a friend who has no place to stay. But when the host finds the friend has been getting treatment for mental illness, the couch oftentimes becomes less available.

Schmitz is a supporter. He helped launch a multicounty crisis intervention center as part of his previous job in Iowa.

“You wouldn’t think there would be homeless people in rural Iowa,” he said. “But there were a lot of precariously housed people who were staying with parents, family members, group homes or friends who weren’t welcome back once they entered our facility. We were good at stabilizing people, but without somewhere to send them, they are going to cycle back through and you have done them no good.”

That’s why many mental health leaders now believe it is not enough to provide a place for people to receive treatment. You also must provide them a place to live, sometimes for months or even years. Douglas County leaders think they have a place in the Pinckney neighborhood — near Lawrence Memorial Hospital and the Bert Nash Mental Health Center — where they can build a mental health campus complete with housing.

But it is unclear whether Douglas County voters share the vision, and a price tag for the facility also hasn’t be determined.

A plan for a mental health campus was unveiled at Wednesday’s Douglas County Commission meeting. The site is north of the Bert Nash center along West Second Street and northeast of Lawrence Memorial Hospital. The campus would provide three tiers of supportive residential housing for people experiencing a mental health crisis or people who are recovering from one. The three levels include:

• An eight-room residential ward within the behavioral health crisis center. Bob Tryanski, county director of behavioral health projects, said the rooms were large enough to accommodate two beds if there was a need. He noted some patients respond to treatment better with a roommate.

• A two-story transitional coed group home with eight to 12 beds for those leaving the crisis center or others needing temporary supportive housing from a few weeks to up to nine months.

• Eight to 10 apartments available for long-term residents with persistent behavioral health issues. The apartments would provide housing with supported case management for residents until they are ready to move to independent housing.

Douglas County Commissioner Nancy Thellman said county staff, Bert Nash leaders, the Lawrence-Douglas County Housing Authority and other partnering agencies continued to work on details of a behavioral health plan, which includes the campus. The goal is to produce an affordable and sustainable plan for new buildings and services to put before voters in a bond referendum, she said.

“We won’t be working Christmas morning, but we are working very hard to get this completed,” she said. “We will have a plan in weeks.”

But currently, the county does not have an estimated price for the project and hasn’t set a date for a bond election. It also is unclear what reception voters will give the idea. Although no group has come out in opposition to increased mental health services, the faith-based group Justice Matters has expressed concerns of a different type. It wants any mental health bond issue to be presented to voters as a stand-alone item. County commissioners are considering combining the mental health bond issue with a bond issue to expand the Douglas County Jail at a price tag of about $44 million.

The eight-room residential ward would be part of a proposed 20,000-square-foot behavioral health crisis center, which would have designated space for individual and group counseling, Tryanski said. As the county has added housing options to the plan, it has shrunk the size of the proposed crisis center. The center is half the size of a previous conceptual plan Treanor Architects developed for the county in February 2016, which was estimated to cost $15 million.

The city of Lawrence Affordable Housing Advisory Board recommended Monday that a nearly $500,000 affordable housing grant be made available to Bert Nash for the transitional group home.

Schmitz said Bert Nash would provide supportive programming at the home. The programming would be designed to help tenants move to more independent environments.

The transitional home would probably have two people on staff during daytime hours, Schmitz said. Overnight staffing would be dependent on how many beds were available. A 12-bed home probably would require two staff members on duty, he said.

The County Commission agreed in October to work with the Lawrence-Douglas County Housing Authority to develop the long-term housing units for those with behavioral health concerns. Shannon Oury, executive director of the Housing Authority, explained the housing authority doesn’t have the legal means to construct housing. The arrangement Oury proposed and county commissioners agreed to pursue would have the county build the apartment complex. The housing authority would fully compensate the county for construction costs with $2 million saved from efficiently managing past U.S. Department of Housing and Urban Development grants, Oury said.

The housing authority needs to get HUD’s blessing to use the $2 million for the behavior health campus proposal, Oury said. She is confident she will secure HUD approval, based in part on successfully gaining HUD approval for similar projects in the past, she said.

“I know who to work with, and I have made contact with HUD,” she said. “They know this is coming. I don’t see any impediment. Our reserves can be used to acquire affordable housing units.”

Oury is less sure of when HUD would complete all the bureaucratic hurdles required to authorize use of the $2 million.

“We have a great relationship with Bert Nash,” she said. “We work with them all the time.”

The tenants could stay in the units until they no longer needed support, Oury said.

“In the programs we currently run, we have people who want to move on to independent living,” she said. “We help them get on a transfer list for Section 8 housing or public housing.”