A tour of KU’s new Earth, Energy and Environment Center 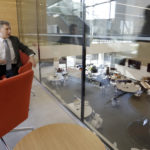 Robert Goldstein, a distinguished professor and special adviser for campus development at the University of Kansas, discusses the 162-seat Dixon Auditorium in Ritchie Hall in the EEEC, pictured at right and a floor below, that will be an engaged learning environment with students seated at large round tables with built-in computers for student collaboration during class. The center will open for classes in January.

The giant fossil casts displayed in the building’s atrium depict a doomed sea turtle fleeing from the literal jaws of death. In this case, those jaws belong to a 45-foot mosasaur skeleton.

But their home, at the brand-new Earth, Energy and Environment Center at the University of Kansas, is already bustling with life. Last week, as crews prepared the building for the upcoming semester, some faculty and staff (and a few curious undergraduates looking for a quiet study spot) began settling into the building, located at the corner of 15th Street and Naismith Drive.

The EEEC opens in January, and when it does, KU leaders hope the 141,000-square-foot complex will become a new beacon for visitors the world over.

Here’s a look at what the Journal-World saw during its tour Friday of KU’s Earth, Energy and Environment Center, starting with the larger of its two buildings.

“This part of the building is really focused on outreach and training,” says Bob Goldstein, who serves as a special adviser for campus development in the KU provost’s office.

“It’s all focused on bringing the outside world into the KU campus,” he says of the south building named for the late Don Slawson, of Wichita. The 1955 KU alumnus went on to found an oil and gas exploration firm soon after graduation that eventually become one of the most active drilling operations in the U.S., according to KU Endowment.

The businessman’s family (Slawson died in 2014) donated $16 million for the construction of KU’s EEEC, helping to bring together the two programs — KU’s department of geology and School of Engineering — that now call it home.

Goldstein’s favorite spot in Slawson: one such room on the building’s second floor, with windows facing KU’s Central District. From the corner perch, there’s an impressive view of Allen Fieldhouse, the soon-to-open Burge Union, Daisy Hill and every building and green space in between.

“When people come to campus, they’re going to be looking at this space, I think. And when they see a party here all lit up, they’re probably going to be a little envious,” says Goldstein, who helped contribute to the complex’s design.

Goldstein and collaborators at the Lawrence-based Gould Evans architecture firm wanted the EEEC to showcase Kansas’ geological resources, using as many natural materials as possible. The different shades and textures of the terra cotta panels along the building’s facade are designed to mimic the geological cross-section of Kansas.

The giant skeleton casts hanging in Slawson Hall’s atrium are also Kansas originals, their fossils having been discovered near Oakley and Quinter. The Cretaceous-period reptiles lived around 80 million years ago, back when Kansas was a vast inland sea.

The smaller of the EEEC’s two buildings, Ritchie Hall, is named for 1954 KU graduates Carol and Scott Ritchie, of Wichita, who donated $12 million toward the EEEC, according to KU Endowment. Scott Ritchie, who also worked in ranching and various business ventures, founded Ritchie Exploration Inc., an oil and gas exploration company, in 1963.

His namesake building is home to the bulk of the EEEC’s teaching and lab spaces, including a 162-seat “flipped” auditorium that Goldstein says represents the “cutting edge” of 21st-century learning.

Instead of a lecture hall with tiered seats facing a single professor, the EEEC’s Dixon Auditorium features round tables — each equipped with a computer monitor — where students are encouraged to work on projects in groups while the instructor circulates around the room, functioning more as a “coach” than a traditional professor, Goldstein says.

“It’s a really dynamic environment, to see this kind of teaching,” he says.

“We want to make sure that people know this about KU, so we’ve built this as an overlook to highlight it,” Goldstein says of the building’s open and airy design. “When campus tours come through, they’ll be able to walk through here, look down and see what an engaged learning environment looks like.”

Chemical and petroleum engineering courses, specifically those related to the oil and gas industry, will also be held at the EEEC.

Features more geared toward the general public include an immersive rock garden between the two buildings called the G-Hawk Educational Courtyard and a Slawson Hall virtual-reality cave. The space, which can fit around 30 people at a time, will allow visitors to experience 3D simulations of scenarios such as searching rock layers for oil and gas.

A dedication ceremony for the complex is slated for April 25.