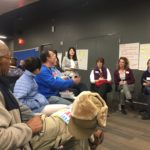 The Community Conversation took place nearly a year after the district hosted its first event, which came after a tumultuous semester dominated by talk of racial equity and drew hundreds to Lawrence High School’s cafeteria. Race and other overarching equity issues were once again the focus Thursday night, along with concerns ranging from bullying and mental health services to curriculum and limited classroom resources.

The event, facilitated by the University of Kansas Center for Community Health and Development, had school board members leading group discussions around these key issues. After about 30 minutes of discussion, each discussion group shared its main points with the room.

Lori Greenfield, a parent and teacher in the Lawrence district, was quick to join a group discussion on bullying, safety and mental health.

“I don’t think we do enough of that early intervention,” said Greenfield, who teaches second grade at Prairie Park Elementary and feels strongly that schools should be proactive in preventing bullying among their youngest students.

“On the flip side, I don’t think we do enough for the victims,” Greenfield said, adding that her own son felt uneasy returning to school after a recent bullying incident.

Vanessa Sanburn, who led the group with fellow school board member Jill Fincher, agreed that combating bullying should be prioritized. However, she said, limited state funding to address such concerns makes it a challenge.

And traditional disciplinary methods, such as expulsions and suspensions, haven’t proven effective in addressing the root problem, she said.

“I think as a district we’ve done a really good job with positive behavior supports, recognizing that we need to teach appropriate behavior and we need to highlight what people are allowed (to do), as opposed to constantly looking through a punitive lens and punishing students when they step out of line,” Sanburn said.

Continuing that plan and also moving toward restorative practices — “allowing students to mess up, to have alternative options,” Sanburn said — may be part of the district’s efforts in the future.

“We all agree that suspension and expulsion are bad ideas, but we also have to recognize that we need to have ways to hold people accountable and to allow people to repair when they do things that are harmful or wrong to other students,” she said.

Restorative justice programs, which have been successfully implemented in schools across the country and nearby in the Wichita school district, challenge students to resolve conflicts on their own through peer-mediated small groups.

School board member Jessica Beeson told community members Thursday night that she’d like to see these initiatives “woven in with” the district’s existing Beyond Diversity training and Ci3T system of student support.

“So, can we see how we’re moving that forward and who’s next and how do we get that to be district-wide?” Beeson said. “And what does that really look like? To have those conversations where students have an offense or have had something happen to them, and they get to be part of that conversation and that solution and that education piece.”

A report shared last month with the Lawrence school board revealed students of color continue to be disciplined with out-of-school suspensions at a higher rate than their white classmates. Though the district is making progress in reducing the number of out-of-school suspensions doled out, efforts to address the disproportionate suspension rate between students of color and their white peers haven’t been as successful.

Other recent reports show that students of color still trail their white counterparts in academic achievement and are underrepresented in gifted and advanced-placement courses.

The district is working to address this through several methods, including the introduction of culturally relevant teaching and professional training that breaks down misconceptions that some argue lead to students of color being punished at dramatically higher rates.

One participant at the event, KU biochemist Philip Gao, expressed concern that discussion around equity too often revolves around race. He said he hoped the district’s efforts to close achievement gaps, among other issues, would not “lower standards in the name of race or equality.”

In response, Beeson encouraged Gao to look up the term “institutionalized racism,” which she said the district has been actively combatting for years now through its equity work.

“So, we are tackling institutionalized racism in our district,” she said. “We aren’t actually tackling how to lower standards so that more kids can achieve our now-lower level that we have set.”

Beeson said professional training meant to level the playing field after generations of racial discrimination means the district’s bar is “still high, if not higher.”

Anna Stubblefield, the district’s interim superintendent, said notes from Thursday’s event would be compiled and put to use in organizing the next Community Conversation. Stubblefield said the next event would take place sometime in the spring semester.