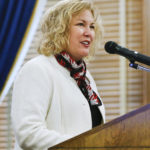 Gina Meier-Hummel addresses the media after being announced to serve as secretary of the Department for Children and Families during a press conference on Wednesday, Nov. 22, 2017, at the Kansas statehouse. (Chris Neal/The Capital-Journal)

TOPEKA ? The new leader at the Kansas Department for Children and Families is promising a thorough review of a state foster care system that’s faced months of scrutiny.

Secretary Gina Meier-Hummel, who was hired on Dec. 1 to lead the agency following the retirement of Phyllis Gilmore, met Tuesday with a legislative task force studying weaknesses in Kansas’ foster care system. The meeting touched on several issues, including how to better prevent deaths of children in contact with the agency, the Topeka Capital-Journal reported .

“I absolutely believe you have to reflect on what happened in the past to make sure that we don’t repeat things,” Meier-Hummel said. “The safety net is more than just one policy or program.”

The Department for Children and Families is responsible for programs tied to children, as well as welfare.

A scathing state audit of the foster care system in July 2016 concluded that Kansas was putting vulnerable children at risk by struggling to provide adequate oversight for contractors providing services. Then new questions arose in October about the number of missing children in Kansas’ foster care system.

Member of the legislative task force said the Department for Children and Families needs to improve how it tracks children who have left their assigned foster homes without permission. The department said Tuesday that it’s searching for 79 missing children, 65 of whom are categorized as runaways.

“One child away from place is one too many,” Meier-Hummel said. “I want you to be assured that we have staff right now, really great staff, attending to this need.”

“Peeling back the layers, if you will. What’s working, what’s not working,” Meier-Hummel said. “We will be an agency of compassion and experts, and we will be gracious.”

Lt. Gov. Jeff Colyer chose Meier-Hummel to replace Gilmore. Lawmakers had criticized her after discovering she wasn’t aware three sisters from Tonganoxie had run away from their foster care placement. The sisters were later found by law enforcement.