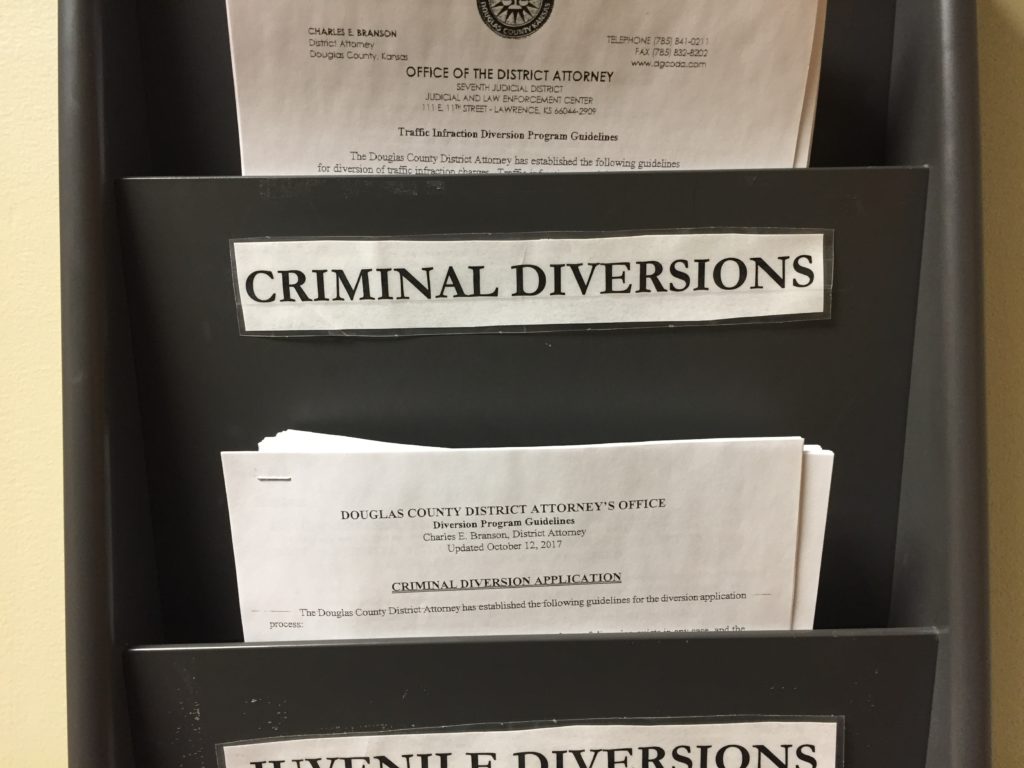 Criminal diversion applications and other forms hang in a rack on the wall inside the Douglas County District Attorney's Office.

If Douglas County granted diversions for accused felons at the national average rate, it could save $155,000 a year in incarceration costs, according to a newly released American Civil Liberties Union of Kansas report.

The report, released Wednesday, concludes that Kansas county prosecutors on average use diversion at an “abysmally low” rate of 5 percent of felony cases. Douglas County’s felony diversion rate is 5.6 percent, according to the report, while the national average — which the ACLU uses as a benchmark — is 9 percent.

“The underuse of diversion is crippling criminal justice in Kansas,” the ACLU said in a news release accompanying the report. “As the sole gatekeepers to diversion, elected county prosecutors determine how, when, and at what rate diversion is used in their respective counties. This prosecutorial discretion carries enormous — and unchecked — power, and, as our investigation revealed, too many Kansas prosecutors abuse that power to discourage, prohibit, refuse, and reject diversion in cases where it would be appropriate and beneficial to both the offender and the community.”

Douglas County District Attorney Charles Branson called that a “sweeping claim” that ignores the particulars of the issue.

“This is a political piece written in an intentionally misleading fashion to cast an inaccurate picture of prosecution in Kansas,” Branson said. 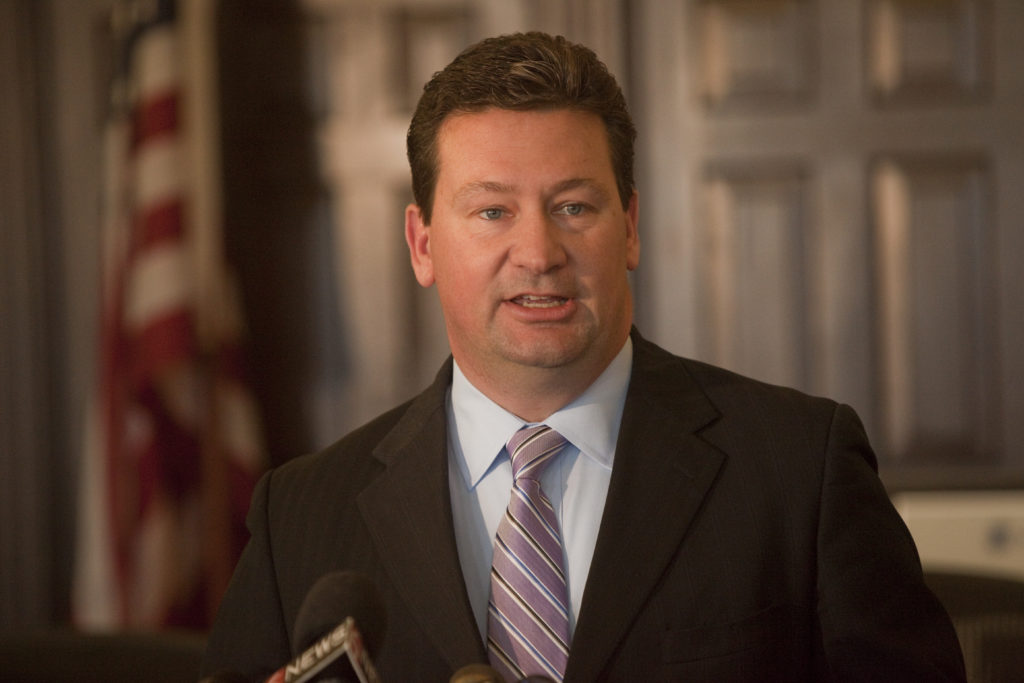 A diversion is a method of preventing a criminal conviction, Branson said.

For adults charged with crimes, being granted a diversion gives them an opportunity to complete a program — which may include things such as treatment programs, community service or restitution — in exchange for charges being dropped.

The ACLU report argues that diversion programs “prevent jails from becoming dangerously overcrowded, save millions in taxpayer spending every year, and connect Kansans, many with mental or behavioral health challenges, with the tools they need to avoid reoffending instead of strapping them with the lifelong consequences of a criminal record.”

However, Branson said more diversions would not necessarily reduce the prison population in the way the ACLU claims.

For example, he said, most felony criminal convictions here are controlled by state sentencing guidelines, and granting diversions for crimes where the sentence is probation would do nothing to reduce the jail population.

The cost to apply for diversion in Douglas County District Court is $100.

Branson noted that diversion programs require local funds and resources to run. To be successful, he said, the programs must involve supervision of defendants, community counseling and drug and alcohol treatment.

In Douglas County, felonies, drug offenses and even defendants with prior offenses are eligible for diversion, Branson said, but all are considered on a case-by-case basis.

In total — including felonies and misdemeanors — Douglas County files roughly 800 cases every year and diverts roughly a quarter of them, Branson said.

The ACLU calculated each of Kansas’ 105 counties’ felony diversion rates based on data provided by the counties.

The largest counties’ felony diversion rates were Johnson with 5.3 percent; Sedgwick with 1.7 percent; Shawnee with 8.1 percent; and Wyandotte with 3.6 percent, according to the ACLU’s report.

Midsized counties included Riley with 13.9 percent; Saline with less than 1 percent; and Reno with 0 percent, according to the report.

For counties with felony diversion rates lower than the national average of 9 percent, the ACLU calculated “potential annual cost savings” based on the county diverting enough additional people to reach the national rate, multiplied by the cost of sending one additional person to prison in Kansas, according to the report.

According to the report, 17 more felons being granted diversions would bring Douglas County’s 5.6 percent diversion rate up to the national average rate of 9 percent, saving $155,000 per year in incarceration costs.

Those figurative numbers are “out of thin air,” Branson said.

From 2014 to 2016, Douglas County denied defendants’ felony diversion applications for various reasons, according to a list the DA provided to the Journal-World. In rejecting applications, the county cited reasons including sex crimes, the severity level of the crime and defendants committing new crimes while applications were pending.

The ACLU’s report is titled “Choosing Incarceration: Kansas Prosecutors’ Refusal to Use Diversion and the Cost to Communities.” It’s part of the ACLU’s “Campaign for Smart Justice,” which it describes as an effort to reduce the U.S. jail population by 50 percent and to combat racial disparities in the criminal justice system.

The report emphasizes that counties’ top prosecutors are elected officials.

ACLU of Kansas executive director Micah Kubic denied that the report is political or misleading.

“The ACLU is a nonpartisan, nonpolitical organization, so we don’t get involved in politics. I think there are prosecutors from both parties who are probably unhappy about the report,” Kubic said. “We praise folks when they do a good job, and we critique when we think there’s room for improvement.”

Kubic said the ACLU’s report is based on information and numbers prosecutors themselves provided to the organization over the course of its investigation.

“The data is what the data is,” Kubic said. “I don’t know how that can be misleading.”

The Douglas County District Attorney’s Office plans a new diversion program specifically hoped to get and keep female, nonviolent, repeat offenders out of the county jail.

“We have a significant portion of that population that are really in a revolving-door pattern,” DA Charles Branson said. “It’s a place we think we can make a big difference.”

The goal is to prevent or at least delay those women’s return to jail, Branson said. The program will allow for quick release from jail to a “suite” of support services that will help the women with substance abuse, mental health, housing and employment. For defendants who complete the program, charges are dismissed.

The pilot program is hoped to launch early next year. Branson said he started planning the program in early 2017 and, in July, was awarded a Bureau of Justice Assistance technical assistance grant to help.

Several other county law enforcement and community services are participating in the program’s creation.

Branson said the size of the targeted population is roughly eight to 12 women, and that there are at least six individuals he envisions being good candidates.

“They’re familiar faces and names to us,” he said.

That’s another keystone of this new pilot program: Prior offenses are expected to be the rule, not the exception.

“There will be some convictions that will certainly preclude participation, such as prior violent felonies,” Branson said. “Prior minor offenses such as a drug offense or theft are going to be expected in our target population.” 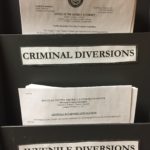 Criminal diversion applications and other forms hang in a rack on the wall inside the Douglas County District Attorney’s Office. 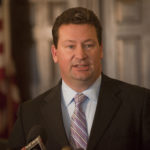