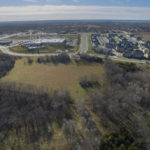 Undeveloped land owned by the City of Lawrence, at 5100 Overland Drive, is seen from the north, looking south, Tuesday, Dec. 5, 2017.

Lawrence school board leaders want to have a say in the city’s plan to build a $17 million police headquarters in northwest Lawrence.

The 16-acre site designated for the headquarters is across the street from Free State High School, and School Board President Shannon Kimball said there are already issues with the volume of vehicle and pedestrian traffic in that area. Moreover, Kimball said, the district needs more information from the city to determine whether other potential issues exist.

“Frankly, there may be other concerns that our building leaders have and our parents in that school community have that have not been even brought forward because of the lack of a process to involve the school district,” Kimball said.

The Lawrence City Commission voted at its meeting Tuesday to designate the property, 5100 Overland Drive, as the site for the police headquarters. The decision still has to go through additional review and approvals, but Kimball said she thinks the school district should have been involved in the conversation earlier.

“We’re a big land owner in that area, we’re a fellow governmental body in the community, and I want us to not be an afterthought,” Kimball said. “And having it come to the commission so quickly, I felt that the district was left out of the conversation, and I want to work on that.”

Police department staff told the commission that they informed the school district in the spring that the Overland Drive site was in the running for the headquarters. At that time, school district officials said the primary concern was an interest in the land for another school, according to Police Captain Anthony Brixius.

But Kimball said the information provided was limited. After city staff’s recommendation to use the Overland Drive site was added to the commission’s Tuesday meeting agenda, Kimball emailed the commission about her concerns, asking it to defer the decision until the school board could discuss the issue.

Addressing the commission at its meeting Tuesday, City Manager Tom Markus said he spoke to district officials following Kimball’s email. He said though there were some conversations about the Overland Drive site, there was a gap in communication on both sides and that the city can do better.

“I would say we both have work to do, but I can tell you there is no strain in the relationship nor is there an inability by either administration to get along and to make sure that those communications take place,” Markus said. “Like a lot of things, we can always do better.”

Following Kimball’s email, which was added to the commission’s agenda, Markus said he spoke to city planning staff about the process. Markus informed commissioners that the Overland Drive property will have to be rezoned and platted and that a site plan with a special use permit will have to be reviewed by the Planning Commission and approved by the City Commission. He said that process will take three to four months and necessitate notice to nearby property owners and public engagement.

The decision regarding the police headquarters location was not deferred, but commissioners confirmed that their designation of the site could be changed during the review process. Commissioner Matthew Herbert said he thought that was important out of respect for Kimball and because incoming City Commissioner Jennifer Ananda will be seated next month.

“So long as there’s that flexibility that we’ll have that process, I feel more comfortable going forward tonight with this discussion,” said Herbert, who is also a teacher in the district.

The commission picked the Overland Drive site over the other finalist site at VenturePark, an eastern Lawrence property closer to the Douglas County Jail. In total, city staff members reviewed more than a dozen locations. The city’s 2018 budget raised the property tax rate by 1.25 mills to pay for phase one of the police headquarters, and the size of the Overland Drive property would allow for it to expand in the future.

Kimball said that at this point, her plan is to ask for more information about the police headquarters plan from the city so the school board can ask questions and provide input.