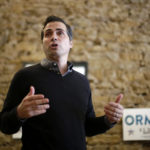 In this file photo from Nov. 1, 2014, Greg Orman talks to supporters during a senate campaign event in Topeka, Kan. (AP Photo/Charlie Riedel)

Orman, 49, of Olathe, ran a surprisingly close race for the U.S. Senate in 2014 against longtime incumbent Republican Pat Roberts, but he eventually lost that race, 53-43 percent.

Orman started out in business in 1992 by founding Environmental Lighting Concepts, a company that specialized in installing energy-efficient lighting systems in commercial and industrial settings. He later sold that company to Kansas City Power and Light in 1996.

More recently, he co-founded a private equity firm, Denali Partners, and he is a member of Exemplar Holdings, LLC, a company that owns the Lenexa-based boxing equipment manufacturer Combat Brands.

Orman’s campaign for the Senate made national news at the time because Republicans were poised to take control of the Senate, but polls were showing Roberts, who emerged from a tough GOP primary with less than 50 percent of the vote against Tea Party challenger Milton Wolf, as being vulnerable in a year that was marked by an anti-incumbent sentiment nationally.

The general election race appeared to become even more competitive when the Democratic candidate, Shawnee County District Attorney Chad Taylor, abruptly pulled out of the race, leaving a two-way contest between Roberts and Orman.

Republicans, fearing that Taylor’s withdrawal might cost Roberts the election, challenged the move in court, but the Kansas Supreme Court ruled that Taylor had complied with the law and was entitled to withdraw.

The national Republican Party, however, pulled out all the stops in an all-out effort to save Roberts, who ended up raising and spending more than $8 million in the campaign, compared with $5.7 million for Orman.

Orman joins an already crowded field in the governor’s race. On the Republican side, Lt. Gov. Jeff Colyer, who is expected to become governor pending Gov. Sam Brownback’s confirmation to a diplomatic post, is running for a full four-year term of his own. But he faces competition for the GOP nomination from Secretary of State Kris Kobach, Insurance Commissioner Ken Selzer, and former legislators Jim Barnett, Mark Hutton and Ed O’Malley, among others.