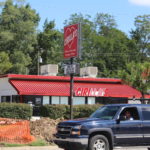 Though its location is not in line with city code, a sex shop along one of Lawrence’s main thoroughfares is likely to stay put.

Cirilla’s, 1206 23rd St., sells sex toys, lingerie, bondage devices and other sexually oriented products. Under state law, the City Commission could adopt regulations to close the shop, but city staff isn’t recommending that at this time.

“I don’t think leaving it creates a harm,” Director of Planning Scott McCullough said. “And uses sort of have a natural lifecycle, and so at some point, if that use goes away, a new use will take its place.”

But that is a bit different from what city officials used to think. In 2005, the city forced a Lawrence businessman to close his sexual novelty store on south Massachusetts Street. The city forced the change because the shop wasn’t located along a state highway. Recently, 23rd Street lost its designation as a state highway, which created questions about whether Cirilla’s would be forced to close.

The question dates back to 2000 when the city adopted new regulations that required sexually oriented businesses to move, within five years, to a location along a state highway. Those requirements led to the closure in 2005 of the sexual novelty store Naughty But Nice, then located on Massachusetts Street. At that time, Cirilla’s — then named Priscilla’s — wasn’t affected because of its location on 23rd Street, which until the recent completion of the South Lawrence Trafficway was designated as Kansas Highway 10.

Similar to Naughty But Nice, Cirilla’s violates other conditions of city code regulating sexually oriented businesses, including requirements that sex shops be at least 800 feet from residential areas. Those regulations were adopted in 2000, meaning that both shops, which opened prior to that, would have been grandfathered in as legal nonconforming uses. The difference in fate for the two shops was the provision that required sex shops to locate on state highways.

As a result, the sexually oriented business use at Cirilla’s location continues to be grandfathered as a legal nonconforming use, McCullough said.

“It was established under legal framework and the mere re-designation of the highway status makes it nonconforming, but it’s allowed to exist,” McCullough said. He added that under that grandfathered use, the sexually oriented business use cannot change and would not persist if the building was damaged past 60 percent of its value.

McCullough, though, acknowledged state law would allow the city to remove the grandfathered designation from the business. The City Commission would have to adopt another five-year elimination provision to make Cirilla’s move to a city street designated a state highway, which include Iowa Street and segments of Sixth Street. But McCullough said there isn’t a reason to do that at this time because staff doesn’t think 23rd Street’s loss of its state highway designation amounts to a substantial change.

“Staff doesn’t think so, because the only thing that has changed is the designation of the street,” McCullough said. “When you think about it in those terms, all of the context of it remains and hasn’t changed much.”

When reached by phone Monday by the Journal-World, a manager at Cirilla’s said she had no comment on the situation.