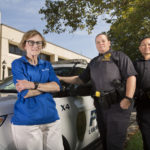 Since the early part of the summer, Susan Hadl, who had a 32-year career with the Lawrence Police Department before her retirement, began doing ride-alongs as a representative of Bert Nash and as part of a co-response team with police officers Sara Mills and Amber Rhoden, to help in calls where a person involved might have mental health concerns. The three are pictured on Friday, Aug. 25, 2017 outside the Law Enforcement Center.

It’s as if Susan Hadl has prepared for her new position her entire professional life.

Hadl started June 5 as the mental health specialist on the newly created co-response team. The job has her working out of the Judicial and Law Enforcement Center and responding with a Lawrence police officer on incidents or referrals involving individuals with mental health concerns. It’s a comfortable career move for Hadl, who retired in 2011 after a 32-year career with the police department. During those three decades, she rose from a rookie patrol officer to a sergeant.

But even as a newly hired officer, Hadl was preparing academically for a post-law enforcement career.

“I got my master’s in social work in 1982 and 1983,” she said. “I just maintained my license through the years, knowing I’d be able to retire and pick up a social work position.”

She could not have conceived the need for a co-response team when she started in law enforcement.

“I saw it develop,” she said. “I remember when I was on patrol, there were two specific individuals in Lawrence who seemed to be homeless and suffering from mental health issues, and that was it.”

Times have changed, and the mental health response team is an initiative meant to provide trained support to the officer on the street, Hadl said.

“Our immediate goal is to de-escalate a crisis situation,” she said. “This is really, truly the integration of both my backgrounds.”

Hadl said she and one of two Lawrence police officers assigned to the team, Amber Rhoden or Sara Mills, take charge of a scene when called to crisis situations. They attempt to talk the individual in crisis into voluntarily entering treatment.

That is not always successful because sometimes a person either refuses to get treatment or is not in a lucid state, Hadl said. When people in crisis won’t agree to treatment and are deemed a danger to themselves or others, the team commits them to treatment involuntarily, she said.

The team does more than just wait for crisis calls, Hadl said. She and Rhoden or Mills also drop in on those with whom the team has had past contact, visit people who may have sought treatment in the Lawrence Memorial Hospital emergency room the previous night, or initiate contact with those referred to the team by family members, police officers or service agencies.

The purpose of the visits is to check on the well-being of the people and help them make positive choices, Hadl said.

“We come to know them,” she said. “We do follow-up to make sure they are still doing well and still engaged with services.”

Sgt. Ryan Halsted, who oversees the officers assigned to the co-response team, said the program was about solving problems for those with mental health issues.

“It’s about getting people the services they need and trying to catch them before they go too far,” he said. “We’re looking at those high-volume consumers. They may be going to the emergency room but not getting the follow-up they need. If we can bridge that gap and give them that warm handoff, we hope to get them connected to services before they make that next visit to the emergency room or find themselves in jail.”

The program builds on the mental health Crisis Intervention Team training the department has provided all its police officers, Halsted said. CIT trains police officers and other first responders on how to identify symptoms of mental issues and how to prevent situations from escalating. Police department co-responder team member Rhoden was a driving force in the effort to provide the department’s CIT training, Halsted said.

A police department bond with Bert Nash is built into the co-response program. Although Hadl works out of Lawrence Police Department offices, she is a Bert Nash employee and reports to Nicole Rials, Bert Nash supervisor of crisis services. In an arrangement that is common with response teams, the city contracted Bert Nash as the local mental health center to hire and supervise the mental health specialist on the team, she said.

The response team’s organizational and funding structure was developed after visits to and reviews of operating teams in other communities, including Johnson County, Halsted and Rials said.

Robert Sullivan, Johnson County criminal justice coordinator, said multiple response teams have sprung up in the county since the city of Olathe introduced the first grant-funded team in 2011. Olathe funded the team on its own in 2012, and Olathe Medical Center will add another team in that city this year. Response teams now operate in Overland Park, Lenexa, Shawnee and through a partnership of 10 northeast county cities, he said. In addition, Johnson County Med-Act, which provides emergency medical response countywide, now has a response team, too, he said.

The success of the program in Overland Park was evaluated in a report Alex Holsinger, of the University of Missouri–Kansas City’s Department of Criminal Justice and Criminology, completed for the city. The report looks at the outcomes of the Overland Park Police Department’s calls involving individuals with mental health issues for 2012 and 2013, which was the first year for the city’s response team. Holsinger found that incidents identified as mental health calls increased from 513 in 2012 to 773 in 2013.

One limitation of the new Lawrence response team is that it is only available the hours that Hadl works Monday through Friday, Hadl said. The program could be expanded, but only if data like that in the Overland Park study shows there is a need, Halsted said.

“We will have to look at the numbers to see if there is a need,” he said. “Obviously, the county is doing a lot with behavioral health. We don’t want to take a shotgun approach. If expansion is needed, we have to be able to explain why we do that.”