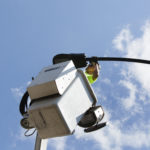 Max Wainscott, with the city's public works department, fixes an LED light in the 600 block of Massachusetts Street on Tuesday, July 19, 2016.

As light fixtures throughout the city shed their old bulbs for new LED lights, an unseen element of the new glow has some residents concerned.

Some research indicates the color of LED lights the city will be installing, white with unseen blue light, could be unhealthy. Last summer, the American Medical Association advised against the installation of “blue-rich LED streetlights,” and some residents want the city to follow that recommendation.

“There are towns in America where they are tearing out the LED lights they put in to put in lower-color temperature ones,” said Adrian L. Melott, a professor in the department of physics and astronomy at the University of Kansas. “We don’t want to get ourselves into that fix. It’s easier to switch now than to have to tear them out later.”

The city has allocated about $4.4 million for the new LED lighting in various facilities and along some roadways. The LED lights are more energy efficient and long-lasting, and are projected to save the city about $225,000 annually, according to city projections.

While the AMA report notes the cost and energy benefits of LEDs, it warns that some types of LEDs are harmful when used for nighttime lighting. Lights can be a range of color temperatures, and the AMA recommends that communities minimize blue-rich street lights and generally use LEDs no brighter than 3,000 kelvins. The report states that blue-rich light creates glare and suppresses the nighttime release of melatonin, a hormone associated with sleep quality.

“Honestly, we didn’t know to ask for less than 3,000 (K) because it wasn’t an issue,” Horn said. “While we were planning this project, this first piece of research was just coming out and our lighting engineers were telling us this is the first organization to make a statement, but there’s going to be more research done.”

All the LEDs the city is installing, including some outdoor lighting, range between 3,500 and 4,500 K, Horn said. Although Westar Energy operates the vast majority of Lawrence streetlights, the city’s installation includes some city-owned street, pedestrian and parking lot lights, as well as outdoor lighting in parks and sport fields. Horn said bright light is necessary in those areas to ensure the safety of people using them. Lights in the approximately 40 city-owned buildings will also be replaced.

The LED lighting installation is one of the largest elements of the city’s $11.3 million project to improve the energy efficiency of all the city’s facilities. Ultimately, the city followed the recommendation of the Lawrence-based general contractors for the project, 360 Energy Engineers.

“That was in the middle to the end of our design process,” said Nick Pedersen, electrical engineer with 360. “So, it didn’t make sense for us to have a knee-jerk reaction and change the color of lights that we were planning to install based on this one release from the AMA, especially since it’s been widely panned by the lighting industry.”

Pedersen said the contractors are already halfway through installing the city’s new LEDs, and though it would be possible to change plans, doing so would be impractical and not the best decision.

“It’s never too late to change course, but there is cost and complexity associated with that,” Pedersen said. “We haven’t finished the installation yet; we could send back the lights we already bought for a charge and buy yellower lights if we needed to, but we don’t believe that that’s the right thing to do in this case.”

Pedersen pointed out that the AMA recommendation doesn’t get into specifics of how much exposure is harmful.

The AMA recommendation is also specific to streetlights, most of which are not owned or operated by the city. The city owns about 20 percent of the outdoor lighting in Lawrence, with the rest owned and operated by Westar. Including traffic lights, Westar owns 3,500 lights while the city owns about 800 street, pedestrian or parking lot lights, according to Bill Musick of the city’s public works department.

For its part, Westar is also replacing old bulbs with LEDs. About half of the streetlights in town have been changed to LED, according to Westar operations director Vince Avila. Avila said, in an email, that Westar elected to install 4,000 K LEDs because that color temperature mimics moonlight and allows people to see true colors.

Not everyone agrees with the AMA recommendation. The Department of Energy issued a response stating that effects of exposure to blue light at night also apply to light from television, phone and computer screens and depend on the amount of light and duration of exposure.

But some think the AMA’s recommendation needs to be taken seriously. Mark Roeyer, a retired lighting installer who mostly worked on museum installations, said he would follow the AMA recommendation. He said such recommendations aren’t made casually.

“I support the installation of LEDs, it’s just getting the right ones,” Roeyer said. “The best thing we can do is look at the AMA’s report and go with that.”

The AMA recommendation also notes that blue-rich light can negatively affect nocturnal animals and create glare and sky glow. The recommendation states that lights should be shielded in such a way that the light is directed downward. Horn said that has been a concern for many people and that the city will be properly shielding all fixtures.

“If they reflect up toward the sky or out toward your eyes from the fixture then they feel harsher and they can create sky glow or glare,” Horn said. “The best thing you can do to mitigate that on any light fixture, no matter what the technology is, is with proper shielding to make sure that the light is directional.”

Horn said the city will be scheduling a community meeting in coming weeks to further discuss the LED light installation.