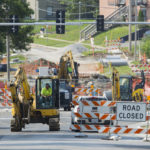 Waterline replacement construction at the intersection of 23rd Street and Ousdahl Road continues on Thursday, Aug. 10, 2017. The city recently found that 13 miles of piping installed in the 90s may not have been installed correctly, potentially adding to needed replacements in coming years.

For more than two weeks, people living in the 2000 block of Louisiana Street saw firsthand what a water main break means. That included workers having to tear through lawns and sidewalks to replace the leaking pipe, and a week when residents had to boil their drinking water.

Before that, a water main break on Fourth Street required several days of repair and left 200 customers temporarily without water. And there were others.

In a three-week period, 22 water main breaks occurred throughout the city, costing a total of about $200,000 in repairs and replacements, according to Director of Utilities Dave Wagner.

“It was pretty extensive relative to what we usually do because we were running multiple crews,” Wagner said. “Basically running a 24-hour operation on line repair for a week, and we don’t normally have to do that.”

When the pipe from the Louisiana Street neighborhood, which is near Lawrence High School, came out of the ground, it was in much worse shape than expected. The pipe was rusted and brittle, and Wagner said it was so fragile that one tap of a ballpin hammer was enough to puncture it.

The pipe, though, is only about 25 years old and was projected to last for 100 years. Wagner said its unexpectedly poor condition was due to how it was installed, and there are another 13 miles of piping that were installed the same way. Wagner said they will likely have to adjust rate models and replacement plans based on what they learn from investigations into the condition of that piping.

“Right now, it’s giving indication that we’ve got to adjust our life expectancy,” Wagner said. “That 13 miles of pipe, it’s probably not going to last that long.”

If the piping continues to fail sooner than expected, those adjustments will create unexpected costs at a time when water infrastructure costs and water bills are already on the rise. The situation could make balancing regular maintenance, emergency repairs and costs to residents more difficult.

Wagner said the pipe installations were done in the 1990s without the wrapping or other protection needed to account for the soil conditions.

Wagner said he is not sure who decided to not wrap or protect the pipe or what the rationale was.

“I don’t think we have any recourse in that,” Wagner said. “Those were decisions that were made in the ’90s, to do that installation practice. With every industry you get on a learning curve and change things as you start to respond to failures.”

Commissioner Matthew Herbert said the city’s response to the situation is two-fold. For one, he said he thinks the city has to take care of its infrastructure needs. In addition, he said there is a lesson to be learned.

“This is a classic example of why you have to do things right the first time, and sometimes doing them right is more expensive than doing them the quick, cheap way,” Herbert said. “Had we wrapped those pipes in the ’90s, we wouldn’t have a problem today.”

Commissioner Lisa Larsen also said the city is paying the price for not making the best decision for the long term.

“Hopefully, it will be a lesson learned and we’ll take a different approach,” Larsen said.

Since installing that piping in the 1990s, the city knows more about the characteristics of the soil in the area. Wagner said the city tested the soil characteristics around 2010 and they were found to be “aggressive.” He said now the standard requirement is to wrap ductile pipe or install what is known as cathodic protection.

Wagner said the city needs more data about the 13 miles of unwrapped pipeline to determine if repairs or adding protections could help at this point. He said some of the piping is thicker and therefore may not be as fragile as the lines that required complete replacements.

Larsen said she thinks the city’s engineers need to sit down and determine the most effective strategy for the unwrapped segments, and whether it is best to pre-emptively replace or repair them.

“What’s the best decision from a cost standpoint as well as a long-term maintenance standpoint?” Larsen said.

The City Commission unanimously approved an 8 percent increase for water and sewer rates for next year. The average resident who uses 4,000 gallons monthly will pay about $72 per month for water, sewer and stormwater in 2018 (not including charges for trash and recycling). Compared with rates in 2013, average water costs are up $22 per month, or by about 30 percent.

Wagner said addressing the unplanned water main failures may mean deferring or scaling down planned projects or going back to the commission in the future to increase water rates beyond current rate models.

“But some of that’s just a matter of looking through the numbers, refining the data and getting it to be right-sized for what’s reasonable in running the utility,” Wagner said.

Herbert pointed out that Lawrence is toward the middle of the pack when comparing its utility rates to similar communities, but that the city needs to be very conscious of how rate increases affect residents with low or fixed incomes. Still, Herbert said the city must keep infrastructure needs in mind and plan incremental increases.

“Ultimately, if you don’t keep up with it, once you get behind it’s hard to ever catch up,” Herbert said. “And so we’re going to have incremental increases, it’s going to be something that’s going to happen. But I think the bigger danger is if we try to play the political game of not having increases for a prolonged period of time to make us look better politically and then putting ourselves so far behind that we have to have some sort of huge jump.”

The city does currently have reduced rates for elderly residents who also are low-income, but parameters for that program are narrow. To be eligible, residents must be over age 60 and make less than $13,266 per year for a single person and less than $17,864 for the head of a family. Herbert said he is interested in expanding the program so more people are eligible.

“Programs like that are going to be really important,” Herbert said. “And I’ve actually begun conversations with (Finance Director) Bryan Kidney about how we can expand that program a little further.”

In addition to infrastructure repair, city staff have said the utility rate increases beginning next year will go toward compliance with stricter water quality regulations and the city’s new wastewater treatment plant. The Wakarusa Wastewater Treatment Plant will open next year and will give the city greater capacity to handle growth and meet new treatment regulations.

The city has a regular schedule for replacing water mains, such as a project to replace the water main along a portion of 23rd Street that is currently underway. Another $2.6 million of water main replacements are budgeted for next year.

Dealing with breaks is also a regular part of business for the city. In 2016, there were 141 breaks and 140 the year before, according to Deputy Director of Utilities Mike Lawless. Through July, Lawless said there have been 89 breaks.

Wagner said the city typically has 130-180 water main breaks per year, but the hope is to get that trending downward.

Herbert said another element of the funding conversation is the citywide 0.55 percent sales tax, which is up for renewal in November. If approved, the tax would fund infrastructure, public transit and affordable housing, and residents can vote on each of the three elements individually.

“At the risk of this sounding like a sales pitch, I suppose, I think this situation really highlights the importance of that infrastructure portion of the sales tax that’s coming up in November,” Herbert said. “We have some real serious infrastructure needs that, as of this summer, appear to be a whole lot more serious than we even thought.”

The city’s current budget assumes renewal of the sales tax. From 2019-2022, the city’s capital improvement plan currently calls for another $16 million of water main replacements or relocations. Final spending decisions for each year will be each preceding summer as part of the city’s budget process.