Missing payments may not be as extensive as feared; Riverfront Plaza payments still in dispute 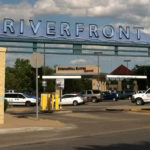 City officials say missing city invoices and payments may not be as extensive as initially feared when the city began an audit of its billing procedures.

In June, the city identified a major billing discrepancy with the Riverfront Plaza’s ground lease, but Finance Director Bryan Kidney said he is not expecting to find additional significant sums unbilled or unpaid. However, Kidney emphasized a final determination will not be known until the audit is complete.

“As of yet, I haven’t seen anything come out that makes me overly concerned,” Kidney said. “I think our departmental records were in better shape than what we initially were concerned with.”

City Manager Tom Markus ordered the independent audit of the city’s billing procedures two months ago after the owners of the Riverfront Plaza asked the city for a billing summary and city staff found that invoices amounting to thousands of dollars annually had not been sent since 2011.

An initial assessment done as part of the audit indicated that poor record keeping, insufficient employee training and a lack of oversight caused those and other invoices to not be sent. In addition to Riverfront’s lease, the audit’s initial assessment found billing discrepancies with 10 other leases, and auditors told the City Commission in June they expected to find more.

Kidney said that so far most of those discrepancies are actually record-keeping issues. Kidney said the city has 149 billing contracts, and though not all contracts or payments were being properly recorded in the city’s new billing system, he said most payments have actually been received.

“We’ve gone back on those and have located, I believe in most cases, that the billing and the receipts were taking place,” Kidney said.

Simons said the amount of the Riverfront’s ground lease — the city owns the land the building sits on — had been renegotiated and reduced from $36,000 to $5,000 per year under former City Manager David Corliss. The Riverfront Plaza once housed the now defunct Riverfront Outlet Mall, and Simons said the reduction was requested due to economic hardship.

Representatives for Riverfront and the city have been discussing a resolution, and Simons said several offers have been made. Simons said he is now offering to pay a total of $200,000, or the equivalent of the higher rate over the five-year statute of limitations.

“The numbers that we’re agreeing to are way more than we think was necessary because we think we renegotiated the deal,” Simons said.

He said he hasn’t heard back regarding the latest offer, but is hopeful.

“I would hope that we could end it there, but we are in friendly discussions trying to get this thing solved because we do have bigger things to do in downtown Lawrence,” Simons said.

Kidney said he didn’t know the status of the Riverfront issue, and the city attorney’s office didn’t immediately respond to an inquiry from the Journal-World as to whether it will accept the Riverfront’s latest offer.

As the outside audit of the city’s billing continues, Kidney said auditors will be verifying the accuracy and payment history of all of the city’s 149 contracts. He said the hope is to have the audit complete in October.