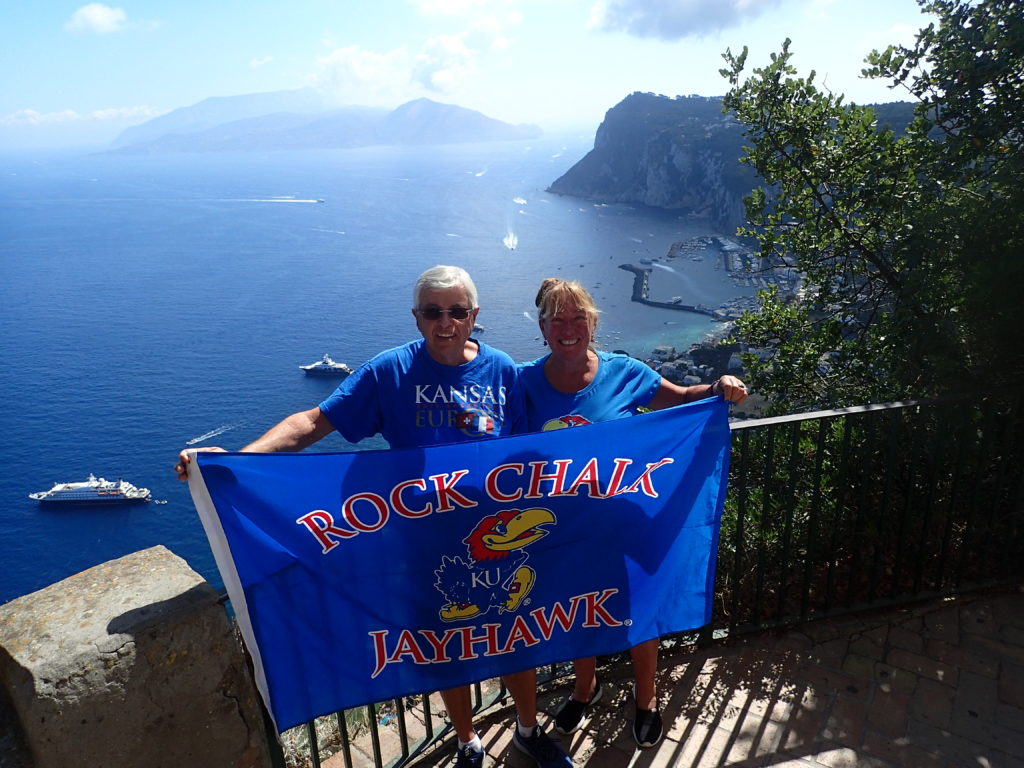 Russ and Linda Sims are shown with their KU flag high atop a hill at Anacapri at the Isle of Capri, where the couple vacationed before joining the Jayhawks in Rome.

Milan — Whether on TV, in person or even via social media somewhere, you’ve probably seen the flag whether you realize it or not.

Fixtures at nearly all Kansas basketball games near and far — and many other KU events, as well — Russ and Linda Sims have sort of made it their signature move to take a bright blue flag that reads “Rock Chalk Jayhawk” to all of the historic and scenic places they’ve traveled to both capture the moment and represent the Jayhawks.

These are not your run-of-the-mill, see-it-and-move-on type of tourists. And they’re not those types of basketball fans, either.

If Russ is told something about a particular attraction by a tour guide, odds are he’s going to remember it. Same goes for their beloved Jayhawks, with the couple remembering dates, scores, names and games with great detail from all of their travels and all of their trips to KU basketball games. 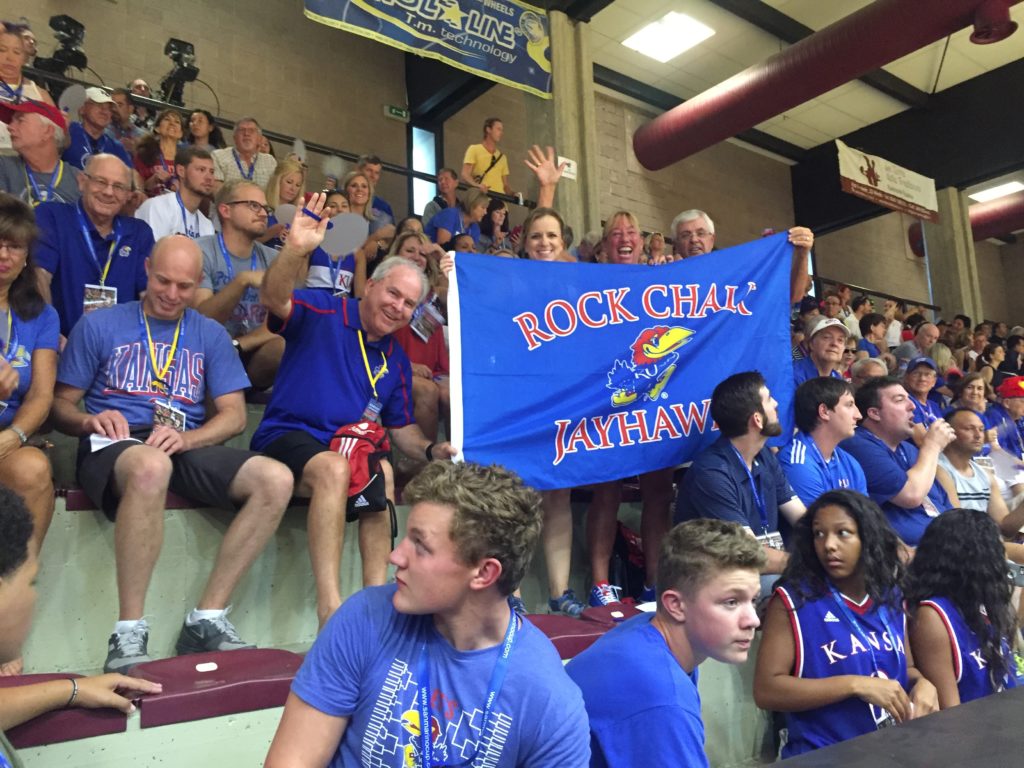 Russ and Linda Sims, surrounded by other Kansas supporters, bring out their Rock Chalk Jayhawk flag before Game 2 of KU’s tour of Italy on Thursday night, Aug. 3, 2017.

“She is actually known as Jayhawk Linda,” joked Russ, a native Californian who attended college at an NAIA school in Oklahoma. “I’m just a lucky guy that married well and married into KU.”

Married 12 years ago, their love of following the Jayhawks wherever they could was present from the beginning. During that time, Russ and Linda have taken their beloved flag to a number of places from foreign countries and tropical locations to NCAA Tournament sites and hotel lobbies.

The whole idea started when a group of KU engineering students traveled abroad and Linda hopped on Amazon.com after they left and shipped them a flag for their trip. The pictures of those students holding the flag in fun and exciting places sparked something and Russ and Linda have been following suit ever since. Their first official trip with the Rock Chalk banner came when they trekked it to the top of Mount Pilatus in Switzerland in 2012.

Added Linda: “The one we have here may be the backup. The other one might’ve kind of worn out.”

Although the flag phenomenon is relatively new, their love of traveling the world predated even that. Regularly overseas on business trips, Linda often brought Russ along and likes to joke about what he did during the day when she was hard at work. 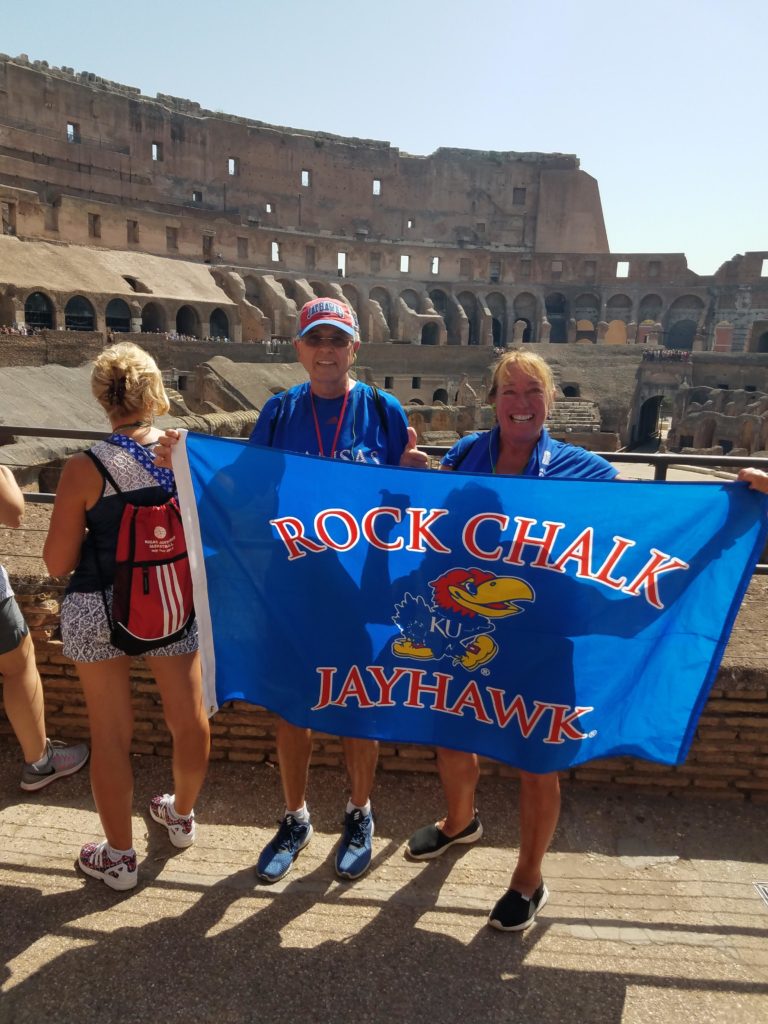 Russ and Linda Sims spread their Rock Chalk flag from inside the Roman Colosseum, one of many distant places the couple have followed the Jayhawks during the past 12 years.

“I would go to work and I would call him and ask him, ‘How are you doing, are you at the Grand Plaza hanging out with your girlfriend Stella, Stella Artois?'” Linda said, joking about the name of the popular Belgian beer. “I’m not as much of a historian as he is, but I am in more of a social way. I love doing things like this, seeing the sites but also interacting with other folks and KU fans. We’ve made a bunch of new friends through the KU trips who we might not have otherwise met or known if not for something like this.”

The “this” that Linda references this particular time around is an eight-day, two-city tour of Italy, where the Jayhawks have played three exhibition games against local teams and will cap the trip with one more at noon today.

In Italy for the second time in their traveling lives, Russ and Linda are in Milan for the first time. That made this trip a little more special and their trip to the church of Santa Maria delle Grazie on Friday night to see Leonardo da Vinci’s “Last Supper” was as moving an experience as they’ve had.

“It’s definitely in the top 10,” Russ said. “I didn’t think it would be, but after doing it, it’s in the top 10 because of the history around it and the way it happened and the stories about da Vinci.”

As has been the case so many places, Russ, who calls himself “kind of a history buff,” retained the details like he lived them himself.

“‘The Last Supper’ was incredibly interesting on many fronts,” he said. “Milan got bombed in World War II. And that building got bombed. The two side walls got knocked in, the ceiling got knocked in, but the two end walls with the paintings were undamaged. It was a miracle. There’s no other way you can describe it.”

Before meeting up with the KU contingent in Rome, the couple traveled to the Isle of Capri and Pompei, two more sites that fed Russ’ historical hunger. 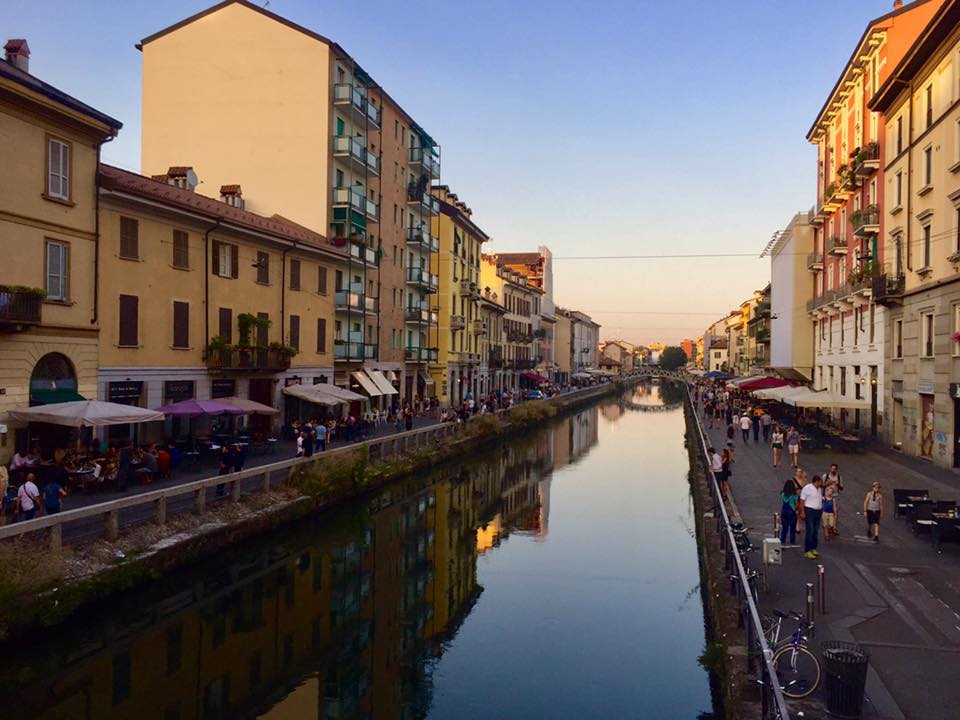 This shot, in the heart of Milano Navigli, shows the architecture, bright colors and quaint feel of Milan, where the Jayhawks spent the second part of their Italian tour in August 2017.

“The ruins at Pompei were the most fantastic piece of history I’ve ever seen,” Russ said. “Pompeii existed from like 475 B.C. to 79 A.D. when it got covered with 24 feet of volcanic ash. No lava. Just ash. It was not uncovered until 1750 and everything was perfectly preserved like it was yesterday. It was unbelievable.”

So, too, has been the support on KU’s trip to Italy. Russ and Linda are just two of the 100 fans and 80 players, coaches, friends and family members associated with the team who made the trip, making up the largest travel party the organizing body — Basketball Travelers Inc. — has ever hosted. BTI actually had to bring in extra help from other parts of the world to handle the Jayhawk invasion.

According to Linda, that number includes just 12 to 15 people who were on the last trip overseas when KU played in France and Switzerland in 2012.

“I’ve been at a lot of different universities and what I saw the first night of this trip, with all of those fans and donors and our coaches and the players enjoying time together is something that others strive to have,” KU athletic director Sheahon Zenger said. “Other places don’t do it like this. And Russ and Linda exemplify that. They show up everywhere and it’s gotten to the point where you pretty much expect to see them. It’s just what they do. And we’re so fortunate to have their support along with the support of so many other great people who are on this trip and others.”

Said Russ: “You know how KU people are. There’s so much camaraderie. It’s like a freakin’ religion. It really is … As long as we can do these trips, we’re doing it. We’re already looking forward to the next one.”