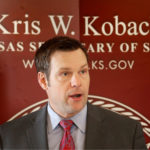 The 10th Circuit Court of Appeals on Wednesday denied the Kansas Republican’s request for an emergency stay of his deposition by the American Civil Liberties Union.

Judges in Kansas found Kobach misled the court about the contents of a document he took into a November meeting with then-President-elect Donald Trump and a separate draft amendment to the National Voter Registration Act.

The lower court fined Kobach $1,000 and ordered him to testify on Thursday.