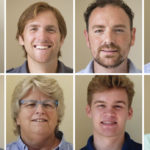 In Tuesday’s primary election for the Lawrence City Commission, incumbents Lisa Larsen and Matthew Herbert easily earned the right to move on to the November general election.

Larsen established her spot on the top of field of eight candidates when advance voting totals were released shortly after polls closed at 7 p.m. Tuesday. Her lead in the contest was part of an evening of consistency, as the order of all eight candidates remained unchanged from the release of early voting totals to the final unofficial count. She finished with 3,671 votes.

Ken Easthouse, with 759 votes, and Christian Lyche, with 277 votes, were eliminated from the race.

Larsen said she was humbled by her strong showing and said her focus on the commission and in the coming campaign would continue to be on economic development, affordable housing and implementing the commission’s strategic plan.

“I want to make sure that we are implementing our strategic plan and that we’re looking at our pool of assets and doing evaluation,” she said.

Herbert said Tuesday’s results meant more to him than those from his first campaign four years ago.

“I’ve always kind of joked that anybody can get invited to a party, but getting asked back is the real challenge,” he said. “It’s been one of the greatest honors of my life to get to serve the city, and I would be absolutely thrilled to have that opportunity again.”

Stumblingbear and Ananda hung close to Herbert and separated from the remaining four candidates in the race. Stumblingbear said he was humbled by his finish, which he attributed to his and his family’s hard work and that of his team of 10 volunteers.

“We’ve contacted almost 6,000 voters, and we are just getting started,” he said. “I’m having the time of my life.”

Ananda said she was encouraged by her finish in a race in which some of her competitors spent two to eight times as much as she did.

“I am confident that my campaign will continue to gain momentum and support moving forward,” she said.

Anderson said he didn’t get the results he was hoping for Tuesday, but that history has shown it is possible to get elected to the City Commission from his primary position.

“I’m looking forward to the challenge of moving up to one of the top three spots,” he said.

Chahine said he would run a much more aggressive general election campaign. He vowed to knock on the doors of 5,000 voters and start seeking donations.

“I should have done a lot more,” he said. “I’m going to have to work very hard. There are quite good candidates out there.”

The three candidates moving on in the other primary contested in Douglas County, for Position 6 on the Perry-Lecompton school board, were Nick Fergus, 43 votes; Stephanie Confer, 31 votes; and Brad Guess, 27 votes. Debra Walburn, with 8 votes, failed to qualify for the November general election.

Douglas County Clerk Jamie Shew said the 10.14 percent voter turnout was disappointing. He said 5,944 of 58,596 eligible voters cast ballots Tuesday. The total was about 100 more than the number who voted in a March 2013 city/school board primary conducted during a heavy snowstorm, he said.

Tuesday was the first city/school board primary to be scheduled for August since the Kansas Legislature changed the dates of the elections, which have historically been conducted in the spring. Shew took a hopeful approach, saying Tuesday’s turnout was something future city/school board elections could build on.

The county clerk also was hopeful the three-month gap between the primary and the general election would help candidates gain momentum in their campaigns.

“Now all the candidates have three months to reset their campaigns and get stronger for the general election,” Shew said.

Primary results are unofficial until Douglas County commissioners canvass the results Monday. Shew said two election changes the Kansas Legislature approved this year could lead to greater changes in the vote total than in past elections. Advance ballots turned in at polling sites Tuesday are to be counted after election day, and mailed ballots with a postmark of Tuesday will be counted if they arrive at the county clerk’s office by Friday, he said.