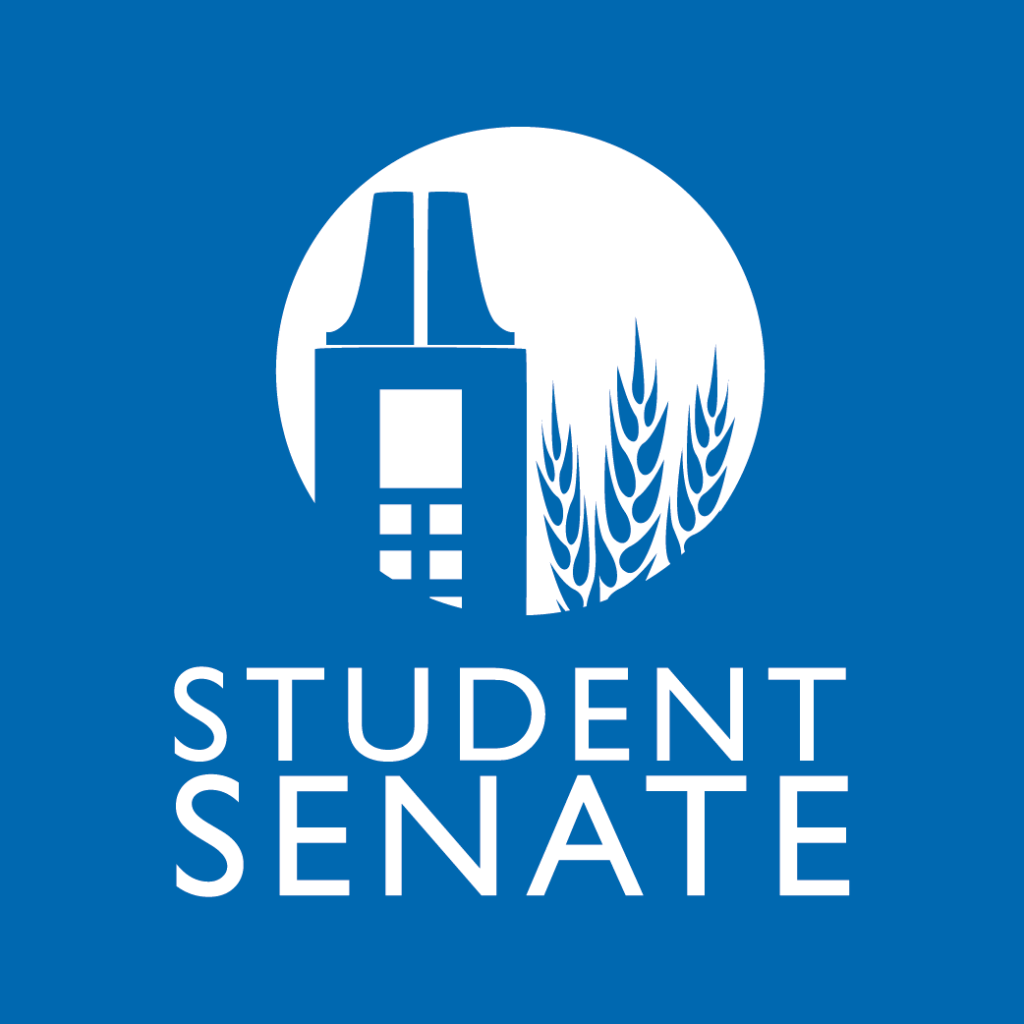 The University of Kansas Multicultural Student Government did not materialize into what organizers first demanded: a separate student senate with powers essentially equal to KU’s existing one, thought to be unprecedented among U.S. universities.

This week, MSG did, however, get a major bump in power on campus.

The KU Student Senate took actions Wednesday that — pending the chancellor’s ratification — would make MSG an entity less than a separate governing body but more than a KU student club, plus give it control over more money than any other KU student organization.

“This is definitely not progress toward getting the power and autonomy that Multicultural Student Government was looking for. It is not satisfying the demands of Rock Chalk Invisible Hawk,” said Trinity Carpenter, a senior from Richmond and chair of the MSG board. “Although it is progress for multicultural students.”

Under the legislation, MSG will become a “sibling organization” within Student Senate, similar to the Center for Community Outreach, Senate communications director Connor Birzer said. Among other accommodations, Student Senate ceded one of its seats on the University Senate to MSG.

Starting next school year, MSG will receive roughly $45,000 per year from required campus fee revenue; that amount equates to about $1 per student per semester. MSG also will have control over distributing money from KU’s existing Multicultural Education Fund, roughly $40,000 per year. 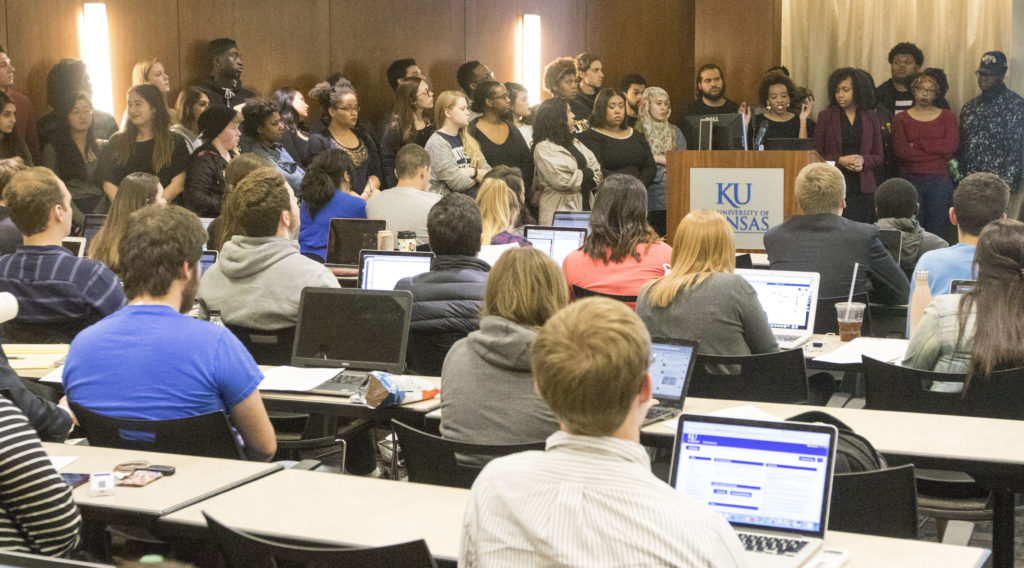 Speaking to the Kansas University Student Senate, Jameelah Jones is joined by dozens of students and supporters of the Multicultural Student Government initiative during the Student Senate's meeting Wednesday evening March 9, 2016, at the Kansas Union.

Since informally organizing in fall 2015 after KU’s town hall forum on race — where a group of mostly black students calling themselves Rock Chalk Invisible Hawk demanded KU establish an independent government for multicultural students — MSG has been pushing for recognition as a separate governing body. Organizers say current Student Senate representatives and policies fail to adequately represent students of color and other marginalized identities on campus.

Past debates at Student Senate meetings have been lengthy and heated, including attempts to oust the 2015-16 Student Senate president, vice-president and chief of staff. Students say discussions this semester have been difficult and exhaustive but ultimately led to Wednesday’s compromise.

Next week, she said, the MSG board plans to discuss how to populate its membership moving forward: a job application-type process for the paid executives, like Center for Community Outreach? A nomination or appointment system? Or a full student election?

Carpenter — who said she’ll graduate in May along with most of the other current MSG executive board members — said she wants future leaders of MSG to have a chance at finding other funding and becoming the parallel government that was first envisioned.

“I don’t think Student Senate has the authority to come in and codify MSG and create the situation where we’re under their oversight and purview without our consent,” Carpenter said. “But at the end of the day, MSG students have been empowered and have been able to participate in student government on their own terms, and we definitely appreciate that.”

Of MSG’s $45,000, according to the budget presented at the Student Senate meeting:

• $16,000 creates a new fund called the Student Opportunity Fund, for multicultural students to request on an individual basis “to help them advance personally, professionally, and academically.”

For speakers and event programming, MSG can request money from Student Senate like other student organizations do. 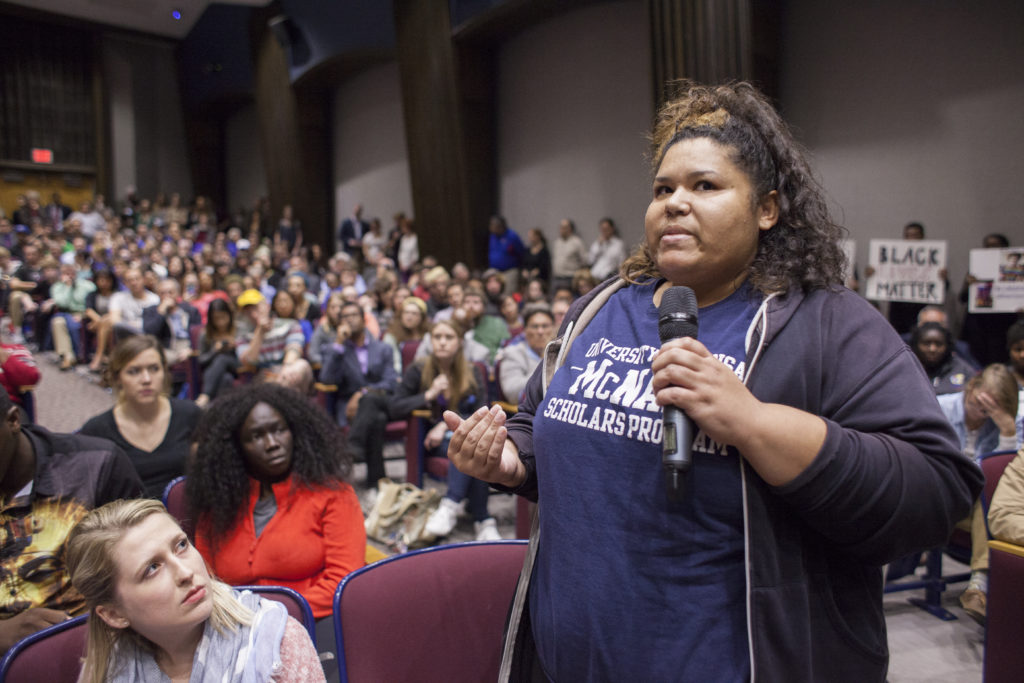 Trinity Carpenter, Kansas University senior from Ottawa, speaks during a KU town hall forum on race Wednesday at Woodruff Auditorium in the Kansas Union. Carpenter shared her concerns about how to speak up about race issues on campus without worrying about consequences.

The Multicultural Education Fund has about $40,000 per year available for MSG to allocate, plus reserves, Carpenter said.

Control of the fund has bounced around in recent years, Carpenter said. She said MSG’s goal is to take ownership of it, help promote it to groups that don’t know it’s available, and ensure it’s actually utilized for multicultural events.

A year ago, Student Senate’s first attempt at creating and funding MSG was blocked by Chancellor Bernadette Gray-Little.

In spring 2016, Senate voted to give MSG a $2 student fee that would have brought in about $90,000 a year for the group, even though it had only formally registered as a student club a week earlier and had no charter or bylaws on file with the university. A couple of weeks later, the Senate also gave MSG control of allocating the Multicultural Education Fund, which Carpenter said MSG did retain this school year.

Gray-Little said at the time she vetoed the $90,000 in funding because MSG did not yet exist as a government, and university code doesn’t allow more than one government representing any of KU’s constituency groups in University Senate.

She also said she did not think more than one governing body representing KU students “would be very productive in the long run.”

Carpenter said MSG currently has about 15 members, eight of whom are on its board.

Members don’t have to be minorities or members of other marginalized groups themselves, she said. Any student interested in serving marginalized students can be a member of MSG.

“I’m hoping now that we have an operating budget we can do bigger and better things,” she said.

Gray-Little must approve Student Senate’s proposed 2017-18 campus fee schedule — including the new fee allotted for MSG — before it takes effect.

Birzer said she had not done so as of this week.

However, the chancellor must make a decision prior to proposing 2017-18 fees and tuition rates to the Kansas Board of Regents, which is expected to take place in mid-May.