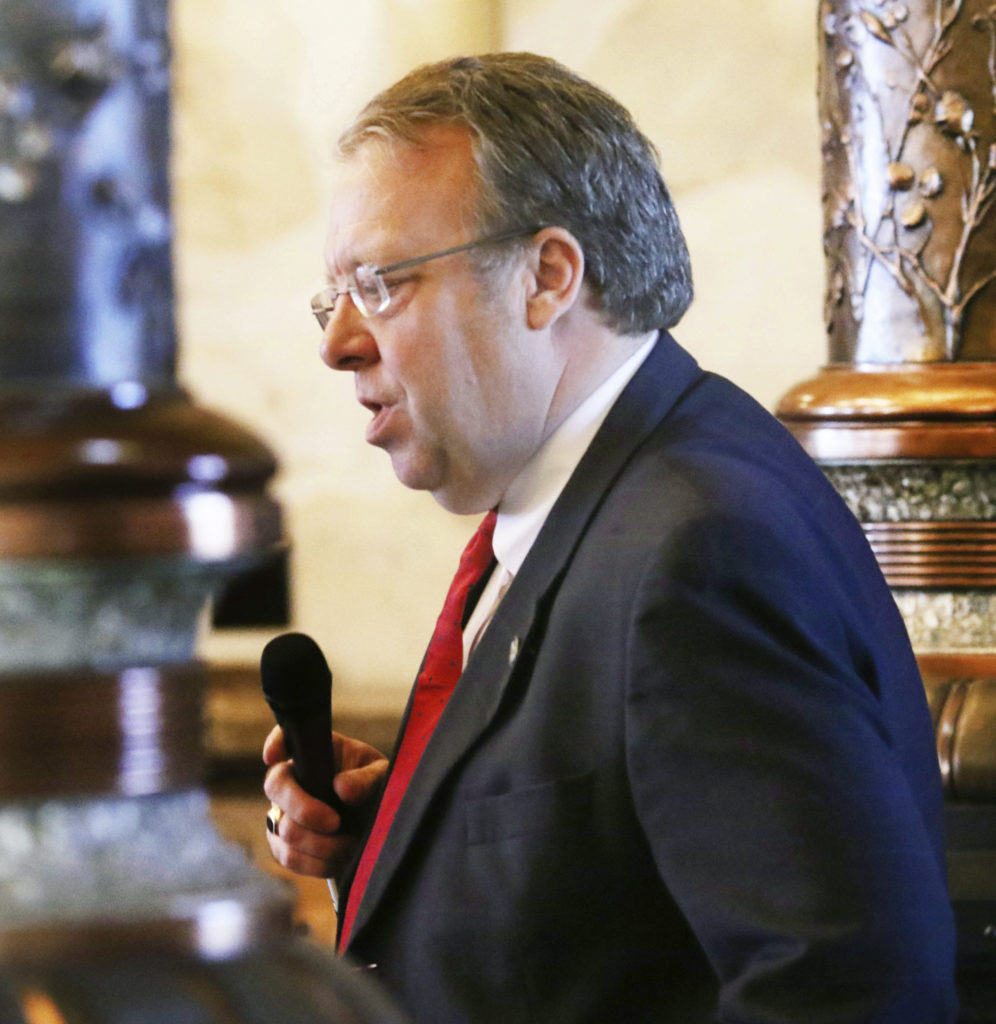 Sen. Tom Holland, D- Baldwin City speaks during Senate debate Thursday, April 6, 2017, in Topeka, Kan., on a bill to turn Kansas into a flat-tax state. Holland said the flat tax would be nothing more than a policy win for GOP Gov. Sam Brownback, with no solutions for Kansas' budget. (Thad Allton /The Topeka Capital-Journal via AP)

Topeka ? The Kansas Senate on Thursday said no to a tax bill that Gov. Sam Brownback had said he would sign, leaving state lawmakers with no plan to address a looming revenue shortfall of more than $900 million over the next two years.

By a vote of 3-37, the Senate rejected a bill that would have replaced the state’s current two-tiered tax system with a single “flat” tax rate of 4.6 percent on all taxable income.

That would have meant a significant tax increase for middle-income wage earners, who currently pay only 2.7 percent on all or most of their income — the first $15,000 for individuals, or $30,000 for married couples filing jointly.

It would have had a much smaller impact on upper-income wage earners, who already pay the higher 4.6 percent rate on most of their income.

But the bill also would have repealed one of Brownback’s signature tax cuts from 2012 that allows more than 330,000 business owners to pay no income tax at all, a provision that has come to be known as the LLC loophole. It also would have lowered the sales tax on food purchases by one percentage point.

Supporters of the bill said it would have made the tax system fairer and would have raised an additional $650 million over the next two years to fund government services.

Critics, however, said that was far short of the nearly $1 billion shortfall the state faces over that period, which doesn’t include additional money the state will need for a new school funding plan in response to a recent Kansas Supreme Court ruling that said current funding is inadequate and unconstitutional.

“This is Brownback and company, they’ve finally given up on the march to zero, so now it’s going to be the march to the flat tax,” said Sen. Tom Holland, D-Baldwin City, the ranking Democrat on the Senate tax committee.

The bill also faced opposition from conservatives like Sen. Mary Pilcher-Cook, R-Shawnee, who oppose tax increases as a matter of principle.

“There are basically two different viewpoints up here, but we are battling for the people,” she said. “There is one group that believes in higher taxes, spending more of the people’s money and growing government. Then there is another viewpoint that says taxes need to be lower. There needs to be reductions in spending and government needs to be limited.”

Thursday’s vote came on the next-to-last day of the regular session. Senate Majority Leader Jim Denning, R-Overland Park, said he wasn’t sure what the Senate will do next in terms of taxes.

“Beats me,” he said after after the vote. “It’s a hard task. We’ll continue to work, and I think April 20 will give us another variable out of the way.”

April 20 is the day lawmakers receive new, updated revenue estimates showing how much the state can expect to receive over the next two fiscal years under current tax policy.

Lawmakers plan to adjourn Friday for a three-week break. They will return May 1, with the new estimates in hand to finish work on a budget and tax package.

The Senate has been stalled on the tax issue since Brownback vetoed a bill in February that both chambers had passed by large majorities. The House voted to override his veto, but the Senate came up three votes short in its override attempt.

The Senate has passed a preliminary budget that would close some of the current budget gap, in part by borrowing money from an idle funds investment account. But that bill does not provide full funding for state pension payments, a question that senators have decided to revisit after their three-week break. The Senate so far has not debated its own budget bill.

And neither chamber so far has addressed the question of school funding, which the Kansas Supreme Court has said is currently inadequate and unconstitutional. A House committee is expected to advance a bill after the break that would add around $150 million a year in funding, an amount that is not included in the current estimates of the budget shortfall.

Many in the House, and some in the Senate, have said the two chambers ought to stick with their positions on that bill and make whatever changes are needed to sway the final few votes in the Senate to override another veto.

That bill would have repealed the small business exemption, and it would have reinstated a third tax bracket for upper-income earners to generate roughly $1 billion in new revenue over the next two years.

“The only plan that has had a constitutional majority was a bi-partisan bill,” Senate Democratic Leader Anthony Hensley of Topeka said in a statement released after the vote Thursday. “As long as the Governor and Senate Republican leaders continue to ignore the will of the people who overwhelmingly voted for change in the 2016 elections, we will continue to waste time and tax dollars on proposals with embarrassingly low support.”