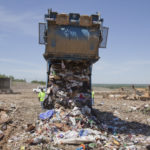 A city of Lawrence trash truck unloads a full 21,000-pound cargo of household refuse at the Lawrence sanitary landfill.

Decomposing trash that was buried decades ago in the Hamm Landfill north of Lawrence will soon become a source of fuel.

Plans to construct a $16 million methane gas plant and pipeline are underway at the Hamm Landfill, which is about 5 miles north of Lawrence and which serves about 500,000 Kansas residents. Hamm representatives say in addition to producing a renewable fuel source, the plant will reduce the greenhouse gas that’s emitted when organic trash in the landfill breaks down.

“For a town like Lawrence that’s very environmentally conscious, we’re able to take the potential greenhouse gas footprint that’s associated with all paper products and anything that is organic and eliminate it,” said Charlie Sedlock, division manager at Hamm.

As part of the operation, extraction wells will capture the methane gas generated as the trash breaks down. The gas will be processed at the plant before being transported for distribution and eventual sale. Hamm has partnered with Renewable Power Producers, of North Carolina, to develop the landfill well field, gas processing plant, pipeline and interstate pipeline interconnect.

Methane is the second-most prominent greenhouse gas, and landfills are responsible for about 20 percent of its emissions, according to the Environmental Protection Agency. Though emissions of carbon dioxide are several times higher that those of methane, because methane is more efficient at trapping radiation its impact on climate change is more than 25 times greater than carbon dioxide over a 100-year period, according to the EPA.

For its part, the City Commission at its most recent meeting approved a licensing agreement for the easement of the project. The license allows Renewable Power Producers to install, maintain and operate the pipeline and facilities to transport landfill gas within the city right-of-way and across the Mudcreek Levee. The licensing agreement between the city and RPP will generate $58,000 for the city over the next 30 years.

All of Lawrence’s solid waste is taken to Hamm Landfill, and the project provides a communitywide benefit, said Chuck Soules, the city’s public works director.

“We’re probably one of the largest single users at the landfill,” Soules said. “…Instead of just letting that gas vent into the environment, it’s going to be captured and reused.”

Once the plant is operating, the methane gas collected will be sold to various companies through a distributor, according to information provided to the City Commission. The facility will employ four full-time and four part-time employees. Sedlock said the cost to build and run the plant would not increase the collection costs that Hamm charges to municipalities, and that instead the revenue from the sale of the gas would go to offset those costs.

“We don’t want this to become a big capital expenditure that gets passed on through rates,” Sedlock said. “We would like for this to be a project that pays for itself.”

As far as work on the plant itself, Sedlock said 10 gas wells have already been installed and that 70 additional wells will be added over the next six to eight weeks. Construction of the processing plant has already begun off-site, and Sedlock said the target is to have the plant up and running in six to eight months.