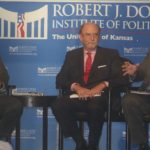 Kansas Secretary of State Kris Kobach makes a point at a Dole Institute forum Tuesday on election laws and their purpose. Also on stage are forum moderator Stephen McAllister (left) and Mark Johnson, an adjunct professor for the KU schools of Law and Journalism.

Kansas Secretary of State Kris Kobach and his occasional courtroom adversary Mark Johnson were in agreement on two key points Tuesday at a Dole Institute of Politics forum on voting laws and their intent.

At the Constitution Day forum titled “Projecting Election Integrity, Voter Suppression, or Something Else?”, sponsored by the Dole Institute and Kansas University School of Law, the two attorneys agreed there is little mention of voting in the U.S. Constitution and, thus, states have broad authority to regulate when, where and how citizens vote. There was great diversity in who was allowed to vote in the original 13 states, and the constitution would not have been ratified had that document defined voters, Kobach and Johnson agreed.

That constitutional absence leaves a great deal of “gray areas,” which continue to be sorted out through ongoing litigation, the two attorneys said.

Although the forum was less a debate than a vehicle for both attorneys to express their views on questions posed by moderator Stephen McAllister, former dean of the KU Law School, it did produce a couple of sharp, if friendly, exchanges between the two men, especially on the topic of the secretary of state’s attempts to advance a two-tiered voting system.

The two disagreed on the intent of the legislation Kobach has pursued since he took office as Secretary of State in 2011: voter identification requirements and proof of citizenship for voter registration.

Johnson, an adjunct professor in the University of Kansas’ law and journalism schools, said the dates when the laws started being passed in other states gave a clue to their purpose. They began to pop up after the wave election of 2012, in which Republicans won control of the U.S House of Representatives and many state legislatures, he said.

He stated that motivation of voter suppression more clearly when addressing the U.S. Supreme Court’s 6-3 decision in 2008, upholding an Indiana photo ID law. That decision was an “outlier” because the court didn’t consider the impact of the law. Subsequent litigation sought to make the case that the laws created a barrier for poor and minority voters, many of whom didn’t have access to birth certificates or other proof of citizenship documentation.

Johnson cited the words of U.S. Circuit Judge Richard Posner, stating voting was a low-reward activity because an individual vote rarely made the difference in a race. Therefore, Posner argued, anything states do to put a “low hurdle” in the way of voting will have an adverse effect on participation.

There was no evidence of widespread voter fraud, Johnson said. What few cases that have been discovered were of people voting in Kansas and other states, an action that new laws would not have prevented and was already against the law, he said. Kobach’s office has not prosecuted any cases of false or duplicate registrations, he said.

In his replies, Kobach agreed there was historical motivation for the laws, but said they stemmed from the 2008 election and the community action organization ACORN paying people to register to vote, as well as Minnesota Sen. Al Franken’s very close and disputed election to the U.S. Senate.

Kansas was the first state to pass a comprehensive measure that tied vote ID and proof of citizenship, Kobach said. The law has since been duplicated in other states interested in voter security, he said.

Kobach denied the laws were designed to suppress groups that traditionally vote for Democrats, and cited evidence from recent Kansas elections showing no statistical difference in turnout since their passage. He said he believed “voting should be easy, but fair,” and argued that testimony in Kansas Legislature when legislation was being considered revealed existing abuses.

His office pursued the double-voting offenses first because they were easy convictions and because the statutes of limitations were about to expire on the cases, Kobach said. County clerks have informed him of cases of false or fabricated registrations, he said.

Kobach and Johnson most sharply disagreed on the consequences of the state’s attempt to have a two-tiered voting structure in this year’s election cycle. The system would have prevented voters who registered at motor vehicle offices before the state’s proof of citizenship requirement was passed in 2013 from voting in state and local elections in this year’s August primary or November general election. However, it would have allowed those same voters to cast ballots in federal elections.

In late July, the Kansas State Rules and Regulations Board worked with Kobach to pass a rule establishing the two-tiered system for 120 days. Johnson was critical of the board’s quick action on the rule and its timing, noting the action would expire the day after the general election. Although a Shawnee County District Court judge issued a temporary injunction against the rule, it clearly discouraged voter participation among the 17,500 voters it affected in the primary, Johnson said. Only 75 of the voters cast ballots in the primary, compared to an overall voter turnout of 23.5 percent.

Kobach countered that the low turnout number among the affected voters stemmed from a general lack of interest in voting among many who were registered while getting driver’s licenses. In addition, he said, many of the voters had moved since they obtained their driver’s licenses and were no longer eligible to vote where they had registered.