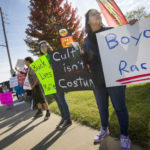 At Lawrence’s Spirit Halloween costume store, customers have their pick of spooky outfits.

During the lunch hour Friday, shoppers drifted through aisles filled with creepy witches, demonic-looking clowns and all manner of monsters and ghouls. Outside the store, however, a group stood on the sidewalk in protest of costumes far scarier, in their opinion, than any ghost or zombie.

Armed with hand-painted signs bearing messages like “Culture isn’t a costume” and “Boycott Racism,” the dozen or so activists had gathered at Spirit Halloween, 1519 W. 23rd St., to protest the store’s Native American-themed costumes.

Lawrence High School science teacher Andy Bricker, who organized the protest along with several allies of the local Black Lives Matter movement, said the outfits in question, which are still being sold at the store despite protesters’ requests to remove them, are “harmful” examples of cultural appropriation.

Though Friday’s protest focused on Native American-themed costumes in particular, Bricker also spoke about the afro and dreadlock wigs on display inside Spirit Halloween. These, too, are representations of cultural appropriation, he said.

“Those are costumes people wear one day of the year to pretend like they’re part of a culture and then the rest of the year, that culture gets oppressed and marginalized, shot by police on camera,” Bricker said, explaining the larger phenomenon of people dressing up as other ethnicities for Halloween. “But on this one day of the year, it’s OK to buy a stereotype and wear it.”

Costumes such as “Noble Warrior” and “Indian Princess,” the latter of which comprises a skimpy faux-buckskin dress and feather headdress, are offensive on several levels, said Shadow Spooner, a Lawrence student and member of the Lakota tribe who attended protests Friday with her friend Alberta Downwind, who is affiliated with the Forest County Potawatomi tribe.

The girls, both seniors at LHS, expressed concern over the depiction of Native Americans as stereotypes. Non-native people who wear these costumes may not be aware of the cultural and spiritual significance of traditional Native American garb, which is varied and distinct among several “hundreds” of individual tribes, Spooner said.

And, outside of ceremonial occasions such as powwows, headdresses and other regalia are rarely worn by today’s indigenous people, protesters pointed out.

“They depict us as some sort of mythological creature, like we’re not real,” Spooner said. “And it doesn’t make sense.”

The costumes on display inside Spirit Halloween, they said, are generic representations of a vast culture, and they’d like to see them removed from store shelves.

Requests at Lawrence’s local Party America and Target stores, he said, were successful in getting those businesses to remove similar-themed costumes, at least for now.

But Spooner, who started working at Party America just this month, is only cautiously optimistic. She hopes her employer sticks to its commitment; if not, she might consider quitting her job.

“It’s just not OK. You can’t do that anymore. It used to be OK and nobody would even speak up about it,” she said. “We’re in 2016, almost 2017, and these cultures are still being oppressed.”

Bricker said the protests would likely continue in the weeks leading up to Halloween if the store does not remove the costumes.

Spirit Halloween employees declined to comment on the matter, but did acknowledge that the decision to remove inventory from store shelves must be approved by corporate leadership first.