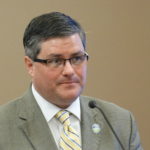 Douglas County Clerk Jamie Shew said there was no attempt to favor Democratic voters over Republicans when his office mailed out tens of thousands of advance ballot applications, but the chairwoman of the Douglas County Republican Party said she’s not so sure.

“This office takes very seriously the integrity of election administration and our staff, which consists of members of all parties and unaffiliated, dedicate themselves to providing service in a non-political atmosphere,” Shew said in an email to reporters Tuesday.

The controversy concerns informational brochures that the County Clerk’s Office mailed out Sept. 16 to more than 36,000 households throughout Douglas County, advising them about the various options for voting in the election, including advance voting by mail. It included an application voters could use to have an advance ballot mailed to them.

It also comes at the same time Republican presidential candidate Donald Trump has been claiming, without showing any evidence, that this year’s national election is being “rigged” in favor of Democrat Hillary Clinton.

On Monday, Douglas County Republican Party Chairwoman Kathleen Ammel wrote to Shew, questioning how the office decided where to send the mailings and suggesting that the list was skewed in favor of Democratic voters over Republicans.

“While we are fully supportive of every effort to increase voter engagement, it appears that advance voting applications have been sent to registered Democrats at a higher rate than registered Republicans,” Ammel wrote.

Specifically, she alleged, when comparing the proportions of Democrats and Republicans on the county’s voter registration rolls with those who received the mailings, there was a 1.71 percent “skew” in favor of Democrats.

Shew, however, said the mailings were not sent to individual voters, but instead to households with at least one registered voter in them. That included households that could have multiple voters with different party affiliations.

“We sorted by households with active voters,” Shew said. “At no point was any consideration made for any other criteria.”

Shew said his office decided to send the mailings to households instead of to individual voters primarily to save money. At the time of the mailing, there were 78,498 registered voters in Douglas County. At 43 cents per mailing, it would have cost $33,754 to send one to each registered voter.

By sending them only to households with one or more registered voters, he said, the cost was $15,648.

Shew said this is the third election cycle in which his office has sent out such mailers, and he said other large counties have used them as well. He said it began in 2012 in an attempt to reduce the long lines that occurred at some polling locations in the 2008 election.

Ammel said her concerns were not prompted by Trump’s recent allegations of widespread vote-rigging in the election. “I was thinking more of the local races than the national races,” she said.

But Shew — a Democrat who is running unopposed for re-election this year — said election officials both locally and nationwide have expressed grave concerns about Trump’s recent remarks and the long-term impact they could have on public confidence in the electoral process.

“We have some poll workers who are very nervous about a lot of stuff they’re hearing,” he said. “I understand that rhetoric is being used for political purposes, but it has the ability to do damage beyond just politics.”