Crime decreased in Lawrence for 2015 in nearly every category, statistics show 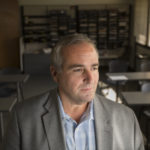 Lawrence Police Chief Tarik Khatib is pictured in the briefing room at the Law Enforcement Center on Wednesday, Oct. 12, 2016.

Statistically speaking, 2015 was a below-average year for crime in Lawrence, which is a good thing from the perspective of local law enforcement.

Data collected by the Lawrence Police Department and organized by the Kansas Bureau of Investigation show that 10 of the 11 crime categories declined over the past decade. But the one crime category on the rise was rape, and the report also showed the amount of crime in Lawrence doesn’t necessarily match up with its small-town image.

“That is a concern for me,” said Lawrence Police Chief Tarik Khatib. “I think of where we’re at maybe geographically, in terms of people coming and going here from other communities. It’s a destination location, this metro area, as far as the college being here, it’s got a great night life, lots of events.”

The Journal-World recently examined data published by the KBI for Lawrence, Manhattan, Olathe, Overland Park, Topeka and Wichita and discussed the results with Khatib.

Overall, Khatib said he is “cautiously pleased” with the downward trend of local crime. The results are likely due to a combination of national trends mixed with more efficient local police work, he said.

Khatib said he believes the KBI’s analysis can be useful for police, but it’s not something to rely on exclusively.

“It’s a snapshot,” he said. “But it doesn’t necessarily tell you the whole story.”

What the Lawrence Police Department turns over to the the KBI is the total crimes reported, Khatib said. This number is not necessarily the same as the actual number of crimes occurring, he said. Those numbers could be either higher or lower.

“Somewhere in the middle is where you’re aiming,” he added.

Addressing the above-average rape statistic for 2015, Khatib said there could be a number of reasons the numbers have risen steadily in that category since 2005.

Although the town’s population may well contribute to the rising rape statistic, it’s not likely the increasing number of Lawrence residents is entirely to blame. Between 2005 and 2015, the data shows Lawrence’s population rose by about 11,500 people.

“One potential could be that we have more rapes,” Khatib said. “A second one is that more people are willing to report it. And a third is that we do a better job investigating them and holding people accountable so they’re more willing to report it and feel like they’re being taken more seriously than they were 10 years ago.”

Alongside reported rapes, murder can be a misleading statistic to grapple with, Khatib said. Since 2005, Lawrence has averaged about two murders a year, the data show. But for five years there were no murders in town, and the crime has spiked recently.

Many of the murders were singular events and not something police would have been able to prevent, Khatib said.

“It’s not like these homicides are attributable to a certain gang who are now on our radar and this is a drug-related thing,” he said.

Between 2005 and 2015 the total number of crimes reported per 1,000 people in Lawrence dropped from 51.4 to 41.3, approximately 20 percent, the data show. That’s good, but some other communities have seen crime rates drop even more steeply. For comparison, Manhattan saw a decrease of 38 percent, Olathe 49 percent, Overland Park 41 percent, Topeka 31 percent and Wichita 5 percent.

For a given community a decrease in the total crimes reported per 1,000 people doesn’t necessarily mean crime is down, Khatib said.

“If we’re saying that 15 years ago we had a crime rate of four-something and today that particular category is two-something, that may not mean there’s actually half as many crimes,” he said. “It may be the same number of crimes occurred, but your population went up.

“That’s why you’ve got to be cautious not to overinterpret,” he said.

Over the same time span, Lawrence’s reported property crimes per 1,000 people decreased from 47.5 to 38.8, approximately 18 percent.

Addressing the statistics, Khatib admitted Lawrence’s crime statistics are more similar to urban areas like Topeka and Wichita than communities like Manhattan, Olathe and Overland Park.

And although many people might compare Lawrence to another college city like Manhattan, Khatib said there are stark differences.

Some crimes in Lawrence can be attributed to people from other cities visiting or passing through, Khatib said. For example, a recent string of robberies on Lawrence’s south side where a dog was shot and killed involved nonresidents.

“Manhattan is its own island out there,” he said. “So people from big cities aren’t necessarily going to drive all the way out to Manhattan just to go to Manhattan.

“We like the small-town feel that Lawrence has, but we do have some big-city challenges,” Khatib said. “And one of them is manifested through higher crime rates, higher calls to service and higher service needs.”

Crime statistics, like those published by the KBI, are one of many tools the Lawrence Police Department uses to guide its efforts, Khatib said. And although the numbers might indicate a decrease in crime, there are always things police and members of the community can do better, he said.

“I think we’re a safe community,” he said. “Is (Lawrence) safer as far as crime statistics? It would appear so. But I still see behaviors and people doing things I wish we could be better about.”