Counselor sues Haskell, claiming she was demoted for objecting to school’s treatment of rape victim 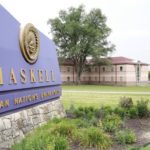 Angelina Adams was Haskell’s counselor on call when a female student reported being raped by two football players in November 2014 in a Haskell dorm, according to Adams’ lawsuit, filed Monday in federal court.

Assigned to assist the woman, named in the suit only as Jane Doe, Adams coordinated support services, sought academic accommodations, advised her of her Title IX rights and generally counseled her while lengthy criminal procedures against the men moved forward, according to the lawsuit.

Jared Wheeler and Galen Satoe were criminally charged with rape and expelled from Haskell following the woman’s report. Wheeler and Satoe’s criminal trials both ended with hung juries this summer, and the two men are scheduled for their second trials in December 2016 and February 2017, respectively.

According to Adams’ lawsuit:

Jane Doe was involved in a “dispute” with a different male student on March 31 in a Haskell dorm, and Haskell expelled her for “hitting” the man.

Adams protested the following day, telling administrators Tonia Salvini and Danelle McKinney there was evidence Jane Doe was actually the victim in the altercation and that the university should give her due process before taking disciplinary action against her.

Adams said the male student left bruises on Jane Doe’s arms and that she herself had met Jane Doe and photographed the bruises at a medical facility. Adams also said she discovered text messages from the male student indicating Haskell was pressuring him to press charges and file a “baseless” Title IX complaint against Jane Doe. Adams said she shared this information with administrators.

Within the month, Haskell told Adams to have no more contact with Jane Doe, removed her from her counseling position, changed her job duties to “special projects” and instructed her to stop seeing students. They also removed her from on-call duties that provided a regular opportunity for time-and-a-half pay.

Adams’ lawsuit says Joshua Arce, Haskell’s chief information officer and acting dean of students at the time, also was involved in her demotion.

Arce accused Adams of conspiring with Haskell’s disabilities coordinator, Jane Doe’s instructors and residential advisers to “accommodate” Jane Doe’s academic absences while the criminal trials proceeded, according to the suit. Arce also accused Adams of moving Jane Doe into her home, and conspiring to prevent the male student involved in the dispute from playing basketball for the school, according to the suit.

Those accusations are not true, Adams said in her suit.

Title IX is the federal law that prohibits gender-based discrimination in education and the law under which universities are required to investigate and take measures to prevent sexual harassment, including sexual violence, on their campuses.

Curry is also representing two women who are suing the University of Kansas under Title IX. The women, both former KU rowing team members, said they were sexually assaulted by the same KU football player in campus housing and that KU failed to properly respond to their reports.

Curry said his firm first worked with Adams this summer, when Haskell and the court asked Adams to provide Jane Doe’s education, medical and counseling records for defense attorneys in Wheeler’s and Satoe’s criminal trials, which Curry said was not appropriate.

“Plaintiff was forced to hire private counsel in order to convince Joshua Arce to provide her representation and take steps to protect private student records as HINU was required to under the law,” Curry wrote in the suit.

He said Adams ultimately did not personally turn over the records to the court, though Haskell did, and that she was not required to testify in either trial.

Haskell’s decision to demote Adams, expose her to liability of unlawfully disclosing student records, berate, harass and humiliate her “was motivated by a retaliatory animus stemming from Plaintiff’s advocacy for Jane Doe following Jane Doe’s rapes and her expulsion,” Adams’ suit said.

Adams continues to suffer “great pain of mind and body, shock, emotional distress, embarrassment, loss of self-esteem, disgrace, humiliation, and loss of enjoyment of life … has sustained loss of earnings and earning capacity; has incurred and will continue to incur expenses for psychological treatment, therapy, and counseling as well as other economic hardships; and has incurred attorneys fees and costs in defending her rights.”

Curry said Adams is now classified as a “career counselor” at Haskell.

The suit requests a jury trial and seeks an unspecified amount of money to compensate Adams for damages and attorney fees. Curry said Adams also wants her old job back, as a student counselor.

A Haskell spokesman did not provide any comment on behalf of the school on Monday.

Arce is the son of Haskell President Venida Chenault and the subject of a recent federal nepotism complaint filed by Haskell instructor Theresa Milk. Haskell has since removed Arce from the acting dean of students position.

The men accused of raping Jane Doe are not named in Adams’ lawsuit, and Curry said he does not think his client’s civil lawsuit will affect their pending criminal trials.

“The wrongful conduct that Angelina Adams is suing Haskell for occurred long after the two rapes. She’s talking about how Haskell treated her for more than a year after,” Curry said. “The difference in time is major.”