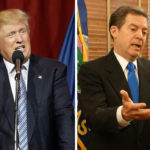 Topeka ? Republican Gov. Sam Brownback issued a statement Saturday condemning vulgar remarks about women that GOP presidential candidate Donald Trump made in a 2005 taped conversation, but he is not withdrawing his support.

“The passage of time does not change the unacceptable language used by Donald Trump,” Brownback said in a statement emailed to reporters. “While he has apologized, his statements remain demeaning, inappropriate and unacceptable.”

Nevertheless, Brownback’s press secretary Eileen Hawley said in a follow-up email that Brownback has not withdrawn his support for Trump.

Trump’s 2005 comments were recorded on video as he was preparing to do a guest appearance on a daytime soap opera while simultaneously being interviewed by the TV show “Access Hollywood.” The video was obtained by the Washington Post and published on its website Friday.

In the conversation, Trump uses vulgar and sometimes obscene language as he boasts of having made advances on a married woman and says, “when you’re a star you can do anything,” including grabbing women inappropriately.

Brownback initially endorsed Florida Sen. Marco Rubio in the GOP primaries, but threw his support behind Trump after the New York billionaire won the nomination. He has since served as an adviser to the Trump campaign on Catholic issues.

Kansas Secretary of State Kris Kobach was an early supporter of Trump’s and has served as a surrogate on the campaign trail to talk on national news programs about immigration issues.

Kobach was not immediately available Saturday to comment on the uproar over Trump’s remarks.