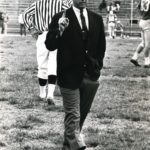 Pepper Rodgers, Kansas football coach from 1967-70, won the Big Eight title in 1968 with one remarkable stable of assistant coaches.

Kansas State miracle worker Bill Snyder came from former Iowa football coach Heyden Fry’s fruitful coaching tree. The national assistant coach of the year award is named in honor of Frank Broyles because of the many assistants he had at Arkansas who went on to successful careers running their own programs.

Not as widely known but truly remarkable in terms of the fruit it bore was the 1968 staff assembled by then University of Kansas head football coach Pepper Rodgers.

Rodgers, who left Kansas after the 1970 season to coach UCLA, will spend his 85th birthday at Memorial Stadium, where he will watch the Jayhawks play TCU in a Big 12 game Saturday. Donahue, former KU assistant and Nebraska-Omaha head coach Sandy Buda, and former Kansas All-American David Jaynes will be among those in attendance to honor Rodgers.

How did Rodgers, all of 35 when he made his head-coaching debut with Kansas in 1967, assemble such an impressive staff? He had no secret formula and simply followed his instincts.

“We were all very young,” Rodgers said by phone from his home in the Washington, D.C., area. “They were all great coaches.”

Cooper and Rodgers worked together as assistants under Tommy Prothro at UCLA. Dick Tomey, then working at Davidson, introduced himself to Rodgers by phone and convinced the head coach to bring him to Lawrence for an interview.

Rodgers said of Tomey: “I liked the way Dick was aggressive, but I didn’t think I was going to hire him. Then I asked him if he was married.”

By the time Tomey had finished answering that question, Rodgers had changed his mind.

“He said, ‘Yeah. I met a woman on the plane. She was the stewardess. I tried to get her name, tried to date her, but she wouldn’t give me her last name, so all I had to go on was her first name. I tracked her down, found her and married her.’ ‘You’re hired,'” Rogers said.

That one story told Rodgers plenty.

“Tracked her down, found her, married her? This guy knows how to recruit,” Rodgers said.

Rodgers was an offensive coach at UCLA when Donahue was a 197-pound, two-year starter at defensive tackle.

After graduating, Donahue served in the Air National Guard for six months. As soon as Kansas hired Rodgers, Donahue said he wrote him a series of letters, each met with a rejection letter. Donahue offered in his final letter to come to Lawrence and work for free for a year. Rodgers showed the letter to Tomey, who convinced the head coach it was a no-lose proposition.

Donahue arrived in Kansas in advance of the 1967 season and was assigned to coach the freshman team. He lived off of his savings from National Guard service until the money was close to running dry a few months into his stay in Lawrence, at which point he informed the couple that had him over for dinner — John and Helen Cooper — that he was going to have to return home to Southern California and planned to inform Rodgers of that the next day.

“Helen said, ‘We can put Johnny and Cindy in the same room and you can stay here until you get settled.’ I resisted, but John and Helen convinced me to do that. If they don’t make that offer, I probably go home and I probably don’t end up coaching,” Donahue said.

More importantly, Donahue added, he would not have met his wife, Andrea, a KU grad.

“That’s why my memories of KU run so deep,” Donahue said. “Pepper and Dick Tomey gave me my first chance when I never had coached. John and Helen Cooper made me that offer and convinced me to stay with them. And Sandy Buda set me up with my wife on a blind date. They are all close friends to this day.”

Donahue said he is looking forward to going to The Wheel for “lunch and a beer.” He said it will be his second visit there, his first coming the week he moved to Lawrence 49 years ago, before he knew it was off limit to coaches because it was where the players hung out.

Jaynes organized the event, which includes a Friday night dinner with old friends, in honor of Rodgers, even though he never actually played for him. Freshmen were not eligibile to compete in the NCAA then and Jaynes played for the freshman team in Rodgers’ final season at Kansas. Rodgers took Donahue, promoted to a paying position on the varsity by 1968, with him to Westwood.

“David was the top player in the state of Kansas, someone KU and K-State had to have,” Donahue said. “He looked exactly like Joe Namath on film. I had Bonner Springs as part of the area I was responsible for. We were in a recruiting meeting and when I discussed the kids in my area I started with Bonner Springs. I said, ‘This guy’s the best quarterback I’ve ever seen.’ Pepper said, ‘Well, I don’t know how many you’ve seen, Donahue.’ We threw on that film and the guy jumps off the film at you. Pepper immediately thought ‘I better put my most experienced, best recruiter on this guy. We have to have him.’ I convinced Pepper I could get him.”

Rodgers again followed his gut on letting Donahue, then 25, pursue the must-have recruit. Clearly, the head coach knew how to evaluate football coaches.

“We kept recruiting him even after he committed to Alabama,” Donahue said. “We’re great friends today, a relationship that grew out of recruiting. After we went to UCLA I thought more than one time about trying to get him to come with us, but David was a Kansas boy and he wanted to play at Kansas.”

Rodgers had a great quarterback at Kansas in Bobby Douglass, and said he was sorry he didn’t get to coach Jaynes in games.

“I loved David,” Rodgers said. “He was the perfect guy to play quarterback. He had all the skills.”

Rodgers went 20-22 in his four seasons in Lawrence with a 9-1 regular-season record and Big Eight title with a one-point loss to Penn State in the Orange Bowl in his second year, followed by a 1-9 record in his third.

“Whoever thought I’d be 85 years old,” Rodgers said. “My God! Hello! It’s been 49 years since I was hired as coach at Kansas. I’m real excited about coming back.”

Then Rodgers broke into song over the phone:

Up at Lawrence on the Kaw

He roared and said, “See, I still know the words.”

And his words still command respect from members of the greatest collection of football coaches Kansas ever has seen.

“He still thinks I’m a graduate assistant,” said Donahue hired as head coach at UCLA at the age of 31 and retired from coaching at 51. “He’ll be expecting me to drive him around and he’ll be ordering me around, expecting me to go get his coffee, get him a hot dog before the game.”

So if nobody beats him to it, Donahue will drive him, deliver his hot dog and keep his coffee cup full.