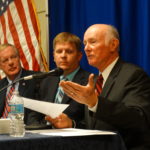 TOPEKA ? A task force that Gov. Sam Brownback appointed in June is recommending sweeping changes to the way state officials forecast how much revenue the state will take in each year, including how much of that information is disclosed to the public.

That would include stopping the current practice of issuing reports comparing how much the state actually collects each month with official estimates of how much the state was expected to collect, reports that in recent months have exposed significant shortfalls that are likely to lead to large spending cuts later in the fiscal year.

The report was released Tuesday, one day after the Department of Revenue reported that tax collections in September came in nearly $45 million short of projections and that the state now faces a potential $62 million shortfall for the current fiscal year.

It was the fifth consecutive month in which revenues failed to meet projections, and the 10th month out of the last 12. In fact, revenues have fallen short of projections more often than not since 2013, when the large-scale tax cuts that Brownback championed during his first term went into effect.

That has prompted many people in state government to debate whether the tax cuts had a more profound impact on revenues than forecasters predicted at the time or whether the forecasting process itself is flawed.

“This is not just a response to the environment that we’re in,” said Sam Williams, a retired Wichita businessman who led the task force. “Our responsibility was to get above the environment we’re in and say, ‘What would be best practices?'”

But Sen. Tom Holland, D-Baldwin City, the ranking Democrat on the Senate tax committee, questioned the idea of halting the monthly comparisons between actual and projected tax collections.

“For the life of me, I cannot figure out why we would take away from policymakers information they need to make state policy,” he said. “It sounds to me like someone who doesn’t want to be held accountable for past policy decisions.”

Since 1975, Kansas has relied on what is called the Consensus Revenue Estimating Group, which is made up of budget analysts from the governor’s office and the Legislature, as well as economists from each of the state’s three research universities. They meet in secret twice a year to examine trends in the state and national economy that could affect revenues as well as recent trends in state tax collections.

For most of the time that process has been used, past budget officials have said the estimates proved to be highly accurate, except in times when there were sudden and unexpected upward or downward trends in the national economy, or when there have been major changes in tax policy.

But Revenue Secretary Nick Jordan said that for the last two years, two factors have come into play which he said have thrown the estimating process off.

“What we’ve had over the last two years is kind of a storm of tax policy changes and the economy lagging behind,” Jordan said. “That’s not just Kansas. That’s nationally. That’s the states surrounding us.”

The task force made several other recommendations that Wilson said would improve the accuracy of revenue forecasts, as well as the “fiscal notes” that are prepared for tax bills in the Legislature estimating how much revenue would be lost or gained through different policy changes. Those recommendations included:

• Using outside reports about national and global economic trends such as the ones prepared by Moody’s Investor Services, a major bond rating company.

• Performing separate estimates of capital gains taxes, which are part of individual income taxes, because capital gains fluctuate more directly with ups and downs in the stock market and real estate sector.

• And changing the makeup of the Consensus Revenue Estimating Group to include only one economist, selected through a request for proposals, who would work on both economic and revenue forecasts.

Jordan and Budget Director Shawn Sullivan said the administration planned to move forward with as many recommendations as it can on its own. But other recommendations, including the one to stop reporting monthly comparisons between actual and estimated tax collections, would also need approval from the Legislature’s nonpartisan research staff. And still others would require changes in state law.

Senate Democratic Leader Anthony Hensley of Topeka, meanwhile, said he questioned the need for changing the estimating process as well.

Topeka — Kansas lawmakers are considering measures that would require the public disclosure of information from ...