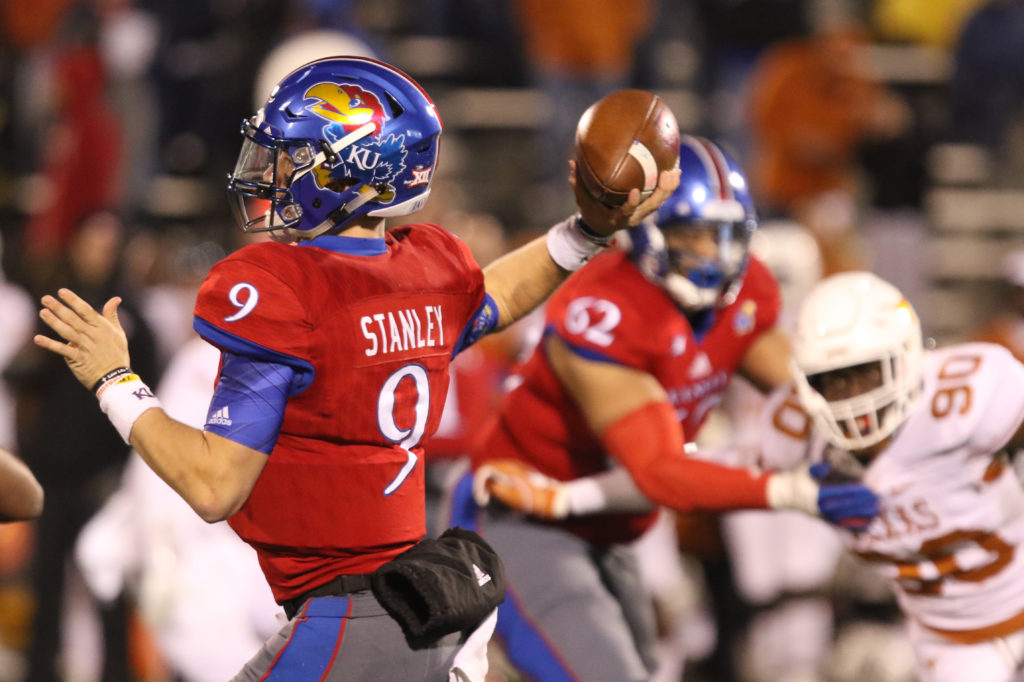 About to make just his third career start, and first on the road, Kansas quarterback Carter Stanley has shown head coach and offensive coordinator David Beaty a lot during the past few weeks — some good, some bad.

In helping the Jayhawks achieve their first Big 12 victory in two years, Stanley, a redshirt freshman, completed just 21 of his 42 passes while throwing for 220 yards against Texas.

Ahead of KU’s season finale at Kansas State (11 a.m. kickoff, FOX Sports 1), Beaty praised the young QB for the crucial plays he made with his feet in the fourth quarter against the Longhorns, when Stanley rushed for 20 yards on one series and 21 on another during the Kansas rally. Plus, Stanley completed nine of 16 passes for 87 yards in the fourth.

“I think the number one thing that sticks out for me for Carter is just his confidence that the rest of that team has in him and just the way that they’re drawn to him,” Beaty said. “The chemistry has been really, really good with him out there. I think those kids respect him because they’ve watched his work ethic, they’ve watched him with class continue to get better, and when his turn was called, he steps up and he makes plays, and he’s fearless. Those runs in the fourth quarter where he didn’t go down and he — that was something I was very, very proud of.”

Still, there is the matter of those 21 incompletions and one interception versus UT. Stanley also nearly threw another pick in the final seconds that would have cost Kansas a win, had receiver Steven Sims Jr. not stolen an interception away in the end zone.

“Got to continue to trust the rules,” Beaty said of Stanley, “and that’s really kind of the thing that all young quarterbacks go through is continuing to go through the rules and not locking onto a guy. That’s where you can get yourself in trouble.”

When Kansas (2-9 overall, 1-7 Big 12) takes on the K-State (6-4, 4-3) at Bill Snyder Family Stadium, one Jayhawk and one Wildcat plan on getting reacquainted. At some points during the rivalry game two former Free State High teammates figure to go toe to toe. Kansas sophomore linebacker Keith Loneker Jr. has known KSU starting left tackle Scott Frantz for years, dating back to their little league days. Now they’ll be on opposite sides of the ball in a series that dates back more than a century. 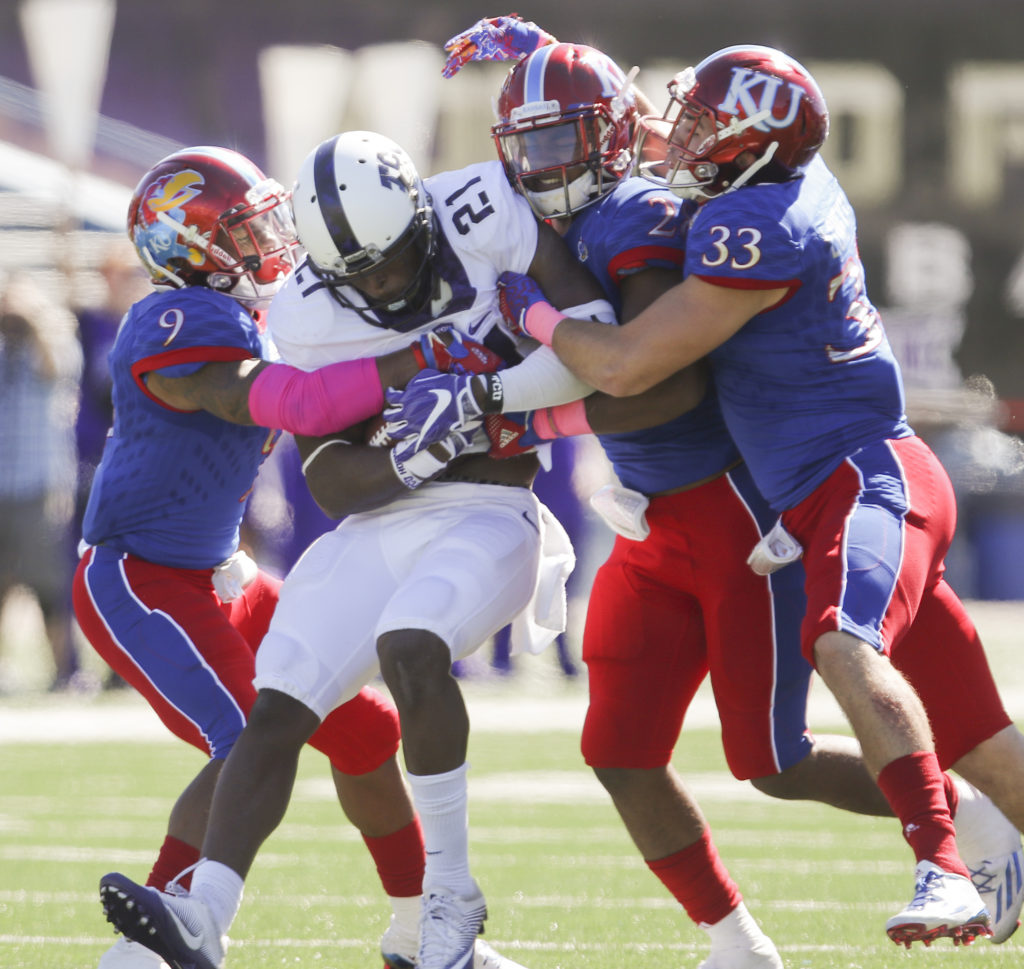 “We both know what we’re about and we both know our little problems and stuff, so it’ll be interesting like that,” Loneker said of both he and redshirt freshman Frantz owning good scouting reports for their battle.

Loneker, who made a career-high 16 tackles against Texas, said the two check up with each other after every game to see how things went. This past week, the two couldn’t resist a little pre-game trash talk.

“Scotty, he sent me a Snapchat of little friendly stuff, but, no, we’re good friends,” Loneker said. “There’s nothing bad there. Just little jabs here and there. I’m real excited to play against him. He’s a great player.”

Win or lose, today is the end of the line for KU’s seniors. As 2016 comes to a close the finality really has started to hit for members of the secondary in particular. While Kansas starts two seniors on defense — end Damani Mosby and linebacker Courtney Arnick — five different defensive backs figure into the two-deep: safeties Tevin Shaw, Fish Smithson and Greg Allen, and corners Marnez Ogletree and Brandon Stewart. 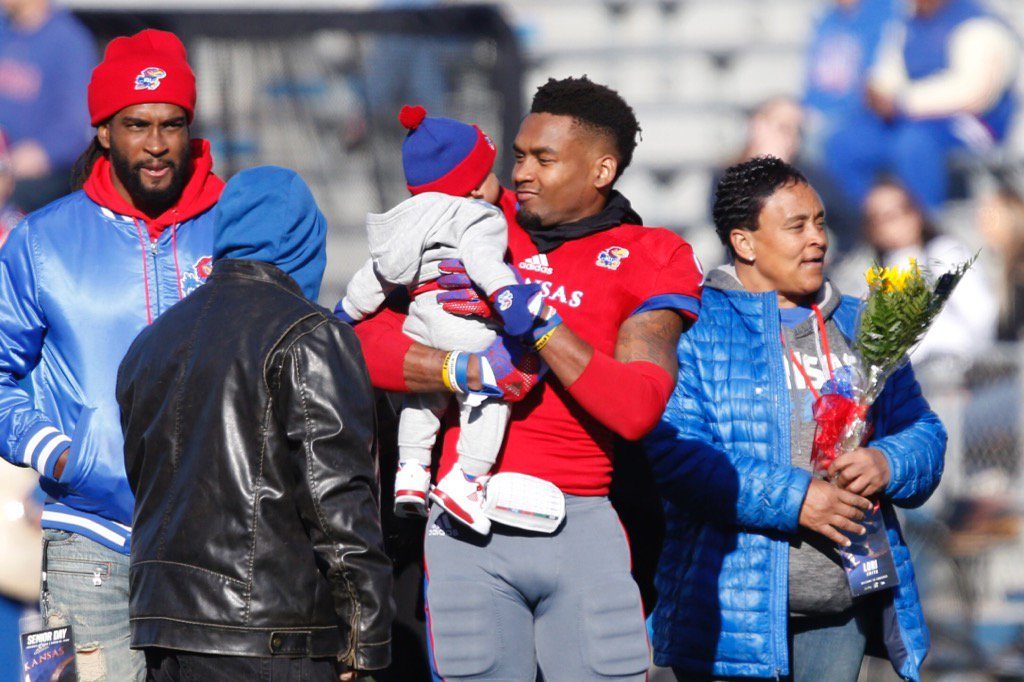 Fish Smithson stands with his family during the pre-game Senior Day ceremony at Memorial Stadium on Nov. 19, 2016. The Jayhawks will play Texas.

Smithson, who leads the defense with 82 total tackles, said the past several days have taken on a different feel for the veterans in the secondary.

“Just us lookin’ at each other and enjoyin’ our moments together, nice moments. I think that’s the biggest thing,” Smithson said. “Just walkin’ around and just knowin’ this is a lot of our last time playin’ here at KU.”

According to Smithson, defensive coordinator Clint Bowen often reminds the seniors of how many days or practices they have left at KU, to put things in perspective.

“Sometimes it’s tough to think about,” Smithson admitted, “but now that we know we just kind of enjoy it day by day.”