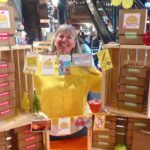 Lawrence artist Stacey Lamb shows off some of the countdown cards she had for sale at a recent craft show. The cards, which countdown to events like birthdays, retirements or holidays, started with a set she made for a friend who was recovering from a bone marrow transplant.

Art has been Stacey Lamb’s refuge since childhood, but she thought two years ago her days as an artist were over.

“I was laid off from a greeting card company after 30 years,” she said. “I didn’t know what I’d do. I thought I’d never draw again.”

Lamb said art has been central to her identity since she retreated to her bedroom as a fourth-grader for a four-day drawing marathon as a way to deal with bullying and abuse at school. The bullying ended when a drawing of Snoopy she made on her notebook during her home retreat caught the eye of her chief abuser, who pronounced it and her “cool.”

“I’ve been an artist ever since,” she said. “My art has always been there for me.”

Lamb earned a degree in fine arts from the University of Kansas and went to work as a greeting card illustrator before getting let go about two years ago. It was a bad time made worse when her close friend Cheryl Wonnell, of Lawrence, was diagnosed with leukemia, but Lamb once again looked to art to deal with her emotions and help her friend.

Two years ago this month, Wonnell received a bone marrow transplant at KU Hospital. The procedure required Wonnell to stay in a germ-free environment for 100 days, first in the hospital’s Johnson County transplant center and then in a room her friends prepared for her in Gladstone, Mo.

“That was a long time for her to be away from her family, home and beloved dog,” Lamb said. “I wanted to give her something that would make the time go by faster, brighten her room and give her something to look forward to every day. I made her 100 little drawings on index cards. I put them in a box with some clothesline and clothespins, so she could take one out every day and hang it up.”

Wonnell said the gift had the intended effect of giving her something to look forward to daily, while reminding her she was one day closer to going home.

“They were absolutely therapeutic,” said Wonnell, who has been cancer free since the transplant. “Mine had a lot of Bible verses. That was great for me. My doctors and nurse practitioners loved them so much, I would let them pick out a card for the day.”

Wonnell’s surgeon was also impressed, seeing in the countdown cards something that meshed with his research into the effects of a positive attitude on patient healing.

“He said, ‘This is exactly what I’m looking for,'” Lamb said. “I managed to find a Lawrence printer and make up boxes of cards, rope and pins for his hospital.”

Since then, some area cancer facilities and children’s hospitals have seen the benefit of the cards and have bought Lamb’s boxes for their patients. Most are of the same countdown concept that she created for Wonnell, but a therapist from Georgetown University Hospital in Washington, D.C., asked her to create cards to teach hospitalized children to count from 1 to 10 forward and backward and from 1 to 100, she said.

“It feels good we are helping lift these little children’s spirits a little higher,” Lamb said. “It makes us feel a little better, too.”

It occurred to Lamb and her husband, Brent Lamb, that the countdown concept could be applied to other occasions like birthdays, weddings, anniversaries and holidays. She is now marketing those as part of her Happy Countdown Cards business with such special decks as those with “healthy living,” “be happy” and “do good-feel good” messages. More details of her product lines can be found at the website Brent designed at happycountdowncards.com.

“I didn’t set out to make this a business,” she said. “It was a gift to a friend I dearly loved. I feel like it came from the heart. It’s re-energized and inspired me. I’m working more hours than I ever have.”