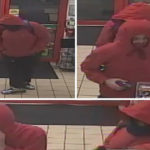 Police are searching for two men who they say robbed a business at gunpoint Saturday evening.

Inside the business, Rhoads said, two black men in their 20s wearing red sweatshirts and armed with handguns demanded money.

The two men then fled the store with “an undisclosed amount of money,” Rhoads said. It was unclear which direction they headed after leaving the scene, she said.

No injuries were reported during the robbery, Rhoads said.

We are seeking your assistance in identifying the suspects in the attached photos, reference an armed robbery that…