Student denies that she posted the Snapchat photo 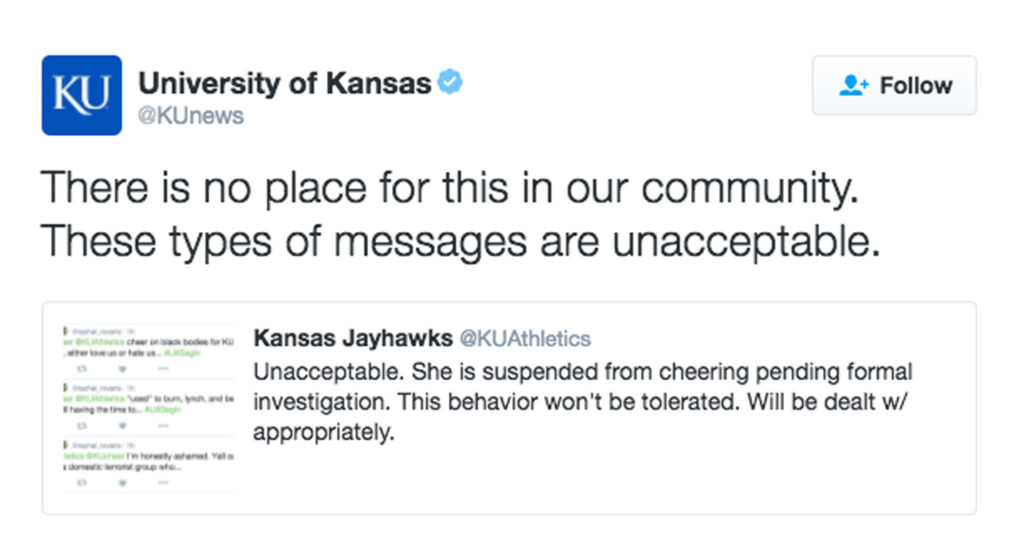 Tweets from the official University of Kansas and KU Athletics Twitter accounts are shown from Nov. 21, 2016. A KU cheerleader has been suspended from cheering after a photo was posted on her Snapchat account linking the Ku Klux Klan with President-elect Donald Trump.

The University of Kansas has suspended four cheerleaders from the squad after a photo with the words “Kkk go trump” was shared on a Snapchat account belonging to one of them.

The female cheerleader whose account the photo appeared on denied that she posted it. KU officials said she and three male cheerleaders in the picture were suspended from performing pending further investigation.

The Snapchat photo shows three men standing next to one another wearing matching red and blue KU holiday sweaters with the letter “K” for Kansas on the front. The Snapchat social media app allows users to add text to photos, and on the photo is written “Kkk go trump.” 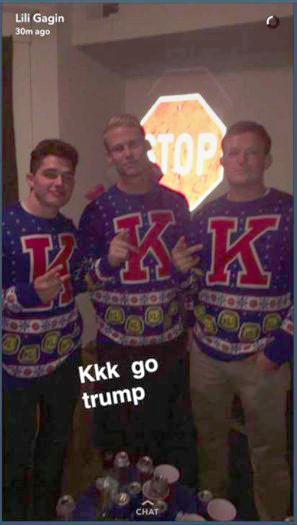 The female cheerleader was suspended from the cheer squad Tuesday night during the KU men’s basketball game against the University of Alabama at Birmingham, played at the Sprint Center in Kansas City, Mo., said Jim Marchiony, KU associate athletic director for public affairs.

She was not cheering at that game, Marchiony said, but that’s when the image came to the attention of KU Athletics via social media and a number of Twitter users shared and commented online.

The woman told KU Athletics officials Tuesday morning that someone else took her phone at a party Saturday night and posted the Snapchat message, Marchiony said. She “adamantly denies posting it” and said she’d left her phone unlocked, Marchiony said.

The three men pictured, also cheerleaders, were suspended from the squad later Tuesday morning, Marchiony said. He said additional discussion and a “desire to treat everyone involved the same” led to their suspensions.

Marchiony said KU Athletics had spoken with all four cheerleaders and communicated with KU’s Office of Student Affairs, which plans to talk to the students as well. Student Affairs is charged with investigating reported violations of the KU student code, including discrimination and harassment.

“We have included the university on this every step of the way,” Marchiony said. “They knew step by step what was going on as soon as we found out about it. We are keeping them involved.” 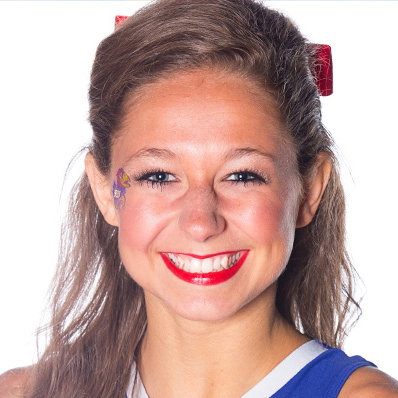 Cheerleaders are not scholarship athletes at KU but do fall within the purview of KU Athletics, Marchiony said.

Marchiony said KU Athletics’ discipline was based on a department rule addressing conduct expected from individuals representing athletics and the university.

The female cheerleader, whose name is on her Snapchat account, is Lili Gagin, listed on the KU Spirit Squads roster as a sophomore from Grayslake, Ill.

Monday night Gagin posted on her Twitter account, which describes her as a KU cheerleader, “I’m appalled that a snapchat was put out on my snapchat and posted on my account. I would never of done that & I apologize that it happened.”

KU Athletics did not release the names of the male cheerleaders or formally release Gagin’s name. Marchiony said she “identified herself” through social media posts.

Monday night KU Athletics shared a series of tweets containing Gagin’s name and tweeted about the Snapchat photo, “Unacceptable. She is suspended from cheering pending formal investigation. This behavior won’t be tolerated. Will be dealt w/ appropriately.” The university’s official Twitter account retweeted KU Athletics’ message, adding “There is no place for this in our community. These types of messages are unacceptable.”

Those tweets by KU Athletics and KU were both deleted Tuesday.

KU Athletics tweeted instead, and KU retweeted, “The four (one female, three male) individuals referenced in the recent Snapchat incident are suspended from performing and will remain suspended while Kansas Athletics and the University complete their inquiries into this incident.”