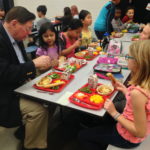 Ed Gerhardt, a retired Army Brigadier General, visits with students during a lunchtime trip to Lawrence's Hillcrest Elementary School, 1045 Hilltop Drive. Gerhardt was treated to lunch and a tour of the school's recent kitchen and dining area renovations, as well as its garden, playground and gymnasium, with fellow retired Army Brigadier General Daryl McCall. The two visited Hillcrest that day as part of their work with Mission: Readiness, a non-profit aimed toward strengthening national security by promoting healthy lifestyles in kids.

“The meal was delicious. Certainly beats the MREs that we ate for so many years,” Gerhardt later deadpanned, referring to the durable and sometimes-bland meal kits distributed to soldiers in combat zones.

Nutrition — along with physical fitness and the overall health of America’s schoolchildren — is the focus of Mission: Readiness, a national nonprofit geared toward strengthening national security by encouraging healthy habits in kids.

Those goals, the retired generals agreed, closely mirror those of the Lawrence school district and Hillcrest, which in 2014 received approximately $67,000 in Food Service Equipment Assistance grant money for the renovation of the school’s kitchen and serving area.

That’s partly what brought Gerhardt and McCall, along with fellow representatives of Mission: Readiness, to Hillcrest, where the former servicemen enjoyed a tour of the school’s recently renovated kitchen as well as its gymnasium and newly added garden.

The Lawrence school district in 2012 began upgrading kitchen equipment to assist in its goal of purchasing and serving more local produce and fewer processed foods as well as standardizing cooking methods and timing. The additional square footage (district employees estimate it at between 1,200 and 1,500 feet) and serving lines, paired with state-of-the art cooking equipment, have allowed Hillcrest staff to prepare more of its food in-house.

Without the added hassle of transporting meals from other schools, said Paula Murrish, the district’s director of food service, printing and purchasing, Hillcrest staffers have been able to serve fresher, healthier meals, oftentimes with produce harvested from local farms.

That’s something that wasn’t always easy to implement at Hillcrest, which basically had “no kitchen” at all prior to renovations, district spokeswoman Julie Boyle said.

“Anytime that you put quantities of fruits and vegetables in a pan and ship it, it’s just gravity — the bottom ones will be smashed,” Murrish explained. “We don’t have to do that here.”

Roughly 10 percent of the produce served in Hillcrest’s kitchen comes from local farmers, Murrish said. On Tuesday, a pile of pears grown and harvested near Eudora sat, ready to eat, on the school’s kitchen counters. Locally grown romaine lettuce, from a farm outside Topeka, has been another mark of success at Hillcrest.

Students, she said, are still getting used to seeing fruits and vegetables with the kind of imperfections and small blemishes often erased through special breeding and pesticides for grocery-store sales.

Also helping in that area: the school’s recently added garden, which is tended to by students, staff and volunteers. On Tuesday, Hillcrest staffers and a trio of student ambassadors led Gerhardt and McCall through the small outdoor plot, where tomatoes, radishes and herbs grow in abundance thanks to mild autumn temperatures.

“We have a lot of lessons through our curriculum, but the coolest part is that the teachers have really embraced this and just taken their curriculum and worked it in,” Denise Johnson, the district’s curriculum coordinator of health and wellness, said of the garden’s role in shaping math, language arts and science lessons.

There’s also the added benefit of physical activity and spending time outdoors, she said, as well as the work ethic instilled in the students who tend the garden.

For Gerhardt, who also worked as a teacher and principal for several years, and McCall, whose mother and grandmother were both teachers, instilling healthy habits in children just makes sense. The earlier the better, they say.

In America, obesity is the leading medical disqualifier for military service, barring 31 percent of young adults from the nation’s armed forces, according to the U.S. Department of Defense.

And while representatives of Mission: Readiness stressed that the aim of Tuesday’s visit wasn’t recruitment, Gerhardt and McCall also pointed out that a readiness for the military also extends to a readiness for living one’s healthiest life.

“We’re certainly not here to recruit for the military, but if a person is eligible to join the military, then they’re also eligible for a whole lot of other things too,” Gerhardt said. “And that expands your options.”