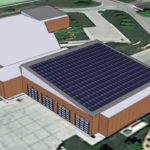 A computer rendering shows solar panels on the roof of Fire Station No. 5, 1911 Stewart Ave. About 1.4 million of sustainability projects have been added to the city’s capital improvement plan for 2017.

The City of Lawrence is preparing to make millions of dollars worth of facility upgrades — including solar panels, LED lights and smart thermostats — in order to make its operations more energy-efficient.

“The savings each year would be the same as taking over 750 cars off the road and planting over 3,000 trees, in terms of an environmental benefit,” said Eileen Horn, sustainability coordinator for Lawrence and Douglas County.

In all, about $11.4 million of sustainability projects have been added to the city’s capital improvement plan for next year. The list of about 40 projects includes sweeping updates to city buildings, parks and facilities. Horn said the scope of the project is exciting.

“We hardly ever get the chance to do a wholesale energy-efficiency improvement,” Horn said. “We do little things as we can, like when we change this light bulb, we put in an LED fixture.”

Updates will include solar panels, energy-efficient windows, new heating and cooling systems, and LED lighting for streets and outdoor recreation areas. Horn said because of the added efficiency, the project will essentially pay for itself.

“It’s ‘Let’s save energy and let’s save money in the process,'” Horn said.

The city’s sustainability efforts have been an ongoing process. In December 2015, the commission authorized joining the state Facilities Conservation Improvement Program. The program develops a contract for cities to balance out sustainability investments with savings gained from more efficient facilities, Horn explained. The savings will be transferred to a debt service fund and used to pay for green bonds to finance the projects, Horn said.

“(The contract) basically guarantees those savings, so that you feel safe up front making a big investment,” Horn said.

After joining the state program, the city hired 360 Energy Engineers to conduct an energy audit of more than 40 city buildings to identify potential energy- and cost-efficient improvements. When those findings were received this fall, the commission unanimously voted to authorize 360 Energy Engineers to move forward with the project.

At their most recent meeting, commissioners received an update to the city’s Capital Improvement Plan for 2017 that reflects the estimated costs of the sustainability improvements. Some of the projects include:

• The installation of solar panels on Fire Station No. 5, 1911 Stewart Ave. The installation will cost about $400,000, and the use of solar power will save the city about $13,000 annually and pay for itself in about 30 years, according to a report by 360 Energy Engineers.

• Citywide LED lights and updated controls for facilities, streets and outdoor recreation areas. The estimated cost of the upgrades is about $1.4 million, and the energy-efficient lights will save the city about $130,000 annually, paying for themselves in about 10 years.

• Web-based thermostats. Thermostats connected to the internet will allow the city to more effectively manage and control temperatures. The estimated $60,000 installation cost will pay for itself in utility and maintenance savings in about two years.

360 Energy Engineers will function as the general contractor of the project, and the city put out a bid for subcontractors in October. The commission will review contract proposals for the work in January.