Kansas judges, justices ahead in retention fight, despite big-money campaign 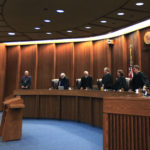 Five Kansas Supreme Court justices and six Court of Appeals judges appeared to be headed toward retention late Tuesday, despite an unprecedented campaign to oust some of them.

As of 10:30 p.m., with nearly half of all precincts reporting, all of the judges and justices on the ballot were ahead in their retention races with at least 57 percent of the vote.

On the Supreme Court, Chief Justice Lawton Nuss, along with Justices Carol Beier, Dan Biles and Marla Luckert, were all targets of massive negative ad campaigns, ostensibly because of their decisions in several death penalty cases, including a 2013 decision to vacate the death sentences of mass murderers Jonathan and Reginald Carr.

A group called Kansans for Justice, which was founded by victims of the Carr brothers, spent more than $633,000 on television ads alone, according to figures from the Brennan Center for Justice. But other conservative groups were involved in direct mail campaigns as well, including the anti-abortion group Kansans for Life and the Kansas State Rifle Association.

Kansans for Life had also targeted four of the six Kansas Court of Appeals judges on the ballot for ouster over their votes to block enforcement of a new Kansas law banning a certain type of abortion procedure.

Another group, Kansans for Fair Courts, campaigned to retain all five justices on the ballot, including Justice Caleb Stegall, Gov. Sam Brownback’s only appointee to the court, as well as all six Court of Appeals judges. That group spent nearly $524,000 on television ads, according to the Brennan Center.

Those estimates were based on advertising reports filed with the Federal Communications Commission. Kansas law does not require disclosure of campaign contributions or spending in judicial retention races.