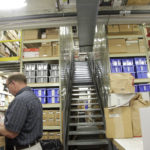 City commissioners talked about the need to quicken plans for a new headquarters building for the Lawrence Police Department during a discussion Tuesday about the city’s five-year capital improvement plan.

Under a new draft of the plan released Tuesday, the police department is slated to receive $1.5 million for design of a new facility, which the department has advocated for in recent years.

City Manager Tom Markus told commissioners Tuesday they should reopen discussions about the issue and select a site. He stipulated that, in a cost-saving measure, the site should be one already owned by the city.

“This has been a major issue of discussion,” Markus said. “What I recommend we do is we get back into a workshop discussion on this item.”

The five-year plan also included more than $1 million in coming years to repair the department’s existing building. That, in part, was added to show commissioners the cost of not taking action, Markus said.

“That’s deferred maintenance — to repair cracks, plumbing, those types of things,” Chief Tarik Khatib said. “It’s to make it habitable, not a renovation.”

Khatib said the overall value of the existing facility was $1.6 million.

“I want to make sure that gets settled up, because it doesn’t seem to add up,” Commissioner Matthew Herbert said of having both the expense of a new facility and costs of repairs to an old facility on the same plan.

The drafted capital improvement plan shows the police department requested $30 million in 2018 for construction of a new headquarters. As it is now, the plan shows the project going unfunded, but “all options are on the table,” Markus said.

During two hours of public comment later Tuesday about the 2017 budget, more than 30 people spoke mostly to request more funds for the library and affordable housing. No one spoke about funding for a new police headquarters.

In an earlier draft of the capital improvement plan, released Friday, the police department would also have received $274,518 for body cameras in 2017. That expense was added to a list of unfunded projects in the newer plan Tuesday.