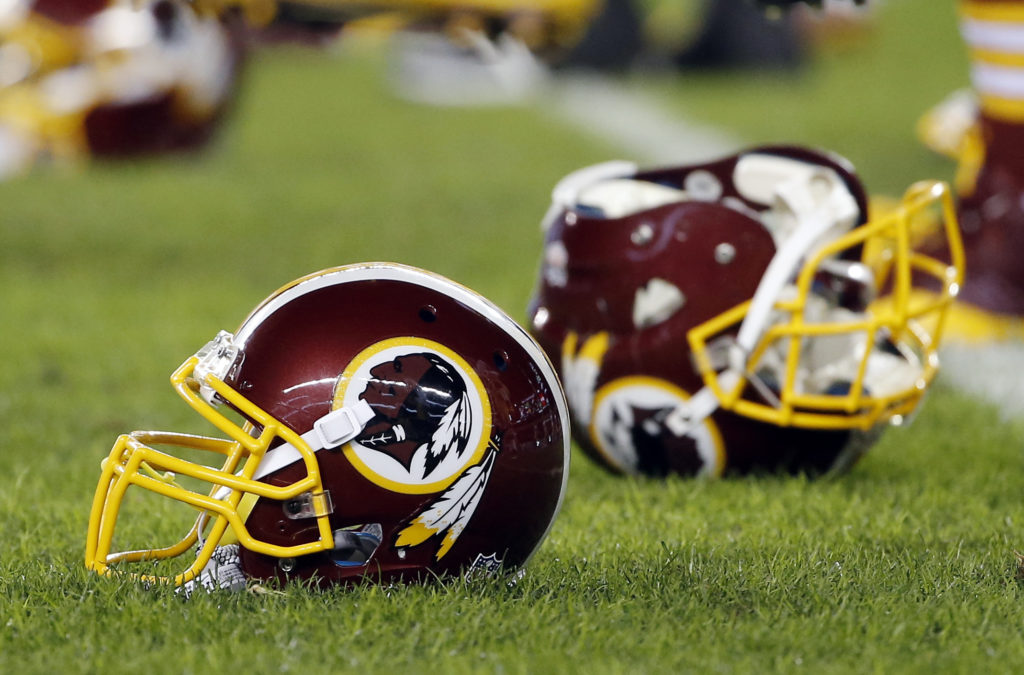 FILE - In this Dec. 26, 2015, file photo, a Washington Redskins helmet sits on the field as players warm-up before an NFL football game against the Philadelphia Eagles in Philadelphia. (AP Photo/Matt Rourke, File)

But as many as a new Washington Post poll claims?

“I guarantee you you’re not going to get a number like nine out of 10,” said Dan Wildcat, a Yuchi member of the Muscogee Nation who teaches indigenous and American Indian studies at Haskell. “There is something wrong with that methodology.”

The Post on Thursday published a story reporting that, according to a poll initiated by the newspaper, nine in 10 American Indians aren’t offended by the Redskins’ name.

Among Indians reached over a five-month period ending in April, more than seven in 10 said they did not think the word “Redskin” was disrespectful to Indians, the Post reported. An even higher number — 8 in 10 — said they would not be offended if a non-native called them that name, according to the Post.

But Indians at Haskell aren’t buying it, at least not a number of them reached Thursday by the Journal-World.

“It’s definitely a racial slur, and I think that it’s the equivalency of the n-word.”

The Post article quoted one man who said he liked the team name and that Indians call other Indians “skins,” too.

Haskell student Terrence Littlejohn, who just finished his junior year, said that word isn’t used by anyone in his world. He actually refers to the pro-football team aloud as “the Washington racial slurs.”

Littlejohn is both Indian and black, he said. He’s a member of the Arapaho Tribe of Oklahoma, and also Jamaican and Samoan.

Littlejohn called the term redskin “malicious,” and just as bad for Indians as the n-word is for black Americans.

Fellow Haskell student Kyndall Noah, a senior and a member of the Choctaw Nation of Oklahoma, agreed.

“I don’t think there’s any kind of differentiating the two words, they’re both racial slurs to me,” Noah said. He also likened its use to calling Hispanics “wetbacks.”

Faculty members Wildcat, Marshall and Rhonda LeValdo guess that a formal survey at Haskell would yield results directly opposite of the Post’s.

LeValdo, an Acoma Pueblo tribe member who teaches media and communications at Haskell, said she’s done informal polls about the Redskins in her classes. Usually two or three students say they don’t care and more like 90 percent say they’re against the name, she said.

LeValdo has an opinion about the word redskin.

LeValdo said the word misrepresents who Indians are as people. It not only puts them “in a past description,” she said, but it also misrepresents what they actually look like. A glance around Haskell reveals students who may look Asian, hispanic, black or completely white — but they’re all enrolled tribal members, LeValdo explained.

Just two weeks ago, the woman leading a legal charge to change the name of the Washington Redskins spoke at Haskell’s commencement ceremony. 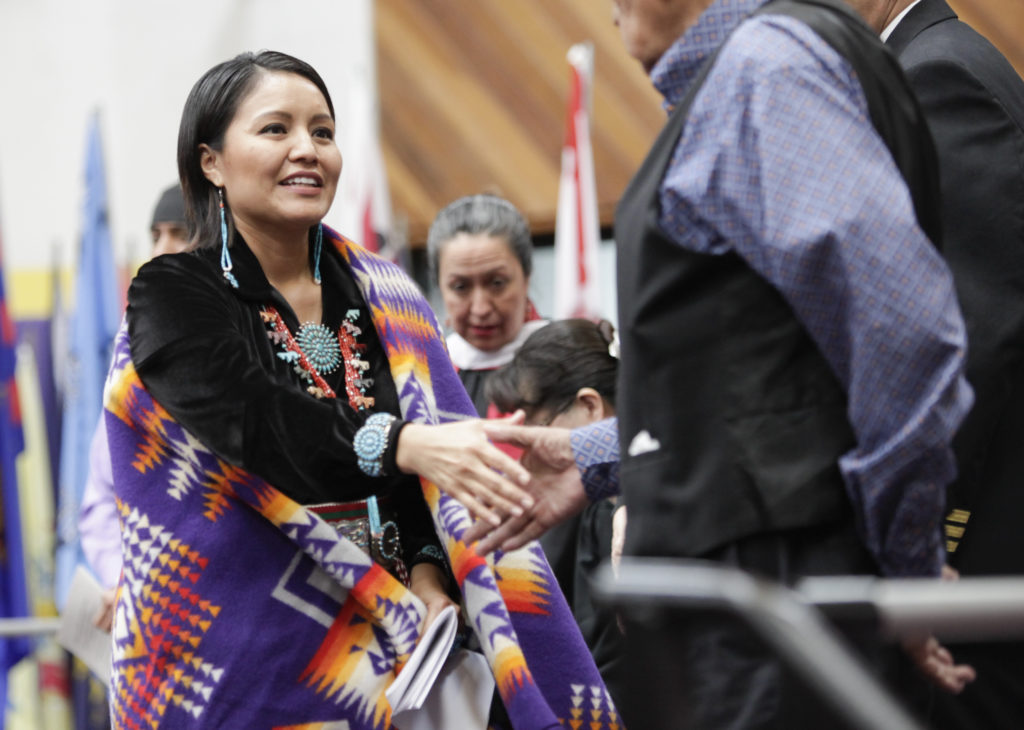 As a result of the lawsuit, in June 2014 the United States Patent and Trademark Office’s Trademark Trial and Appeal Board canceled the Redskins’ trademark registration, calling it disparaging to American Indians. The ruling does not force the Redskins to change their name, but advocates consider it a milestone in an ongoing battle.

Blackhorse told the Post its survey “trivializes” the damage the team’s name has inflicted on Indians.

“There’s no validity to this poll. Stereotypes are wrong and they’re demeaning. The Washington team name is a dictionary defined racial slur, that we do know,” Blackhorse said in the Post article. “If the Washington Post knew anything about the native community, they would know it is almost impossible to poll our nations, and it may come as a surprise, but there are more than just 500 of us.”

That’s another problem Haskell faculty members had with the poll.

There are 567 federally recognized American Indian and Alaska Native tribes, according to the U.S. Department of the Interior’s Bureau of Indian Affairs. Census results indicate there are about 4.5 million Indians and Alaska Natives in the United States, but according to the bureau less than half of them — just under 2 million — are enrolled members of federally recognized tribes.

The Post’s poll counted opinions of 504 adults. According to the newspaper, it was conducted by randomly calling cellular and landline phones and questioning only people who identified themselves as Native American, after being asked about their ethnicity or heritage.

“We have a lot of people in the United States who have the great-grandmother syndrome. Their great-grandmother, they heard, was a member of some tribe so they think of themselves as being American Indian or native,” Wildcat said. “Members of federally recognized tribes reject the notion that someone can just claim to be native or Indian.”

Haskell is open only to enrolled members of federally recognized tribes.

Wildcat said that while there’s definitely not a “100 percent consensus” about the Redskins, even among enrolled tribal members, he thinks the Post poll “runs in the face” of what official tribal nation leaders and their constituents say.

Redskins owner Daniel Snyder, who has staunchly defended his team’s name, celebrated the findings of the Post poll.

“The Washington Redskins team, our fans and community have always believed our name represents honor, respect and pride,” he said in a statement published by the Post. “Today’s Washington Post polling shows Native Americans agree. We are gratified by this overwhelming support from the Native American community, and the team will proudly carry the Redskins name.” 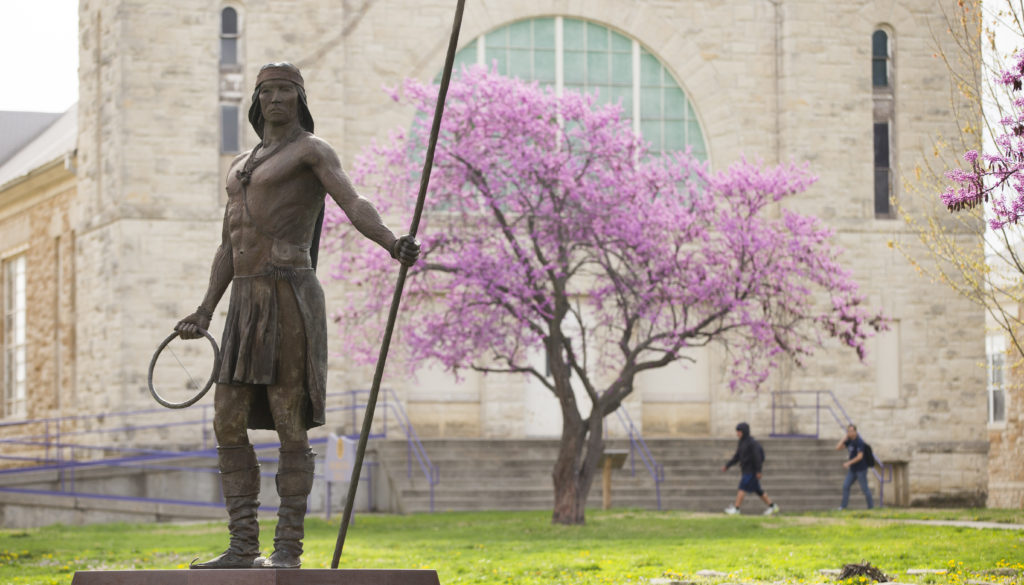 Blackhorse, in her keynote speech at Haskell’s commencement, said she thinks all teams with Indian names and mascots should reconsider whether they’re appropriate — even Indian schools, the Haskell Fightin’ Indians included.

Among Indians, opinions about that definitely vary.

Wildcat said he’s OK with the Florida State University Seminoles, for example. Their team name isn’t a slur or a generalization, it’s the specific name of the Seminole Tribe of Florida, leaders of which have actually supported and helped guide its use there.

Redskins, however, is a “racist colonial description” in no way analogous to the FSU and Seminole Tribe of Florida cooperation, Wildcat said.

Redskins — completely unacceptable — is at the top, he said. 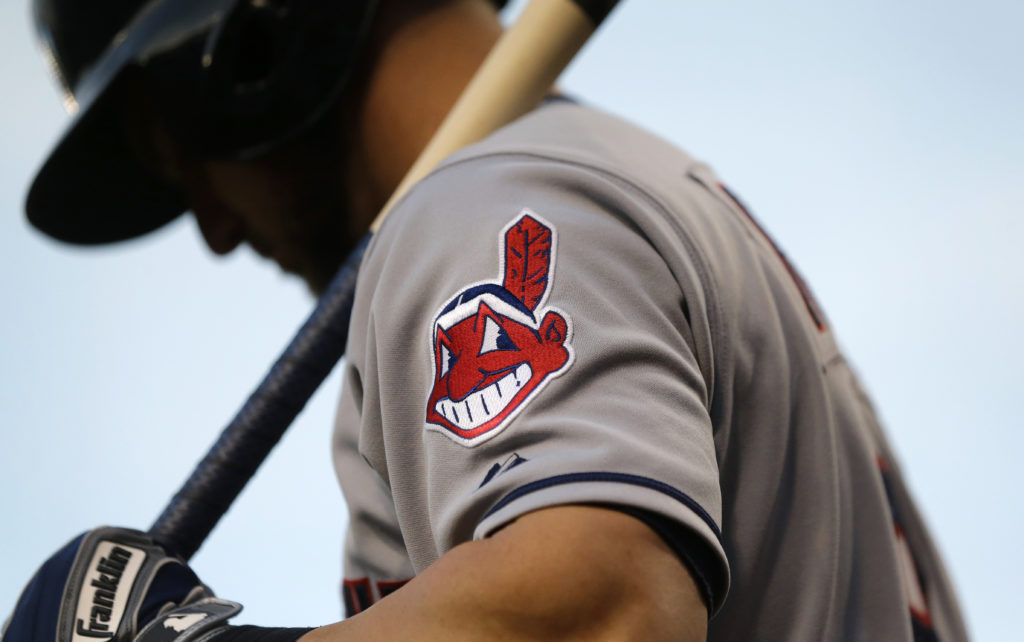 The Cleveland Indians logo is emblazoned on Ryan Raburn's jersey as he prepares for an at-bat during a baseball game against the Baltimore Orioles, Friday, June 26, 2015, in Baltimore. (AP Photo/Patrick Semansky)

Teams with more “ambiguous” names like the Kansas City Chiefs and the Atlanta Braves are lower on his list, Marshall said. He has mixed feelings about them, somewhat dependent on how the names originated and the ways the teams represent Indian culture.

Julia Good Fox, a Pawnee Nation member and Haskell’s acting vice president of academics, said Snyder or the NFL would never use mockeries of black or hispanic Americans as sports logos.

She said calling Washington’s team the Redskins is “a symptom of this country’s failure to acknowledge its past.”

“This denial of the past allows them to dehumanize another group of people in a way that would not be acceptable — in fact there would be a national outcry — if done today to another population of people,” Good Fox said. “If the majority of the United States is not upset or does not see what is wrong with using these types of mascots, then obviously the issue is much deeper than a simple ‘offended or not’ matter.”