Pat Kehde, co-founder of the Raven Book Store, to retire after 28 years working at shop 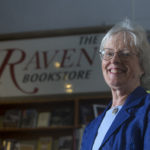 Pat Kehde, former owner of the Raven Bookstore at 6 E. Seventh St., is retiring from the store after 28 years.

It was a date that would live in infamy — at least in Pat Kehde’s mind.

Most people might not be able to recall several years later the exact day another ubiquitous chain store rolled into their neighborhood, but Kehde, the founder and former co-owner of the Raven Book Store, has reason to remember Dec. 6, 1992.

“Well, it was the best day we ever had,” Kehde says, referring to the opening of the now-shuttered Borders at 700 New Hampshire St.

The books that have meant the most to Pat Kehde

Pat says: “I picked up the second volume when I was a teenager and was blown away by the use of the English language, so rich and so vivid and so clear. It started a lifelong interest in World War II.”

Pat says: “My seventh-grade teacher read this aloud to us, and the Florida piney wilderness was so real to me. Later in life I got to go to (Rawlings’) cabin in rural Florida and it looked just like I imagined.”

Pat says: “All Sayers’ mysteries are wonderful and it was hard to pick one. But this one not only has the dazzling Lord Peter dressed in a harlequin suit diving off a high fountain into a pool of water, it has one of the clearest condemnations against the culture of advertising and consumerism that I know of.”

Pat says: “I re-read this recently and I was surprised by how absolutely brilliant it is. The characters of Huck and Jim are without equal. The last chapter is problematic, but you can just stop reading before Tom enters the story.”

Laura Ingalls Wilder’s “The Little House in the Big Woods”

Pat says: “The whole series of ‘Little House’ books is enthralling to me. She creates such a complete world and one that I still like to visit.”

Journal-World archives indicate that Kehde was actually about five years off — the store opened to much fanfare on Dec. 6, 1997, which she correctly remembers as a Saturday — but it’s still pretty impressive.

Prior to the big day, Kehde had launched a massive campaign to halt the superstore’s arrival in historic downtown Lawrence. Thousands of postcards printed and distributed by Kehde and her volunteers, inscribed with messages from concerned citizens, were sent to the city commission in protest. Their efforts, of course, weren’t entirely successful, but did boost awareness — and sales.

“People came in by the droves to buy a book. They didn’t have to buy a book or want a book — they were going to buy a book” regardless, Kehde says of that blessed day in December 1997. “It was really, really an amazing thing.”

After nearly 28 years in business, the “little bookstore that could,” as one Journal-World article described the Raven on its 25th anniversary, is still going strong.

Defying expectations — lasting longer than the estimated five-year lifespan, surviving and ultimately triumphing over the big-box rival, maintaining a fiercely loyal clientele in the age of Amazon and ebooks — has been Kehde’s modus operandi for a long time now. It’s also her proudest achievement of a career that will end, officially this time, by the end of this month.

An open house with cake and beverages is on the books (pun intended) for 2 to 5 p.m. Saturday. The celebration will take place during Kehde’s last three-hour shift at the store, where she has worked part-time since handing the keys over to current owner Heidi Raak in 2008.

Kehde had planned to retire when she and co-founder Mary Lou Wright sold the place, but stayed on to help with Raak’s transition and then some.

“She doesn’t stop,” Wright says of her old friend (the two met more than 50 years ago as students at Scripps College) and business partner. “I don’t know if that’s a sign of brilliance, but it’s certainly something that I admire — people that keep going like that.”

At seventysomething, the former librarian (Kehde prefers not to reveal her age, citing concerns about competition on her tennis circuit) with a near-encyclopedic knowledge of mystery novels isn’t slowing down much, if at all. With her Saturdays suddenly free, Kehde plans on keeping busy with volunteer work at her church, knitting, tennis (naturally) and research for a rather ambitious chronicle of the history of downtown Lawrence businesses.

Kehde believes the hippies who cultivated the area’s first funky boutiques in the 1970s fundamentally changed the nature of downtown, which she says resembled a “typical Kansas” main street before emerging as the dynamic city center it is today. “I like to think that we’re kind of in the tradition of that even though we came 10 years after that,” Kehde says of the Raven, which she opened with Wright in September 1987.

At the time, she recalls, the 600-block of nearby Massachusetts Street wasn’t much. But in the 16-month period surrounding the Raven’s arrival, Free State Brewing Co. had also opened for business. So too, had Liberty Hall’s video store and its renovated theater, which had previously been a “trash heap.” That stretch of downtown was dead, she recalls, and “now everything’s happening here.”

Kelly Barth, who has sold books at the Raven since 1997, credits Kehde.

“It’s kind of a salon in that way, because of the kind of person Pat is,” Barth says of the shop. “She’s created this meeting place for people to talk about arts and culture and current events, which is what books are all about. It really is kind of a cultural hub for the town, and she’s largely responsible for that.”

For many Lawrence readers, “Pat really is the Raven,” says Heidi Raak, who admits to “being scared for like, three years straight” after purchasing the shop. Luckily, she had an experienced teacher in Kehde.

Throughout her 28 years at the Raven, Kehde experienced the phenomenon of “Harry Potter” (she remembers a “line all the way down the street” for one book’s midnight release — “thank you, J.K. Rowling”), the arrival of the Raven’s first computerized inventory system, the establishment of the Langston Hughes Creative Writing Awards (Kehde, along with Wright and former Lawrence Arts Center executive director Ann Evans, helped found the Lawrence literary honors in the late 1990s) and the advent of ebooks. Amazon and similar retailers were and are a concern, says Raak, but she’s confident in the steadfastness of Kehde’s regulars.

A lot of those people, “life being what is,” have since passed on, Kehde acknowledges. Recently, she was flipping through a photo album of the store’s 20th anniversary celebration when Wright told her to stop and spare herself the heartache. Too many familiar faces, now dead and gone.

“And that’s the way it is in life. They get older and they die,” Kehde admits. “So it’s good to have Heidi getting new, young people in.”

Still, there’s been more joy than tragedy in Kehde’s tenure. In a couple more years, the Raven will turn 30, and she plans on being there. “I think we should have another big party,” she says to Raak, though it is more an instruction than a suggestion.

“I told Heidi when she first bought the store, ‘Heidi, I love to come to work every day.’ And I think that’s very true,” Kehde says. “When you own your own small business, you do everything from cleaning the toilet to cleaning the cat box to ordering the books to talking to New York publishers. You can’t imagine how much work it is, but it’s a lot of fun, too.”

“I think that if you enjoy it,” she adds, “then other people probably enjoy it, too.”