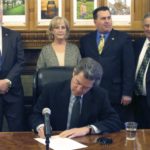 Topeka ? Kansas Gov. Sam Brownback has until April 8 to act on a school funding plan approved by legislators in hopes of satisfying a recent state Supreme Court order.

The Republican-dominated Legislature delivered the bill to the GOP governor’s office Tuesday. The state constitution gives Brownback 10 days to review the measure.

Lawmakers approved the bill last week to give the Supreme Court adequate time to review it.

The high court ruled last month that the state isn’t giving poor districts their fair share of more than $4 billion in annual state aid. The justices said lawmakers had until June 30 to fix the problems and threatened to shut down schools statewide.

The plan redistributes $83 million in aid for the 2016-17 but prevents any school district from losing money.

? The ABCs of school finance: How we got here and where we go next