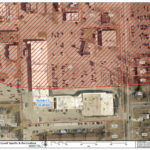 This map shows the proposed location of a private gun range at 711 W. 23rd St. in relation to the 1000-foot buffer zone created by nearby Lawrence school district property.

Going against recommendations from both city staff and the local planning commission, the Lawrence City Commission made a vote Tuesday that will put a gun range in a city shopping center.

Commissioners voted 3-2 to deny Lawrence businessman Rick Sells’ request to establish a shooting range in a vacant industrial building at 1021 E. 31st St., near the 31st and Haskell intersection.

Sells has said over the last two months that if the site weren’t approved, he’d pursue a backup location at The Malls, directly between a yoga studio and barbershop adjacent to the intersection of 23rd and Louisiana.

Because that location is already zoned to allow a shooting range, the plan does not have to go to the City Commission for approval. His site plan for The Malls has received approval from the city planning office.

Mayor Mike Amyx, Vice Mayor Leslie Soden and Commissioner Stuart Boley voted against a rezoning that would’ve allowed for the gun range at 1021 E. 31st St. Commissioners Matthew Herbert and Lisa Larsen voted for the shooting range to be located there.

Tom Markus gets to work as Lawrence city manager

“I gotta tell you, if this business had been on this corner before we decided to build there, we probably would not have selected this property,” Kimball said.

Amyx mentioned in previous discussions on this issue that he made a “screw up” by encouraging the school district to locate there.

Soden said the situation set up a “false choice” that should be avoided in the future.

In its two dozen pages of correspondence on the issue, the city received none in favor of The Malls location. Sells said he’d contact the owner of The Malls on Wednesday about securing his lease.

“I’m not mad; I have a second location, and I’ll move on,” Sells said. “It’s forced me to open a gun range at a busy intersection. If the people of Lawrence have a problem with that, they can come up here and talk to these people.”

A previous version of this story included an incorrect reference to the location of the Malls shopping center.