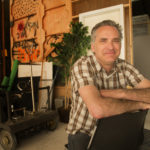 Bob Hurst, associate professor and director of graduate studies in Kansas University's department of film and media studies, will premiere his new documentary about Headquarters Counseling Center at 7 p.m. on Tuesday, March 22, 2016 at Liberty Hall, 644 Massachusetts St. He said the premiere will also serve as a fundraiser for the Lawrence-based suicide prevention organization.

A listener can make all the difference in the world.

At Headquarters Counseling Center, volunteers speak on the phone daily, even hourly, with callers considering suicide or with those who have already hurt themselves, said former volunteer Kristine Chapman. But before volunteers are allowed on the phone in what is often a life-or-death situation, they must learn to listen.

“It’s such a fundamental thing that’s overlooked, being able to really listen to people regardless of what they’re talking about,” Chapman said. “It’s so simple it’s complicated.”

Chapman said she began volunteering at Headquarters in 2008, and from 2009 through 2013 she was director of volunteers.

In the fall of 2013, filmmaker Bob Hurst was there to capture one of Chapman’s training classes, following just more than a dozen men and women as they completed 100-plus hours of training in an 11-week period.

On Tuesday, Hurst, who teaches in Kansas University’s department of film and media studies, will premiere his new documentary, “The Listeners,” at Liberty Hall.

The premiere will also serve as a fundraiser for Headquarters, Hurst said.

Each year, Headquarters fields approximately 25,000 calls seeking help from around the country. Not every caller is suicidal; drug use, depression and infidelity are also common topics.

The documentary’s title pays homage to the volunteers on the phone working to help a perfect stranger through what is often the most difficult day of his or her life, Hurst said.

With more than 150 hours of footage, Hurst said he only recently put the final touches on the film.

“I’ve been picking at things for the last couple of weeks,” he said.

A successful Kickstarter campaign last spring raised nearly $20,000 to help fund the editing process and commission a score for the documentary, Hurst said.

In all, however, Hurst estimates the documentary cost far more than that.

“I mean, if you include in-kind hours, there’s probably $200,000 of time and investment,” he said. “Basically I’ve been working for free on this thing for years. But I teach at KU and I’m fortunate that basically part of my job description is to make films and not to worry about getting paid.”

Getting paid wasn’t Kortney Rist’s goal when she volunteered at Headquarters, either.

Rist, who is featured in Hurst’s documentary, said she began volunteering at Headquarters during her sophomore year at KU and the experience changed her.

As a psychology student, Rist said her experience at Headquarters was “invaluable.” She recalled transitioning from role play training calls to actually staffing the phones.

“I remember going into my first actual shift and I was shaking,” she said. “On a role play if it goes badly, they talk you through it. If it goes badly on the phone, you really don’t know what’s going to happen. Someone could take their own life, and that’s terrifying.

“That was the hardest pill for me to swallow, that you don’t really have control over this,” she added. “The person calling on the phone really needs you, and at the end of the day you do the best you can.”

Hurst said he missed the deadline to show his documentary at several of the bigger film festivals. All the same, the next few months will be focused on finding an audience for his work.

“The festivals are nice, but that’s not your only audience,” he said. “The big audience for this film is going to be counseling centers, clinics, high schools and universities.”

With the documentary’s debut, Hurst said he hopes his work can make a difference and inform viewers about the current state of mental health issues in America.

Rist said she hopes the documentary can help viewers understand they can make a difference.

“Anybody can help anybody who is thinking about suicide. You don’t have to have some special degree or experience,” she said. “Just your everyday person can and will change somebody’s life if you’re just a really good friend for them or you’re just really there for them.”

“The Listeners” premieres at 7 p.m. Tuesday at Liberty Hall, 644 Massachusetts St. Tickets are $10.