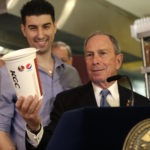 In this March 12, 2013 file photo, New York City Mayor Michael Bloomberg looks at a 64oz cup, as Lucky's Cafe owner Greg Anagnostopoulos, left, stands behind him, during a news conference at the cafe in New York. Bloomberg had a unique record as a public health crusader who attacked cigarettes, artery-clogging fats and big sugary drinks with as much zeal as most mayors go after crack dens and graffiti.

Topeka ? The Kansas House advanced a bill Thursday that would prohibit local governments from regulating the nutritional content of food sold in restaurants, vending machines or other retail establishments.

House Bill 2595 is an example of what’s commonly known as “anti-Bloomberg” legislation, named after former New York City Mayor Michael Bloomberg, whose administration tried to ban the sale of large sugary drinks in the city.

That law was eventually overturned by a state court in New York as an unconstitutional violation of the principle of separation of powers.

Mississippi, the state with the highest rate of obesity, passed a similar measure in 2013.

The bill in Kansas would provide that only the Legislature can enact regulations governing food nutrition or “consumer incentives” offered with food and nonalcoholic beverages served in restaurants, retail food establishments and vending machines.

Those consumer incentives include things such as toys that come with kids’ meals in fast food restaurants, as well as contests, games, prizes and other incentives that are offered to encourage people to buy certain foods or meals.

“Someone might find your Dr Pepper has too much sugar and you’d have to sell Gatorade instead,” he said. “There are many, many examples of those types of applications. And again, what we’re looking for is consistency and uniformity here.”

During hearings in the Commerce Labor and Economic Development Committee, several agriculture organizations, including the Kansas Livestock Association, supported the bill, along with the Kansas Beverage Association and the Kansas Chamber of Commerce.

Opponents included the Kansas Rural Center, which argued that the bill’s language was so broad that it could interfere with several kinds of local healthy-food initiatives.

“Efforts to expand local food systems including farmers markets, community gardens, hoop house production, or other community efforts that support the growth of farm to consumer food access are all at risk of mired growth and economic vitality with this bill,” the Kansas Rural Center said in an email statement to its members.

Rep. John Wilson, D-Lawrence, tried unsuccessfully to re-refer the bill to the Agriculture and Natural Resources Committee for further hearings.

“This bill would, I think, be harmful to hundreds of innovative and evidence-based programs and initiatives designed to improve the health of Kansans, but especially children and teens,” he said.

He also argued that the bill would interfere with the idea of local control over local issues and policies.

“And until the state shows a strong interest in doing these things, I still think the solutions are best left up to local units of government,” he said.

The House gave first-round approval to the bill on a voice vote. A final vote is expected Friday.